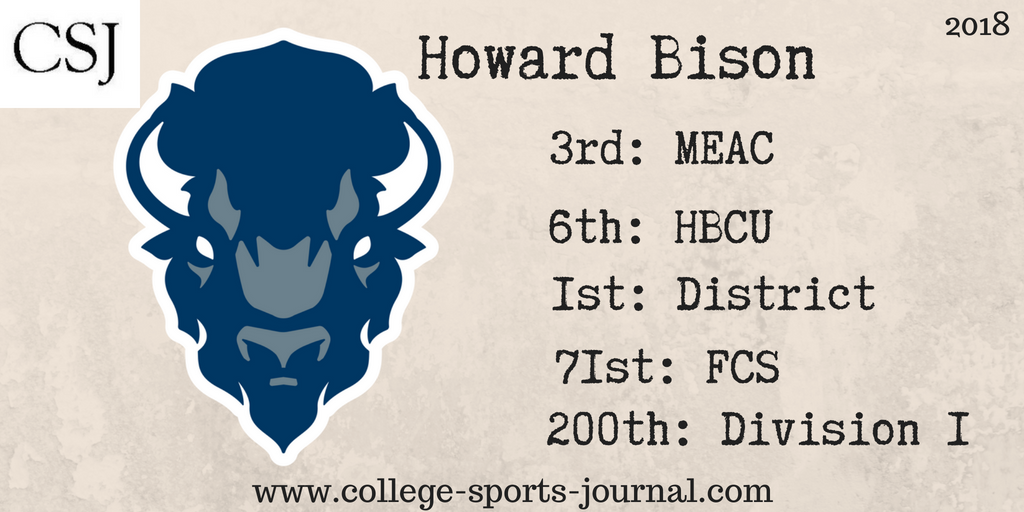 2017 In A Sentence: Head coach Mike London made an enormous splash last season by going to Las Vegas and pulling off what could be considered one of the greatest FCS over FBS upsets in history, upending UNLV 43-40 in a game where the Bison were a 45 point underdog.  Though the Bison didn’t win the MEAC title, not a soul was upset but the resurgence of the Bison program as they finished 7-4.

Key Player: It was always destined that QB Caylin Newton was to be a big deal as soon as he stepped onto Howard’s campus, but even the best writer of fiction would have had a hard time conceptualizing how quickly he would step out of the shadow of his older brother, Carolina Panther QB Cam Newton.  As a true freshman, the Atlanta, GA native was not just a one-game wonder, showing eye-popping dual-threat skill in scoring 25 TDs, 13 passing and 12 rushing.  What has to be scary for the rest of the MEAC is that there’s still plenty of his passing game yet to develop fully – he can still work on his footwork and accuracy.  The sky is the limit, but can he make another big leap as a sophomore after his incredible freshman season?

Fearless Prediction: The Bison won’t be surprising anybody anymore, and for certain, Howard is in line to build on their historic season from last season.  If they can beat Bethune-Cookman in the Circle City Classic and travel to North Carolina Central the following week and upset the Eagles, they’ll have an excellent chance to finish MEAC play undefeated (because they are not scheduled to play North Carolina A&T).  But I suspect that it won’t be that easy, and that for a second straight year they’ll compete and to well, but finish just short.