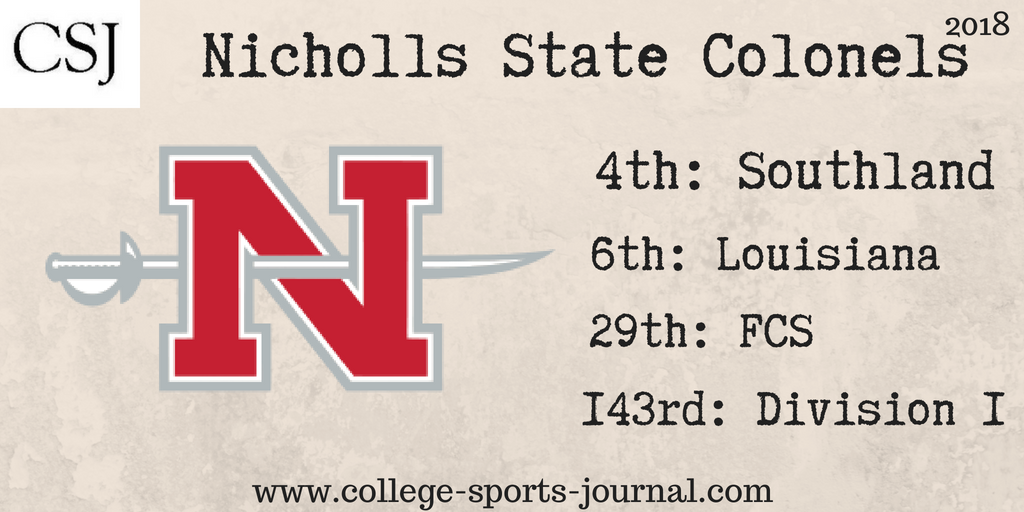 2017 In A Sentence: After shocking McNeese State in the first week of the season thanks to a late field goal, the Colonels surprised everyone but themselves by finishing with an 8-3 record and qualifying for one of the final at-large bids to the FCS Playoffs and the Colonel’s first appearance in the postseason since 2005.

Biggest Shoes to Fill: One thing that is scaring the rest of the Southland Conference is that Nicholls basically returns all their top players on both offense and defense.  One productive defender that is lost to graduation however is big 290 lb DT Marcel Andry, who got 5 1/2 sacks in head coach Tim Rebowe‘s rotation on the defensive line.

Key Player: He has a last name that many New Orleanians recognize, and junior QB Chase Fourcade in 2018 will be looking to build on the legend of his last name.  (His father, Keith Fourcade, was a linebacker at Ole Miss and the New Orleans Saints, and his uncle John Fourcade, was a QB at Ole Miss and former starter on the New Orleans Saints.)  As a sophomore, Chase burst on the scene with 2,316 yards passing and 14 TDs, but was erratic, throwing 13 interceptions and completing only 54% of his passes.  Chase needs to improve on those numbers if the Colonels hope to compete for the league title.  Will he?

Fearless Prediction: A young Nicholls State team surprised many last year and contended all season for the title, though an ugly 66-13 loss to Sam Houston State pointedly demonstrated that the Colonels still had some ways to go.  This year Nicholls runs a rough gauntlet to start the season – at Kansas, at Tulane, and at McNeese, that last game a critical conference matchup that the revenge-minded Cowboys have circled on their schedule.  If Nicholls beats McNeese again, anything is possible for them for the rest of 2018.  If not…