On Tuesday, tickets for The Celebration Bowl went on sale for the general public, but the teams still have work to do and games to win to have their tickets punched.

Over In the SWAC the remaining two unbeaten teams in conference play, Alcorn State and Grambling will face off on Saturday in the house that Robinson built.

The surprise team to this point in the MEAC has been Hampton. The Pirates stand 4-2 overall with a 3-0 conference record and controls their own destiny as far as the conference title and Celebration Bowl is concerned. Its week 8 of the 2017 season and we’ll take a look at the most important matchups this week in HBCU football.

Hampton is sitting in the very place that Pirate fans envisioned themselves when Coach Connell Maynor arrived from Winston-Salem State with a 45-6 head coaching record and an appearance in the Division 2 National Title game. Maynor has built the Pirate program back slowly, only earning 14 wins in his first three seasons but now the Pirates find themselves tied for 1st place in the MEAC along with Aggies and Eagles from North Carolina. If the Pirates are to make the post season for the first time since 2006 then Saturday is a must win. Saturday is homecoming and there’s a group of Rattlers from FAMU that plan on spoiling the party. Florida A&M is much improved than they were a year ago but is currently sitting at 2-5 overall and 1-3 in the conference, which means that their Celebration Bowl hopes are all but over. Nothing would satisfy the Rattlers more than to seriously damage Hampton’s post season hopes with an upset with on Saturday.  If the Rattlers are to pull the upset they must find a way to move the ball on the Hampton defense which is ranked in the top four of the conference in total defense, rush defense, pass defense, and scoring defense.

On paper this game looks like a serious mismatch. Jackson State is off to their worst start since 1969 at 0-6 and is coming off of a 33-7 loss to Division 2 Tuskegee. This week Jackson State announced a few changes to their coaching staff to hopefully get things on track. Meanwhile the Jaguars from Baton Rouge are getting healthy and are poised to make a run at a conference title and potential Celebration Bowl berth. The Jags control their own destiny which gives Jackson State extra incentive to knock off their rivals from Louisiana. This game is one of the most intense rivalries in all of FCS football and strange things usually happen in this game which is known unofficially as The BoomBox Classic. Coach Odom’s of Southern knows better than anyone how a team outmatched on paper comes into this game and pulls the upset. Back in 2012 Odoms was in game 1 as an interim head coach and his Jaguars upset the eventual Eastern Division Champion Jackson State in Jackson. The key to the game with be the play of Austin Howard of Southern and the rush defense of Southern which has improved tremendously after    their Swiss cheese impersonation down at Alcorn a month ago. Southern controls their own destiny and must win on Saturday to continue to control their own destiny while the Tigers of Jackson State have nothing to lose. 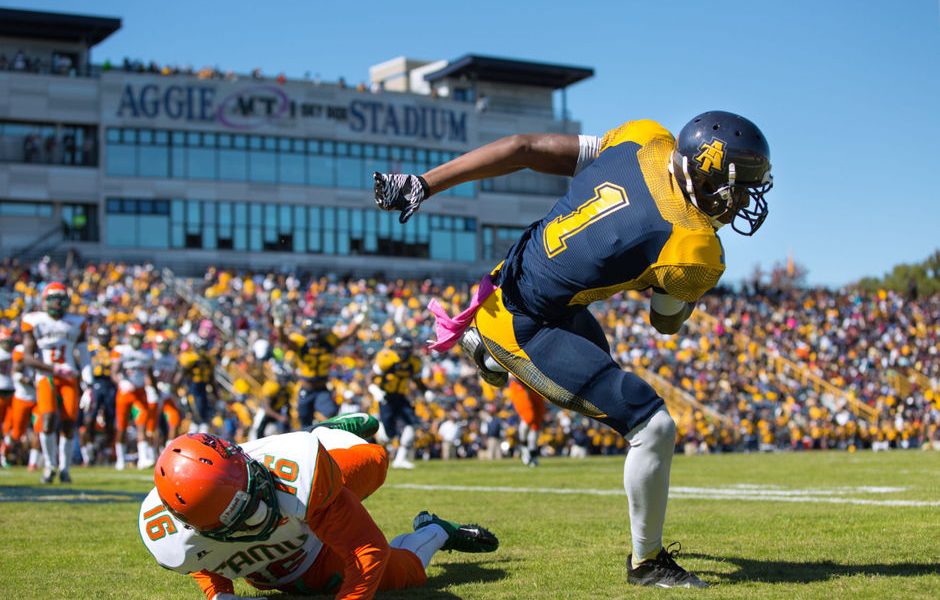 The Wildcats have an opportunity to get back atop the conference race but to do that they have to go to Greensboro and defeat the #11 ranked Aggies. North Carolina A&T has looked unstoppable during the first 7 weeks of the season and even when they haven’t clicked on all cylinders they’ve still won convincingly. The Aggies have the number one defense and number one defense in the conference and have 3 candidates for the MEAC’s Player of The Year Award. The Wildcats of Bethune-Cookman know that a win is needed to reserve any hopes at post season play.  Quarterback Larry Brihm could be the X-factor for the Wildcats on Saturday. Brihm has passed for 1080 and is dangerous running the football as well which could cause problems for the Aggies. The Aggies are looking to creep into the top 10 rankings and continue to add to the resume of an historic season. The Aggies are undefeated and have been one of the most dominant teams in the country. Quarterback Lamar Raynard leads the league in total offense and 20 touchdown passes, running back Marquell Cartwright leads the conference in rushing and rushing touchdowns, and receiver Elijah Bell leads the conference in receptions, receiving yards, and receiving touchdowns. The Aggies of North Carolina A&T looks like a team on a mission but the Wildcats of Bethune-Cookman looks to derail that mission on Saturday in Greensboro.

For the fourth season in a row, the Eagles find themselves at the top of the MEAC standings with some company. The Eagles are 5-1 and ranked 25th in the national polls but are being overlooked again. Once again the talk of the MEAC is the neighboring Aggies. North Carolina Central has beaten North Carolina A&T three years in a row but the yet and still the Eagles find themselves overlooked. Another reason why the Eagles are overlooked is they haven’t been as dominant as A&T. So far this season the Eagles have won 4 games by 7 points and have trailed in the second half twice this season. Despite that the Eagles are 3-0 in conference play and have extended their conference win streak to 18 in a row. It may not be pretty but the Eagles have found a way to win games week in and week out. This week the Spartans of Norfolk State come calling after a close loss to rival Hampton a week ago. The Spartans are a different team than they were at the start of the season and they’re looking forward to showing the conference that they are still a contender for the conference crown. These two have met up in the last two conference title games and were predicted this summer to meet again for the conference title this season. The Tigers of Grambling looked like the Grambling of a year ago with their dominant performance against Prairie View in The Cotton Bowl two weeks ago. A week ago on The Reservation, Alcorn welcomed in Prairie View and fell down 14-0 before showing their dominance in the 34-21 win. These two teams are the final remaining unbeaten teams as far as conference records go in the SWAC. Saturday’s contest will not be void of playmakers on either side off the ball for either team. Devante Kincade was named the conference’s preseason Player of The Year and Alcorn quarterback Lenorris Footman saw that as a challenge. So far this year Footman leads the conference in passing yards and passing touchdowns. Could Saturday be a preview of the conference title game? That remains to be seen but one thing for sure is that Saturday’s contest is without a doubt the Game of The Week in HBCU football this week!