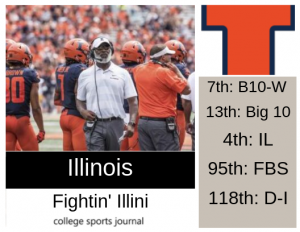 2017 In A Sentence: A case could be made that under Lovie Smith there was some improvement in Champaign thanks to the Fighting Illini’s 4-8 record. A closer look however reveals some wins against subpar opponents (FCS Western Illinois, hapless Rutgers, awful Kent State, and bad Minnesota) and some humbling losses (63-0 to Iowa).

Key Player: QB Brandon Peters, a graduate transfer from Michigan with two years of eligibility left, is intriguing. The odd man out in Michigan’s QB situation, he decided to transfer to a Big 10 opponent and is immediately in the mix at starter with QB A.J. Bush graduating and QB M.J. Rivers transferring.

Fearless Prediction: Can Lovie Smith transfer his way into bowl eligibility? With still an extremely young team, the transfer brigade can shore up a lot of holes that the Fighting Illini have – if everything works out. It looks a lot more likely that another four-win season is in the cards once again unless Illinois can spring a major upset or two along with their easy out-of-conference schedule.