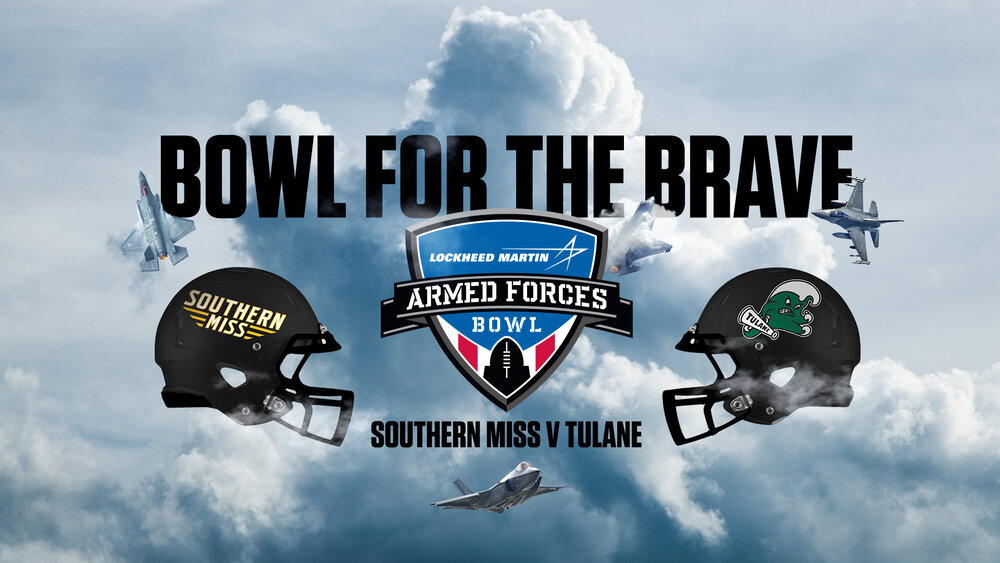 Southern Miss and Tulane renew the “Battle for the Bell” rivalry after a nine-year hiatus with the fi rst-ever game played outside of either Hattiesburg or New Orleans. This will be the first time the two schools will meet in a bowl game. The series dates back to 1979 in which the Golden Eagles hold a 23-7 overall advantage
and won the last six games between the two schools.

The Golden Eagles come inoto this game after losing their last two games to FAU and WKU after getting out to a solid start. Of their seven wins only one win came over a bowl team, UAB.

Southern Miss has captured five-straight winning seasons, including four under Coach Hopson, and 23 over the last 26 campaigns. They set a school record for wins in 2011 with 12. The program has now been bowl eligible for the fourth-straight year under Hopson and for the fifth consecutive year overall. Last year, USM missed out on a bowl despite being bowl eligible. The Golden Eagles lost its most recent bowl game (Independence Bowl) to Florida State in 2017, 42-14.

Southern Miss led C-USA after averaging 288 yards per game with QB Jack Abraham coming up with a strong season. He had two four-interception games in the second half of the season and the team lost both contests.

The Southern Miss run defense led C-USA and was 14th in the nation, allowing just 112 yards per game with Mississippi State only team to run for over 200. Tulane likes to run first so this will be another key in the game.

Key Player: QB Jack Abraham completed 67.5 percent of his passes during the regular season, and he ranked in the top 20 in the country with 3,329 passing yards and an average of 8.7 yards per attempt. Abraham has thrown for 18 touchdowns but has also been intercepted 15 times. Only two FBS quarterbacks have been picked off more this season. The key to the pass happy Golden Eagle offense will be Abraham not turning it over for USM to win this game.

The Green Wave have the best unit in the Armed Forces Bowl thanks to their No. 35 offense led by a power running game. QB Justin McMillan (2,229 passing yards, 14 touchdowns, 10 interceptions) is the team’s leading rusher with 704 rushing yards and 12 touchdowns..

Tulane runs the ball about 75 percent of its offensive snaps and seven players have at least 30 carries this season, led by McMillan’s 152 attempts. RB Corey Dauphine is the team’s most effective back on a per-carry and scoring basis with 569 yards on 8.1 yards per carry, along with seven touchdowns. Tulane has average 6.19 yards per snap overall, which ranks 35th nationally and fifth in the AAC.

Tulane is coming off a Cure Bowl victory over Louisiana last year in its first bowl game since 2013. This game is the 14th bowl game in program history.

Key Player: QB Justin McMillian was a transfer from LSU and has been the big play performer for the Green Wave this year. The key for him will be to continue drives either with his own running ability or with the passing game. He will need also to take some long range pass attempts to open up the strong USM defense. He has not turned it over much but that will also be a key to this game for him to hold onto the ball.

Fearless Prediction: These two old rivals meeting in a bowl game as we head to the last football games of the season. The two teams do it oppositely on offense with Tulane liking to run and Southern Miss liking to throw it. The two defenses are similar so turnovers will will be the key to this game. Both teams are coming in struggling towards the end of their seasons but I feel that Tulane has just a little more talent and that will come through in the fourth quarter in a closely contested game in a rather high scoring game. Tulane 38 Southern Miss 35