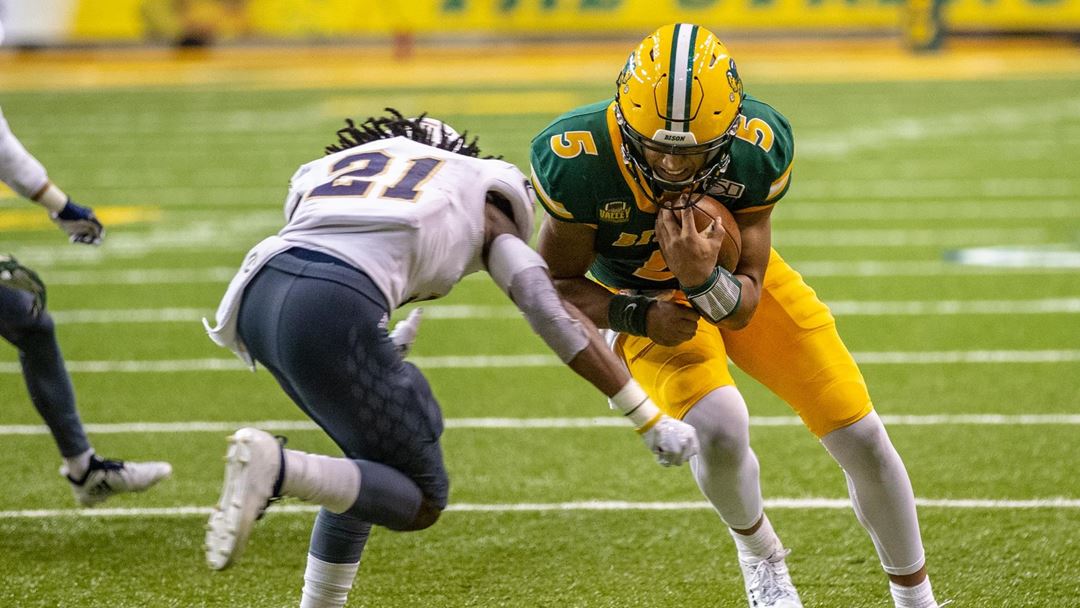 Without question the top FCS game of the week was the battle of FCS powerhouses in the Fargodome.

Returning home after 47-22 victory the week before against Delaware, the heavily-favored Bison had a very tough battle against visiting UC Davis, ultimately winning 27-16 after scoring a late touchdown to finally put the game in the win column for North Dakota State. Three Bison takeaways, including two decisive interceptions in the 4th quarter by Bison SS Michael Tutsie and DT Cole Karcz, were the difference in this nip-and-tuck game that was within a score almost the entire game. Many folks came away from this game hoping they might meet again later in the season in the FCS Playoffs.

“That’s going to happen,” UC Davis QB Jake Maier said of the final interception, which was tipped at the line of scrimmage and ultimately pulled down by Karcz. “You can’t always win. That’s how life works.”

Almost 1,200 miles to the east of the Fight in the Fargodome was a stunning upset. After jumping out to a 28-0 lead, the Idaho Vandals held off a furious Eastern Washington rally to upset the Eagles 35-27 in the Kibbie Dome.
Senior Vandal QB Mason Petrino threw for a season-high 240 yards, tossing two touchdowns and running for another in his first game after being officially named the starter. The final score was a leaping reception by WR Jeff Cotton, who absorbed hits by two converging defenders in the end zone and held on to give Idaho a 35-13 advantage with 7:59 to play.

Another terrific thriller involved Delaware and Penn. The Blue Hens found themselves down two-scores at halftime, but found a way to pull out a 28-27 decision on the back of 21 unanswered points in the second half and a two-point conversion denial in the game’s final moments after Penn RB Isaiah Malcome returned a blocked punt 69 yards to close it to within a point.

There was a great amount of excitement in the world of HBCUs as well. Alabama State used a one yard run by QB KHA’Darris Davis to take the lead and then milked the final six minutes of the game to earn an emotional 23-20 victory over Grambling State in the SWAC opener for both teams. Davis completed 19-of-31 passes for 224 yards and a touchdown, while WR Michael Jefferson finished with eight catches for 81 yards.

“We kept responding to big plays from the offensive side,” Alabama State head coach Donald Hill-Eley said after the game. “KHA’Darris started the game kind of slow, but we found a way to get those guys playing faster. It was also good to see the offense get that last drive where in the past it wouldn’t have happened. Our guys wanted to dedicate the game to our athletic director who just lost her mom, so they want to make this all about her. And it was just good to have them play as hard as did for her and for the university which makes it even better that we came out with a win.”

Down 21-19, a Ryan Stanley 17-yard touchdown pass to Xavier Smith capped a winning rally as Florida A&M defeated SWAC foe Southern, 27-21, in front of a packed house at Bragg Memorial Stadium. Stanley would have 355 yards passing, putting him at 6,753 passing yards for his career at FAMU.

In other thrilling HBCU action, Alcorn State outlasted Prairie View A&M 45-41 in a game that featured more than 900 yards of combined offense, and Arkansas-Pine Bluff upset Tennessee State 37-31 when QB Shannon Patrick threw a 17-yard touchdown pass to Jeremy Brown on the final play of the game.

It was only an upset to Y’ALL, not US‼️ #STATEofMind pic.twitter.com/nIBzYm2WRL