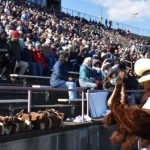 This season, though, there isn’t the same feeling of continuity that permeated many of these other games. Part of that comes from the fact that, unusually for The Rivalry, both teams are packed with young underclassmen, many of them playing in their first Rivalry ever. Normally, The Rivalry is filled with narratives. This season, it feels like the master narrative is waiting to be written with two teams that, even at this late date, have unknowns.