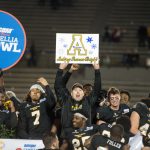 BOONE, N.C. — When coach Jerry Moore took his Appalachian State University football to Michigan for a contest to open the 2007 season, he told his players and coaches to embrace it as a game of opportunity. Nine years to the day of the Mountaineers’ earth-rattling 34-32 upset of the fifth-ranked Wolverines in front of […]