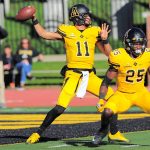 BOONE, N.C. — Earlier this week, Appalachian State quarterback Taylor Lamb reflected on the lessons that the Mountaineer football team had learned from last year’s unsuccessful run at a Sun Belt Conference championship. He insisted that his squad would have better focus as it faced underdog Texas State, before embarking on a potential title-settling showdown […]