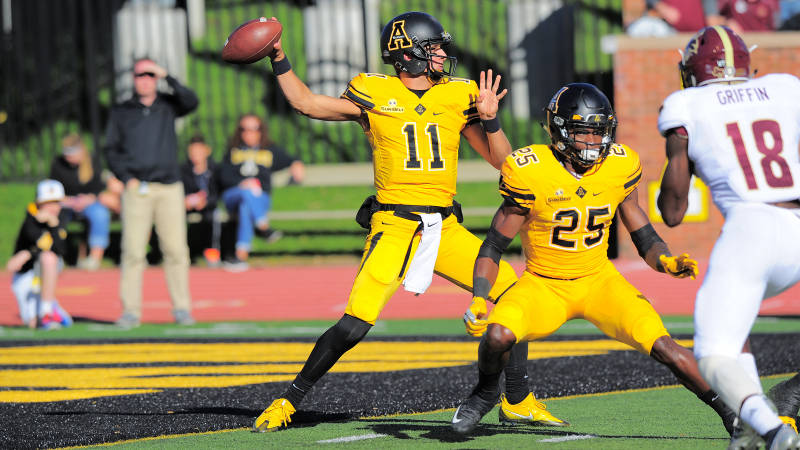 He insisted that his squad would have better focus as it faced underdog Texas State, before embarking on a potential title-settling showdown at Troy next week. And Lamb proved prophetical as the Mountaineers scored their workmanlike 35-10 victory over the Bobcats on Saturday afternoon before 28,472 fans at Kidd Brewer Stadium.

The rushing duo of Jalin Moore and Marcus Cox made Lamb’s job easier with 130 and 118 yards respectively on the ground with 28 combined carries and the Mountaineer defense added another sparkling performance as App State improved to 7-2 overall and 5-0 in conference.

“We kind of lost our focus,” Lamb said of that crucial 2015 schedule stretch. “We’re trying to keep that focus (this year) for the whole season. We’re trying to remember what the goal is.”

The rebuilding Texas State Bobcats (2-6, 0-4) showed some energy early, taking the ball down the field on the game’s first possession to grab a 3-0 lead on Marcus Ripley’s 25-yard field goal, but it didn’t take long for the Mountaineers to regroup.

Sparked by a TSU pass interference call when Lamb went deep for Shaedon Meadors and the quick-stepping runs of Cox, Appalachian took the lead with 4:50 remaining in the first quarter and never looked in the rear-view mirror.

Cox finished the drive by jetting 37 yards for the score and Lamb fired TD strikes to Jaylan Barbour (eight yards), Jaquil Capel (31 yards) and Mock Adams (six yards. It was the first career touchdowns for each of these young receivers.

By halftime, the Mountaineers were comfortably ahead at 28-3.

“Our guys did a really good job in the first half of taking control of the game,” ASU coach Scott Satterfield said. In the second half, “we just closed the game out.”

Appalachian smothered the TSU offense, limiting the Bobcats to 14 yards rushing and 197 yards overall, while forcing one turnover — an Eric Boggs interception to set up one TD — and sacking Texas State quarterback Tyler Jones four times.

“When you have to worry about all of those guys (on the ASU defense), there is going to be a lot of confusion,” said Mountaineer outside linebacker Keenan Gilchrist, who had two sacks on blitzes and tied for the team lead with eight tackles. “We wanted to make them one dimensional (by stopping the run. If we stop the run, we win.”

It was a bittersweet homecoming for Texas State coach Everett Withers, a defensive standout and team captain for Appalachian in the 1980s and a former assistant under Sparky Woods.

“We are past that point of talking about being young, the guys have played a lot of snaps,” said Withers. “I don’t use that as an excuse, that is a cop out. We have miscommunications and we play immature at times. I challenged them at halftime to go play better and I felt like they came out and tried to play better in the second half.”

Lamb’s final TD toss — a three-yard aerial to tight end Barrett Burns midway through the third period — brought the junior signal-caller even with the charismatic Williams in the App State record book.

Williams (2002-05) was a quarterback that Lamb grew up watching and revering as he watched Williams repeatedly terrorize the Furman teams his father (Bobby) coached.

“That’s really cool,” Lamb said of the record. “I remember coming up here and Richie beating the crap out of us. He’s one of the all-time greats here.”

The performance by Cox pulled him within 192 yards of breaking Appalachian’s all-time rushing record of 4,804 yards, held by Kevin Richardson (2004-07). Of even more importance, the health of Cox in the past two weeks, to team with Moore, has brought even more balance to the Mountaineer attack heading into the home stretch of the Sun Belt schedule.