Five players including Austin Gahafer from Morehead State, Ronald Brown from Tennessee State, Tyler Renew from The Citadel, Kahlid Hagens from UT Martin, and David Marvin from Wofford have been selected as the College Sports Journal All-Stars for the week ending November 6th, 2016 in the NCAA Division I Football Championship Subdivision. 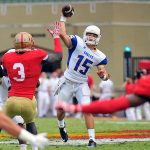 Gahafer threw five touchdowns in a game for the first time this season, leading Morehead State to a 54-28 Pioneer League victory at Butler, Saturday. He completed 34-of-43 passes (79.1 percent) with no interceptions for school-record 465 yards. His five touchdown tosses went to four different receivers. In addition, two Eagles receivers finished with more than 100 yards receiving in the contest. It was the best single-game passing yardage performance in the PFL this season. The effort pushed Gahafer to both the PFL career passing yardage and career total offense records. He finished the game with 11,259 career passing yards and 11,572 yards total offense. 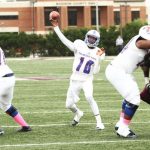 Butler accounted 342 yards of total offense and all six Tennessee State touchdowns, including a 21-yard pass with 1.7 seconds remaining, to lift the Tigers to a 41-40 come-from-behind victory at Austin Peay. The win snapped a six-game road losing streak in OVC play for TSU. The senior completed 12-of-23 passes for 212 yards and four touchdowns while carrying the ball 10 times for 130 yards (13.0 ypc) and two touchdowns. He had touchdown passes of 20, 27, 39 and 21 yards, the final going to freshman Steven Newbold to cap a six-play, 81-yard drive in 1:03 to give the Tigers the victory. On the ground Butler had touchdown runs of 13 and 84 yards; the 84-yarder is the 15th-longest rush in the FCS this season. His 130 rushing yards were the second-most by a quarterback in the OVC this season. 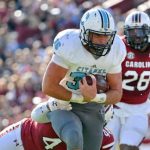 Renew rushed for a career-high 285 yards and a personal-best three touchdowns as The Citadel stayed unbeaten with a 37-34 overtime win over Samford on Saturday. Renew narrowly missed the school mark of 286 rushing yards set in 1988. It was the highest rushing performance in the SoCon this season and the second-highest in the FCS. Renew’s 285 yards was the first 200-yard rushing performance at The Citadel since 2013 and the most by a SoCon player since Georgia Southern’s Jerick McKinnon rushed for 316 against Central Arkansas in 2012. 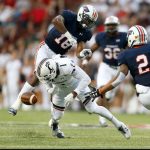 Hagens helped keep UT Martin in contention for the Ohio Valley Conference title and a playoff berth. He totaled a game-high nine tackles (three solo), recovered a fumble and scored off an interception to help the Skyhawks beat Eastern Illinois 33-17 on the road. Hagens jumped on a fumble on his team’s 2-yard line to perverse a lead going into halftime. Late in the game, he sealed the win by intercepting a pass and returning it 52 yards for a pick-six. 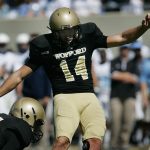 Marvin turned in a strong all-around kicking performance for the Terriers as Wofford held off Furman, 34-27 Saturday. Marvin booted a 54-yard field goal in the second quarter to give the Terriers a 10-6 advantage. He then kicked a 57-yard field goal on the final play of the second quarter to give the Terriers a 20-13 halftime lead. His 57-yard effort tied his own league record for longest made field goal. Marvin previously kicked a 57-yarder against Western Carolina earlier this season. The senior averaged 43.8 yards on four punts and placed two inside the Furman 20-yard line. He averaged 59.5 yards on six kickoffs and forced two touchbacks.