The CSJ’s NCAA Men’s Basketball tournament using the Sagarin rankings to field of the 68 teams that make-up the tournament are currently projecting Gonzaga as the overall number one seed for the week ending January 23, 2022. Another High Major team in Houston is also projected as the second #2 seed. A total of 10 […]

The NCAA Division I Men’s Basketball Tournament bracket was announced on March 14th. The #1 overall seed was from a High Major in Gonzaga, who is the only undefeated team through the regular season. The NCAA tournament begins Friday, March 19th with the four First Four games and will continue through to the national championship […] 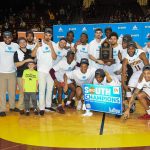 Entering the Big South conference as the 2 seed behind Radford, the Highlanders’ stunning loss to Hampton in the semis meant the Eagles hosted the Pirates in the Big South Championship game, handling Hampton 76-68 to capture its 12th Men’s Basketball title.