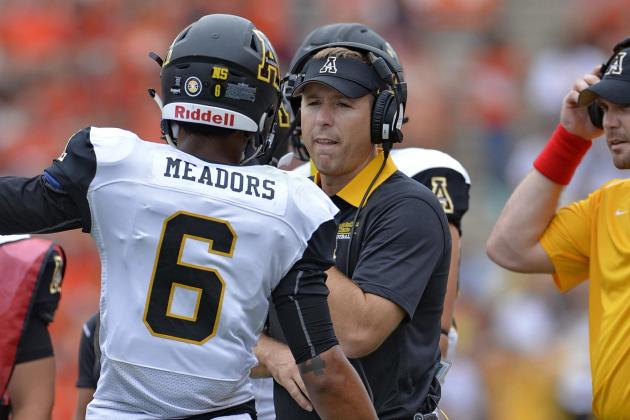 BOONE, N.C. — When Scott Satterfield first encountered Georgia Southern as Appalachian State’s starting quarterback in 1993, it didn’t take him long to develop a distaste for the Eagles.

“There were guys trashing talk and all sorts of stuff was going on,” Satterfield said, as he reflected on the first Southern Conference meeting between these now-bitter rivals on Oct. 16, 1993 at Kidd Brewer Stadium.

The rivalry has now renewed as the two teams are competing in the Sun Belt as Football Bowl Subdivision squads. They will meet for the 30th time Thursday night at 7:30 p.m. in Kidd Brewer Stadium, with an ESPNU television audience looking in.

Both teams are 5-1 this season and sitting on top of the Sun Belt standings.

Georgia Southern is 3-0 in league play, while Appalachian is 2-0. The winner of Thursday’s game will qualify to be bowl eligible for the first time and will be primed to win the Sun Belt championship.

In 1993, the Mountaineers were a 1-5 team, in the midst of coach Jerry Moore’s only losing season at ASU. Coming off a heartbreaking 27-21 loss at Furman the previous week, App State was facing an Eagles team that would win the Southern Conference title in its first season of competition in the league as large underdogs.

Surprisingly, the Mountaineers nearly pulled off an upset, losing 34-28, due in large part to a blocked punt.

“I remember that we never quit until the end of that game,” said Satterfield. “Looking back, that game was the start of things for us. It was all about our mentality and it all began in that Georgia Southern game.”

A year later, the Satterfield-led Mountaineers went to the I-AA quarterfinals, losing to eventual national runner-up Boise State, 17-14 — though they lost at Georgia Southern on a field goal in the final seconds, 34-31.

By 1995, the Mountaineers cruised to 12 consecutive victories (including one at home against the Eagles, 27-17), were ranked No. 2 in the country through much of the regular season and won the Southern Conference title outright before being upset by Stephen F. Austin in the quarterfinals.

“Ninety-Three was the start of that rivalry for me,” Satterfield said. “It has just been real competitive over the years.”

The current App State quarterback, Taylor Lamb, has a long memory of Georgia Southern games, too. But in Lamb’s case, it was growing up as a Furman fan, where his father Bobby was an assistant coach, offensive coordinator and then head coach.

“I remember one year when I was a little kid, we beat them in Statesboro and boy were their fans mad,” Lamb explained. “My mom and I were standing outside the visiting locker room and they started throwing bottles and other stuff at us. We had to find cover to keep from getting hit.”

Georgia Southern coach Willie Fritz, who is just two years into this rivalry and came out the winner last year in Statesboro, Georgia, 34-14, created some controversy this week with comments downplaying the emotions of the matchup.

“I told my guys, this game is worth one, just like last week and just like next week,” Fritz said Monday during the weekly Sun Belt Conference teleconference. “You’ve got to have that kind of mentality if you want to win a bunch of ballgames.”

Fritz is a veteran of 32 years of coaching, but he might not be quite prepared for what will be unleashed on his team on Thursday night.

Fritz might want to checkout a website called Underdogdynasty.com, which titled one of its articles this week “A Feeling Deeper Than Hate — The History Of Appalachian State Versus Georgia Southern.”

Writer Thomas Sherrill proceeded to unveil the key moments in a rivalry that was among the most heated in the Football Championship Subdivision — where the two teams combined for NINE national championships in a 23-year period — and has only gained in potency with the squads moving up together to the Sun Belt.

Among the highlights was the 1987 game, dubbed by the author as the “Ice Bowl.”

On perhaps the coldest game-day ever at Kidd Brewer Stadium, the top-ranked Mountaineers ended Georgia Southern’s two-year, national-championship reign by blanking the Eagles, 19-0, in the I-AA quarterfinals on a field that resembled what the NHL now uses for its annual “Winter Classics.”

Legendary Georgia Southern coach Erk Russell has to be talked into putting on more clothes when he emerged for pre-game activities wearing shorts and a t-shirt.

“Erk, if you don’t put on some warmer clothes, you might DIE out there this afternoon,” a team official told Russell, in a story passed along by recently retired Savannah Morning News sportswriter Don Heath, the longtime Georgia Southern beat writer for the newspaper.

Russell returned to the field “looking like Nanook of the North,” Sherrill said.

Later on, as the temperatures continued to plummet, steam started rising from Russell’s signature bald head — the veteran coach creating his own personal fog bank.

But App State fans had sayings of their own they liked to communicate to the Eagles.

To cap off the burgeoning hatred of these two fans groups, meeting for the first time in the modern history of the programs, a huge ruckus ensued near the end of the game when GSU supporters took exception to App State students, who carved the words “Can You Score?” into the snowy hillside at the far end of the stadium.

While there are numerous other signature moments in this series, probably the one that sticks in the craws of Georgia Southern fans the most was in 2003 when Appalachian upset the 10th-ranked Eagles, 28-21, on the way to forging a tri-championship between the Mountaineers, GSU and Furman for the Southern Conference title.

App State fans celebrated by taking down the goal posts at Kidd Brewer Stadium and starting the typical parade route around town, intent on eventually dumping the equipment in the Trivette Hall duck pond.

Unfortunately, some overzealous students accidentally pushed the posts through one of the windows of the Georgia Southern bus on the way out of the stadium and, to add insult to injury, then trampled a collection of pizzas awaiting the Eagle players and staff as their post-game meals.

Yes, coach Fritz, this is just another rivalry.

Who knows what will be in store when these two combatants meet for the first Thursday night game ever in Boone?