Moore almost single-handedly kept Montana in its game at Appalachian State on Saturday, turning in an awesome performance in defeat, rushing 15 times for 93 yards and catching three passes for 145 yards and one incredible 87-yard touchdown.

Montana rallied for what looked like an equalizing score when running back Dan Moore turned a simple screen pass from quarterback Trent McKinney into an 87-yard touchdown with 8:54 remaining in the game.

But Chris Lider pushed his extra point low and wide to the right and Appalachian State remained in front, 28-27.

He helped Montana rally from a 21-7 deficit to tie the game in the second quarter when he raced 38 yards on another screen pass when the Grizzlies caught the Mountaineer defense in a blitz. That set up QB Trent McKinney's 10-yard scoring scamper. 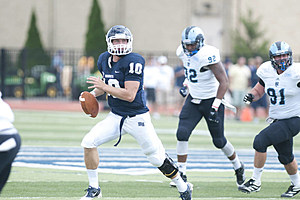 Frazier engineered a game-opening touchdown drive and proceeded to lead Monmouth to a wire-to-wire victory over CAA member Rhode Island.

Helping the Hawks to their second win over a CAA foe in as many seasons, Frazier produced 321 yards of total offense and was named the Northeast Conference offensive player of the week.

The veteran quarterback went 18-of-28 passing for 264 yards and three touchdowns.  Frazier added 57 yards on seven rushing attempts, four of which resulted in at least a 10-yard gain and a first down.

The fifth-year senior capped the opening 13-play, 85-yard drive by finding KB Asante for an eight-yard scoring strike. With the Hawks holding a 17-3 lead in the second quarter, Frazier struck again. He found tight end Michael McLafferty for a 25-yard touchdown pass.

Zenner set career highs for the second week in a row, carrying the ball 34 times for 278 yards and a touchdown as the Jackrabbits earned a 31-14 win at Southeastern Louisiana on Saturday.

Zenner, who was the Missouri Valley Conference offensive player of the week, reached the 100-yard mark before halftime and added a 35-yard touchdown run in the third quarter to help the Jackrabbits pull away for the victory.

Zenner’s yardage total was the most by an SDSU player in the Division I era (previous record 259 by Cory Koenig against Cal Poly in 2007) and was the third-most in school history — 13 yards shy of tying the school record.

In two games this season, Zenner has gained a Division I-best 461 yards and is averaging 8.1 yards per carry.

His 278 yards are the most in a game by a Division I back this season and the second-highest single-game total in all divisions of NCAA football so far in 2012.

Ericksen led the way for the Redbirds in a dominating defensive effort in the 31-14 FBS victory over Eastern Michigan.

The senior, who was the Missouri Valley Conference defensive player of the week, recorded the first two interceptions of his career, added four tackles and broke up a pass that resulted in a third interception in the victory for the Redbirds.

His interception in the second quarter helped preserve a 10-7 lead at the time and his pick in the fourth quarter sealed the victory for ISU.

He was also credited with a pass breakup in the fourth quarter, which he deflected to Mike Zimmer, who returned the ball to the EMU 30-yard line. That play would eventually turn into a Darrelynn Dunn four-yard touchdown run to put the game away.

Overall, the Rebird defense accounted for five turnovers and held Eastern Michigan scoreless in the second half. EMU had just three first downs, 22 yards passing and 54 yards rushing in the final two quarters.

Grier led a defensive effort that held Montana in check, limiting the Grizzlies to just one touchdown in the second half as Appalachian State beat UM 35-27 in one of the most anticipated FCS non-conference games ever.

Grier had 13 tackles, five solo stops, two sacks and three tackles for 12 yards of loss. Three of his tackles came as ASU was trying to end Montana's final drive of the game.

In the final drive, Grier stopped Dan Moore for no gain on the first play, sacked Montana quarterback Trent McKinney for a loss of six yards and then nearly sacked McKinney on a two-yard gain on the next play to force a fourth down.

Fogg had 177 return yards against Norfolk State, including a 77-yard punt return for a touchdown in Liberty's 31-24 loss to the Spartans Saturday

Fogg's touchdown gave the Flames their final lead of the night at 24-19 in the third quarter. He also had a 67-yard kickoff return that set-up Liberty’s second touchdown of the game.

In addition, Fogg denied two Norfolk State two-point conversion attempts with a pair of interceptions in the end zone, keeping the Flames within a field goal both times.

Fogg finished the game with 177 all-purpose yards, a figure that included four punt returns for 93 yards and two kickoff returns for 84 yards.

The All-American was named the Big South Conference player of the week, due largely in part to what was the fourth special teams touchdown return of his career (three kickoff returns for a touchdown and one punt return for a TD).

Fogg also finished the game with a 67-yard kickoff return that could have been 10 yards longer if it was not partially brought back following a penalty.

The return was Liberty’s first punt return for a touchdown since Dominic Bolden returned a punt for a score against Elon in the 2008 season finale.

Defensively, Fogg was one of six defenders to finish the game against Norfolk State with six stops, including a team-best five solo tackles.

Murray helped Fordham nearly pull off an upset at Villanova with his special teams play against the Wildcats on the road on Saturday.

Murray receives his second-straight Patriot League special teams player of the week honor for his effort in Fordham’s 28-13 loss to Villanova.

The All-American punter showed his versatility when he made a pair of second-quarter field goals from 50 and 37 yards out, the first coming just two yards shy of the 52-yard Patriot League record kick he hit last week.

Murray punted five times for a 44.0 average, and also gained 25 yards on a fake punt that set up Fordham’s first-quarter touchdown.

He also earned the College Football Performance Awards placekicker of the week honor for the second straight time. It is Murray’s third career special teams player of the Week honor.

The weekly selections are made by a panel of FCS experts that include the co-owners of College Sports Journal, David Coulson and Chuck Burton.

Coulson is a 35-year veteran of covering college football at every level from Division I to the junior college ranks, including 20 years as the leading written voice of FCS. He authored an award-winning, coffee-table book on Appalachian State's run to the 2005 national championship, entitled "Magic on the Mountain."

A 1980 graduate of Fresno State, Coulson also spent two years as sportswriter for the Los Angeles Times, three seasons running the FCS awards program as the executive director of The Sports Network and was one of the pioneers of College Sporting News in 2001.

Burton cut his teeth in FCS as a student at Lehigh. After graduating, he began the popular blog, Lehigh Sports Nation, covering the Mountain Hawks and the Patriot League in depth.

College Sports Journal also publishes preseason and postseason All-America teams for FCS, national awards honoring offensive and defensive players of the year, a lineman of the year and a special teams player of the year and released the first All-FCS Freshman squad last season, besides its work covering other NCAA sports.

This season, College Sports Journal will also publish weekly freshmen of the week, leading up to the release of the freshman of the year and All-FCS Freshman team in January.

GameWornUniforms.com is the foremost dealer of game-worn uniforms, jerseys and equipment in the world.

Parent company Pro-Am Sports has been in business for over 30 years and currently has the world's largest inventory of game-used merchandise from the NBA, NFL, NHL, Major League Baseball, the minor leagues and colleges — including one of the few places customers can find Football Championship Subdivision merchandise.

Every player identified item comes with a GameWornUniforms.com letter of authenticity.