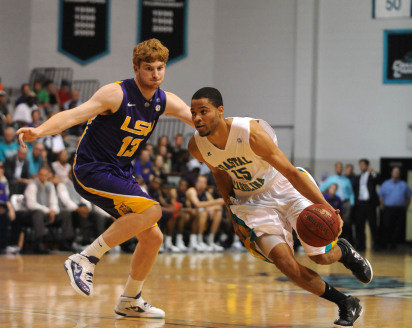 LYNCHBURG, VA. — A fiercely competitive Big South men's basketball season seems to be in store this year.  Our predicted order of finish in each division is listed at the end of each divisional

Campbell begins their 2nd season in the Big South, where they look to improve upon their 3rd place finish a year ago. Point guard Trey Freeman, last year's Big South Freshman of the Year, looks to become the team's leader this  year. Darren White, last year's leading scorer, returns as well. Both White and Freeman were 1st team preseason all conference selections. Kent State transfer Darius Leonard will look to replace some of Eric Griffin's production in the paint. Iowa State transfer Antwon Oliver and VCU transfer Reco McCarter will provide length and athletic ability on the wing.

Scott Cherry and his High Point Panthers must replace 36 points per game of offense with the loss of Nick Barbour and Shay Shine. Redshirt Freshman John Brown, one of the highest rated recruits ever in the Big South, will be tasked as one of the team's go to players. Former Virginia tech and Florida player, Allan Chaney, will resume his career at High Point. Chaney has sat out the last two seasons for health reasons after collapsing during a workout in Blacksburg in April 2010. Chaney was diagnosed with viral myocarditis, an inflammation of the heart, and has since had a defibrillator installed in his chest.

Liberty will have to learn to cope in life after Jesse Sanders. Forward Antwan Burrus will shoulder much of the leadership burden, and he will be asked to pick up a few of the 8 rebounds per game Jesse was grabbing. Dale Layer brought in 4 JUCO players who he will look to immediately contribute. Davon Marshall and JR Coronado are 2 JUCO transfers expected to start.

Longwood finally garnered their long awaited Division I conference affiliation, and will look to make noise in their first  year in the Big South. Coach Mike Gillian and company will have to do so without last season's leading scorer Antwan Carter. Tristan Carey, transfer from La Salle, is the lone returning starter. Gillian calls him "one of the best players in this league." Gillian admitted he voted Carey as preseason player of the  year.

Radford has won 11 games in the past 2 seasons combined, and finished 2-16 in conference play each of the past 2 seasons. Head Coach Mikes Jones will look to improve upon his first season last year, and begin to move Radford up the conference standings. Of the 14 players on their roster, 12 are either freshman or sophomore. Javonte Green will look to improve upon his stellar freshman campaign as the freshman from Brunswick County High School scored 10.2 points and grabbed 6.7 rebounds per game. A lot is expected out of freshman guard Yaya Anderson out of Fluvanna County High School.

The Big South Conference Preseason Player of the Year is VMI's Stan Okoye. Okoye averaged 17 points and 7 rebounds a year ago. Center D.J. Covington enters the season healthy after missing most of last season. Freshman Tim Marshall from Virginia Beach should improve VMI's 3-point shooting immediately, and Coach Baucom hopes this will help VMI regain the #1 spot in scoring offense in the country that VMI relinquished a season ago.

Charleston Southern will be looking to improve their conference record for the fourth consecutive season during the 2012-13 basket ball campaign. Behind the talented sophomore guard duo from Georgia, Arlon Harper and Saah Nimley, the Buccaneers will challenge for the top spot in the South. Saah Nimley was selected 1st team preseason all conference, while Harper was selected 2nd team. The biggest question mark will be how does CSU replace last year's leading scorer and rebounder Kelvin Martin.

Coastal will look to christen their brand new arena, the HTC Center, with a Big South Championship this season. Under head coach Cliff Ellis, Coastal has finished 1st or 2nd in the conference standings the past 3 seasons, but has yet to crack through and win the conference tournament. Guards Anthony Raffa and Kierre Greenwood were selected to the 1st and 2nd team preseason all conference, respectively.

Gardner-Webb will look to improve upon their 6-12 conference mark they have had in each of Chris Holtmann's first 2 seasons as head coach. 2nd team preseason all conference selection Tashan Newsome will look to lead this team alongside sophomore point guard Max Landis.  Freshman shooting guard Isaiah Ivey should see plenty of time as well.

Presbyterian is entering their first season eligible for the Big South tournament championship and NCAA tournament after a five-year transition from Division II. Jordan Downing, a 6'5" transfer from Davidson, looks to make an immediate impact. Downing shot 34% from 3 as a reserve in his one season at Davidson. ESPN broadcaster Mark Jones' son, Shea Jones, is a highly touted freshman. Khalid Mutakabbir is a 2nd team preseason all conference selection.

Who is this UNCA team? That's the big question around the 2012-13 Bulldogs as they seek to replace Matt Dickey, J.P. Primm, and Chris Stephenson. UNCA is coming off 2 consecutive Big South tournament championships and NCAA tournament berths. Center D.J. Cunningham and 2nd team preseason all conference selection Jeremy Atkinson will be the anchors to this year's team. UNCA has 10 freshmen and sophomores on their roster.

Winthrop not only loses their coach, Randy Peele, but also their top 4 scorers from a season ago. This looks like a true rebuilding job for new head coach Pat Kelsey, a Skip Prosser disciple. Kelsey took the 2011-12 season off citing personal reasons; he was quoted as saying "Four years ago I witnessed first-hand Coach Prosser's death in the basketball office at Wake Forest. That day my perspective on the profession and life was forever altered. My role as a father and husband is everything to me and the rigors of this business can make that challenging. My family and my health come first." Kelsey has brought in 4 JUCO players to help get the rebuild jump-started. A couple names still on the roster you may remember: Gideon Gamble, Joab Jerome, and James Bourne.