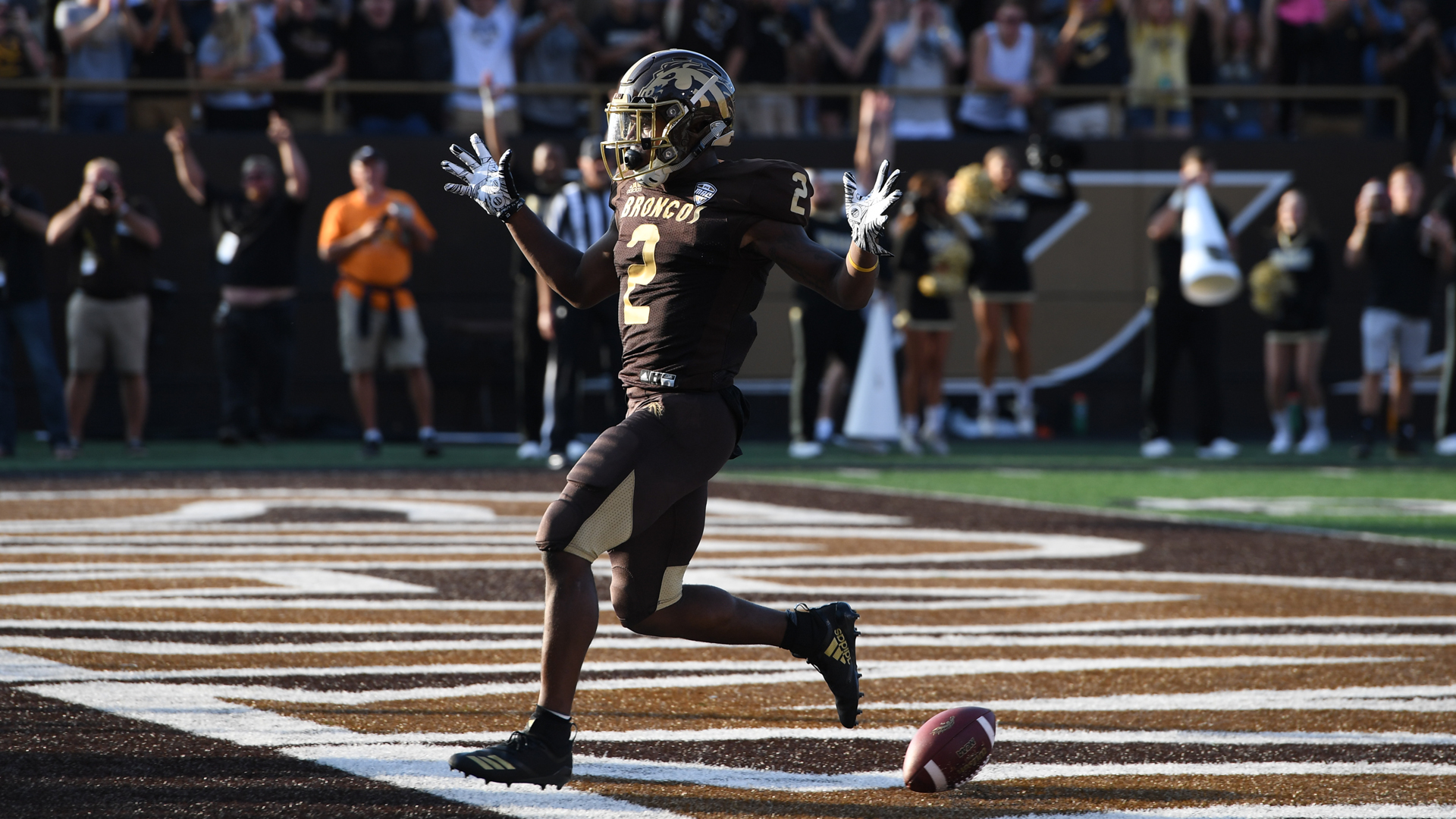 Five players including LeVante Ballamy from Western Michigan, Chevan Cordeiro from Hawai’i, Caleb Evans from ULM, Marcus Webb from Troy, and Hutch White from Texas State have been selected as the College Sports Journal All-Stars for the week ending Nov. 11th, 2019 from the NCAA Division I FBS Group of Five schools. LeVante Bellamy, RB, Western Michigan, Sr., Indianapolis, Ind.
Bellamy ran for the game-winning touchdown with 1:05 remaining in a 35-31 victory over Ball State on Nov. 5. Bellamy rushed for 157 yards on 31 carries and three touchdowns, including one-yard, 16-yard and nine-yard scores, giving him 20 rushing touchdowns this season, a single-season career-high and currently the most in the nation (as of Nov. 8). Both of Bellamy’s touchdowns in the fourth quarter regained the lead for Western Michigan. Bellamy has topped the 100-yard plateau 16 times in his career and seven times this season. Caleb Evans, ULM, QB, Sr., Mansfield, Tex.
Evans accounted for a season-high 401 yards total offense and four touchdowns to lead ULM to a 45-31 Sun Belt Conference victory over Georgia State. He recorded his sixth 200-yard passing game of the season and 22nd of his career, completing 24-of-32 throws for a season-best 291 yards and three scores. His 24 completions and three TD passes also matched season highs. He completed TD tosses of 43 yards to Josh Pederson as well as 1 and 14 yards to Markis McCray. His 1-yard pop pass to McCray gave ULM the lead for good at 38-31 with 7:40 left in the fourth quarter. Evans completed passes to eight different receiver. He also posted his third 100-yard rushing game of the season and sixth of his career, finishing with 16 carries for 110 yards, including a 16-yard TD run in the first quarter. With his performance, Evans moved into second place (ahead of Steven Jyles, 2002-05; 10,234) on ULM’s all-time list with 10,553 career yards total offense. Marcus Webb, Troy, DT, Sr., Decatur, Ala.
Making his first start of the season, Webb turned in one of the most dominating defensive performances in the country this season. He recorded three sacks and a career-best seven tackles. His sack total is the fifth most in the country this year and the third most in a game in school history. Webb led a defensive effort that held Georgia Southern to just 152 rushing yards in the game (3.1 yards per carry) which was the lowest output by the Eagles against a non-Power Five opponent this season; Georgia Southern entered the game averaging 269.2 yards per game on the ground.

Hutch White, Texas State, WR, Sr., Kerrville, Tex.
White, tallied 234 all-purpose yards against South Alabama this weekend. The 234 yards are the second-highest total in a Sun Belt Conference game this season and marks the first time a Bobcat recorded 200 all-purpose yards in a game since 2015. He returned kickoffs for the first time this season and averaged 31.0 yards on two returns and had a career-long 40-yard kickoff return. White also led Texas State with career-highs of 10 receptions for 165 yards, which are the second-highest total in the Sun Belt this season and the most by a Texas State receiver since 2010. White’s 10 receptions also equal his career-high for most receptions in a game.