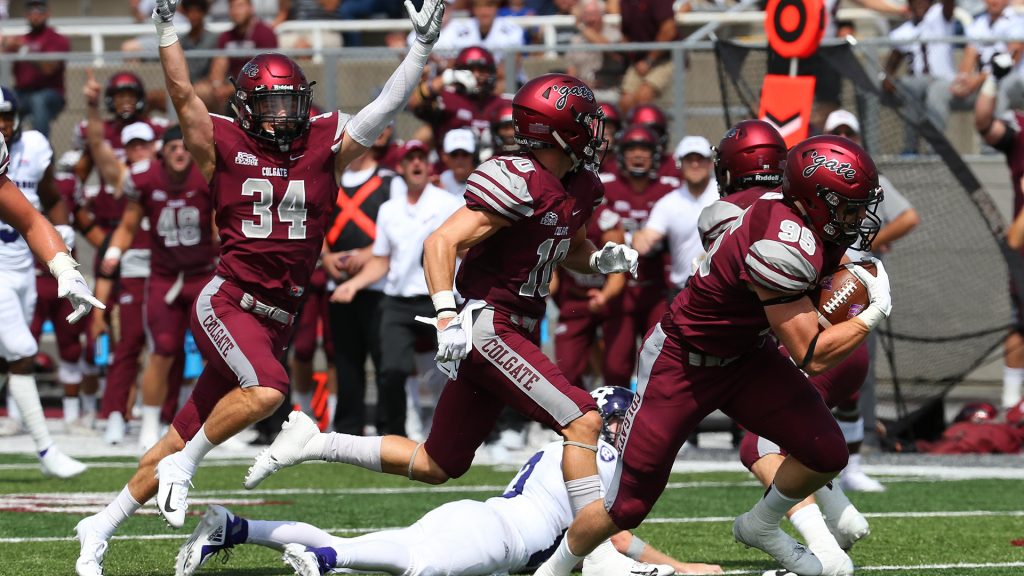 Colgate plays away from home for the first time in 2018 with a renewal of the series against No. 20 New Hampshire. The Raiders trail 6-2 in the all-time series but won 27-20 in Durham in the most recent meeting, a 2015 NCAA playoff game.

Last week, Colgate held on after a 24-0 halftime lead was whittled down to only a 7 point lead, but the Raiders were able to get the critical first downs necessary to win their opening game over Holy Cross 24-17 and net their first Patriot League win of 2018.

Fantasy Bonus Baby: RB James Holland should continue to be an enormous factor in the Colgate offense.  He had 34 yards rushing and added a TD reception of 24 yards last week.

The Wildcats will be hoping to rebound from last week’s crushing 35-7 loss at the hands of Rival Maine last week, returning to the friendly confines of Wildcat Stadium to take on Colgate.   Over the last two years New Hampshire is 10-2 at home.

The Wildcats will have to rebound from the loss of QB Trevor Knight, who endured a season-ending injury at Maine.

Key Player: The Wildcats will look to their defense, and guys like LB Quinlen Dean, to get their season back on track.  In one of the few bright spots for the Wildcats last week, Dean had 11 tackles and a sack.

Fantasy Bonus Baby: Can sophomore QB Christian Lupoli step in for the injured Knight and get New Hampshire back on track?  Against Maine he went 5-13 passing, but if the Wildcats are to make noise this year he’ll need to get things going better, and fast.

Fearless Prediction: Behind an inspired defensive effort – at home, where the Wildcats are a bit of a different team – New Hampshire should have enough to get back to .500 in an absolute must-win game for them if they hope to compete in the CAA this season.   New Hampshire 27, Colgate 10