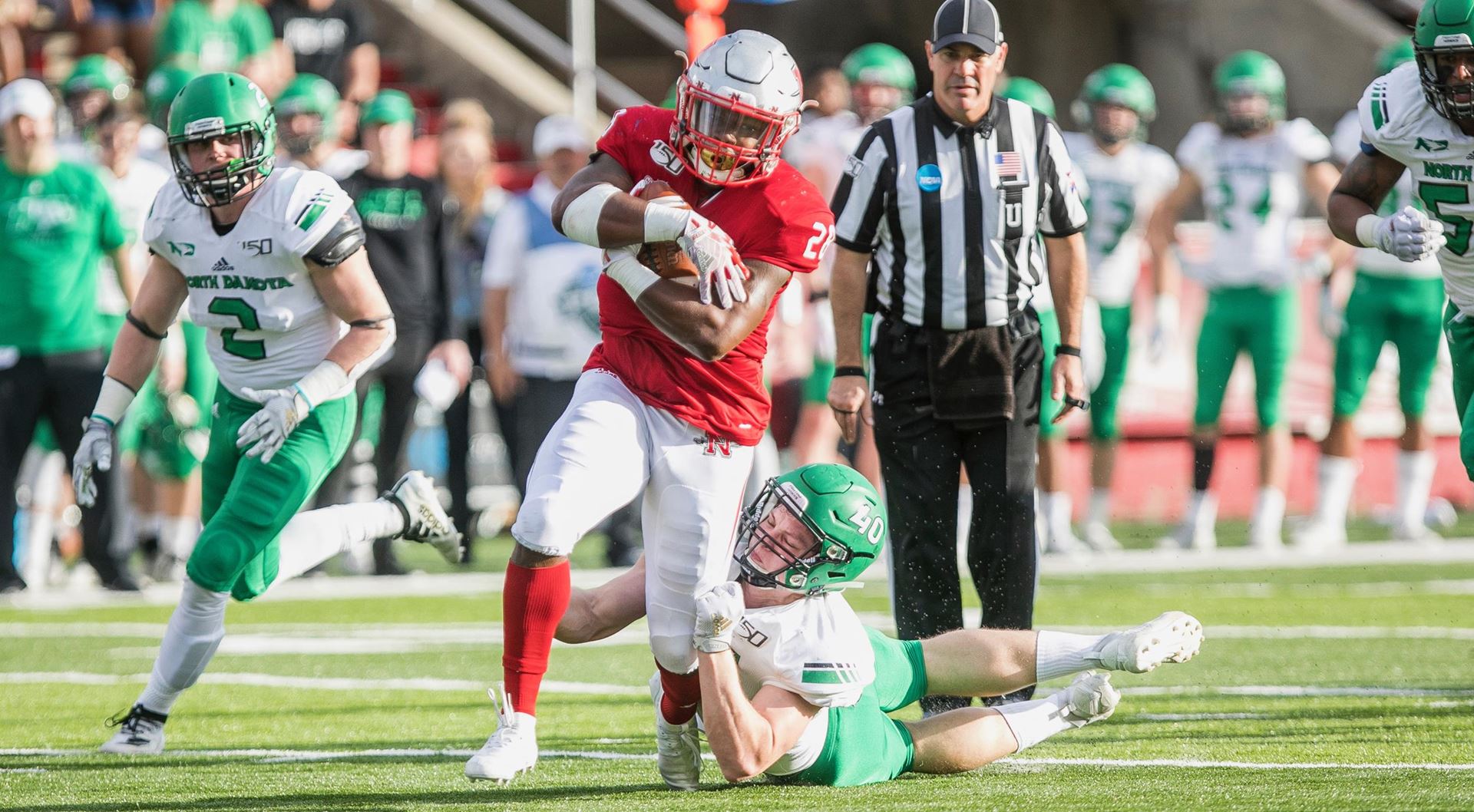 THIBODAUX, La. – Julien Gums and Dontrell Taylor combined for 267 yards on the ground and quarterback Chase Fourcade completed all but two of his 16 pass attempts as Nicholls State defeated North Dakota 24-6 on Saturday on Manning Field at John L. Guidry Stadium.

The win sends the Colonels (9-4) onto the second round of the FCS playoffs where they will face top-seeded North Dakota State (12-0) on Saturday at the Fargodome. The Bison, the two-time defending national champion is currently ranked No. 1 in the nation and are on a 33-game winning streak. That streak matches the FCS record established by NDSU back in 2014-16.

Gums, a sophomore, ran for 172 yards on just 16 carries in the contest. He was held out of the end zone for the first time in six games. But, he did put his name in the NSU record book.

Gums finished the game with 1,155 yards rushing this season. That breaks the previous record of 1,103 yards held by Tuskani Figaro (2013).

Taylor came up just short in reaching the 100-yard plateau for himself. He ended the day with 95 yards on 17 carries against the Fighting Hawks. His two-yard run with 2:28 remaining in the game put the finishing touches on the victory.

The game was a match of defensive wits through much of the first half. Nicholls opened the scoring on a 27-yard field goal from Gavin Lasseigne with 6:34 to go in the first quarter. That capped an 11-play drive that covered 60 yards for the Colonels.

Sully Laiche was credited with a strip-sack for the Colonels moments later and Fourcade capitalized by scoring on the very next play from one yard out. Lasseigne’s PAT kick gave NSU a 10-0 advantage with 2:12 to go before halftime.

North Dakota got its first points of the game on a 34-yard field goal from Brady Leach as time expired in the first half to pull the Fighting Hawks to within 10-3 at the intermission.

Leach added another field goal, this time from 42 yards away, in the third quarter to pull UND to within 10-6 with 6:50 remaining in the period. It would be as close as they would get the rest of the way.

Nicholls would strike quickly to add some distance between the two teams. Fourcade connected with Dai’Jean Dixon on a 45-yard pass play that allowed the Colonels to take a 17-6 lead with 4:22 remaining in the quarter.

Fourcade finished his day with 14 completions on 16 attempts for 165 yards. He also added 46 yards rushing on four carries as NSU enjoyed a huge advantage in rushing the ball. NSU finished the game with 50 carries for 316 yards on the ground, while the visitors were held to just 44 yards after carrying only 14 times on the afternoon.

Dixon, who missed six games, earlier this season with an injury, finished with eight catches for 122 yards in the game. It was his fourth straight 100-yard outing this season.

North Dakota was paced on offense by quarterback Nate Ketteringham. He completed 27 of 47 passes for 269 yards and was the top rusher on the day for the Hawks with seven carries for 20 yards. Travis Toivenon caught 10 passes for 121 yards to top UND in that department.