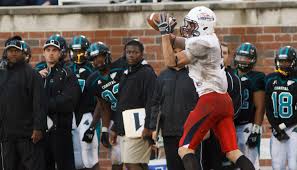 CONWAY, S.C. — Hurricane Sandy and the Chanticleers called the shots today, as Coastal Carolina (4-4, 2-1) knocked off Liberty (3-5, 2-1) 36-12. In a windy and rain-soaked rivalry contest, Coastal stays alive in the Big South Championship race. Liberty has now lost 5 games in a season for the first time since 2006.

Liberty controlled the clock in the first quarter, when a Josh Woodrum pass intended for Pat Kelly bounced off Kelly's hands and landed in Coastal's LaDarius Hawthorne hands. Hawthorne returned the interception 66 yards for a touchdown. On the ensuing PAT, Coastal QB Aramis Hillary took the snap and ran in for the 2 point conversion to give Coastal an 8-0 early lead.