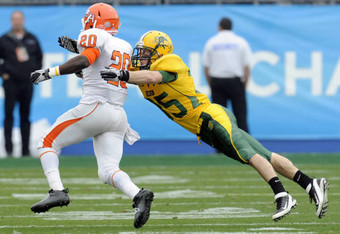 And in 2012, the Bison edged out the Bearkats for the top spot in the first College Sports Journal preseason Top-25 poll.

Advancing to the championship game for the first time last season, North Dakota State and Sam Houston State were picked as favorites to repeat as title-contest participants by a poll that included FCS experts from around the country.

Both teams return a bulk of their rosters from last season, when the two squads lost only two games combined and won the Missouri Valley Football Conference and Southland Conference titles respectively.

Appalachian State, one of the perennial favorites to contend for the FCS crown was ranked third, followed by its Southern Conference rival Georgia Southern at No. 5.

The Mountaineers have made the playoffs in seven consecutive years and won third straight national titles from 2005-2007.

Georgia Southern has advanced to the semifinals in each of the past two seasons under now-third-year coach Jeff Monken after experiencing a four-year drought from the playoffs between 2006-2009.

Georgia Southern, Appalachian State and Youngstown State are the only teams to win national crowns in back-to-back years, a feat North Dakota State is trying duplicate.

Montana State, which won its lone FCS crown in 1984, is ranked between Appalachian State and Georgia Southern at No. 4 in the CSJ poll after winning a share of the tough Big Sky Conference title in the past two years.

Towson, the defending Colonial Athletic Association champion, is rated sixth. After going from 1-10 in 2010 to 9-3 last season, the turnaround Tigers were the only team other than North Dakota State to receive first-place votes in the CSJ poll.

James Madison, with a 2004 national title under its belt, was selected seventh. The Dukes won a playoff game a year ago before being knocked off by North Dakota State in the second round.

Wofford was picked eighth to give the Southern Conference a third team in the top-10. The Terriers are coming off back-to-back playoff appearances.

Northern Iowa, an FCS finalist in 2005 and a quarterfinalist last season, was selected ninth. The Panthers have missed the playoffs just once since 2005.

Lehigh, with playoff wins over Northern Iowa and Towson in the past two seasons to go with a pair of Patriot League titles, completes the top-10.

Stony Brook, which won the Big South title last season to qualify for its first FCS playoff berth, comes in at No. 11. The Seawolves nearly upset then-unbeaten and top-seeded Sam Houston State on the road in the second round of the playoffs last year after beating Northeastern Conference champion Albany in the first round.

The 2010 national championship team, Eastern Washington, stumbled and failed to make the playoffs last season, but the Eagles are picked 12th in the preseason poll. EWU hopes to rebound after an injury-plagued 2011 campaign.

Old Dominion made the playoff in just its third year of football in 2011 and the Monarchs start the 2012 campaign at No. 13. This will be ODU's final season in FCS before joining Conference USA and beginning the transition to the Football Bowl Subdivision.

Delaware, which captured the 2003 national championship and reached the finals again in 2007 and 2010, is ranked 14th after narrowly missing the playoffs in 2011.

Youngstown State is trying to rebuild after reaching the title game six times and winning four championships (1991, 1993, 1994, 1997) in the 1990s. The Penguins are looking for their best finish since making it to the semifinals in 2006 and are ranked 15th.

Montana has reached the playoffs every year but once since 1993 and advanced to seven title games and won two titles (1995, 2001) since then. But the Grizzlies are ranked just 16th after encountering a tumultuous off-season that saw the team lose its head coach, athletic director and starting quarterback due to off-field issues.

Maine came up just a game short of the CAA title in 2011 and reached the quarterfinals of the playoffs. With nearly everyone back from that squads, minus two All-American safeties, an offensive lineman and its top two quarterbacks, the Black Bears are rated 17th to start this season.

Indiana State has been making tremendous strides in the past couple of years under Trent Miles, who is in his fifth season at his alma mater. Once the losingist program in FCS, the Sycamores are ranked 18th in a season where they should compete for a playoff berth.

New Hampshire, which has the current longest string of consecutive playoff berths with eight since 2004, is ranked 19th after losing quarterback Kevin Decker and defensive end Brian McNally to graduation.

Illinois State, which narrowly missed securing the final spot in the 20-team playoffs last year, comes in at No. 21.

Stephen F, Austin, a finalist for the national title before losing to Georgia Southern in 1989, hopes to get back on track after winning back-to-back Southland Conference titles in 2009-10, but missing the postseason with a losing record last year. The Lumberjacks are ranked 22nd.

Southern Utah has the top returning quarterback in FCS in Brad Sorenson and moves to a new league, going from the now-defunct Big West Conference to the Big Sky. The Thunderbirds are rated 23rd in the preseason.

Villanova is looking to rebound from a 2-9 campaign after its previous graduating class compiled the best four-year run in school history. The Wildcats, who won the 2009 national crown and reached the semifinals in 2010, are ranked 24th with the return of several key players.

Eastern Kentucky, which reached four consecutive national title games from 1979-82 and won championships in 1979 and 1982, is looking to regain its luster after winning a share of the Ohio Valley Conference crown and reaching the playoffs last season. The Colonels complete the poll at No. 25.

Nine of the 13 conferences had teams ranked in the top-25, with the CAA leading with seven teams, the MVFC next with five and the Big Sky third with four. The Ivy League, Northeast Conference, Pioneer Football League and Southwestern Athletic Conference did not have squads crack the top-25, but each of those leagues had teams receive votes.

Though this is the first College Sports Journal preseason FCS Top-25 poll, it is not the first time that the people behind the team have chosen polls All-American squads at the FCS level.

The team was selected by a panel of FCS experts that include the co-owners of College Sports Journal, David Coulson and Chuck Burton.

Coulson is a 35-year veteran of covering college football at every level from Division I to the junior college ranks, including 20 years as the leading written voice of FCS. He authored an award-winning, coffee-table book on Appalachian State's run to the 2005 national championship, entitled "Magic on the Mountain."

A 1980 graduate of Fresno State, Coulson also spent two years as sportswriter for the Los Angeles Times, three seasons running the FCS awards program as the executive director of The Sports Network and was one of the pioneers of College Sporting News in 2001.

Burton cut his teeth in FCS as a student at Lehigh. After graduating, he began the popular blog, Lehigh Sports Nation, covering the Mountain Hawks and the Patriot League in depth.

Others receiving votes (in order of points):