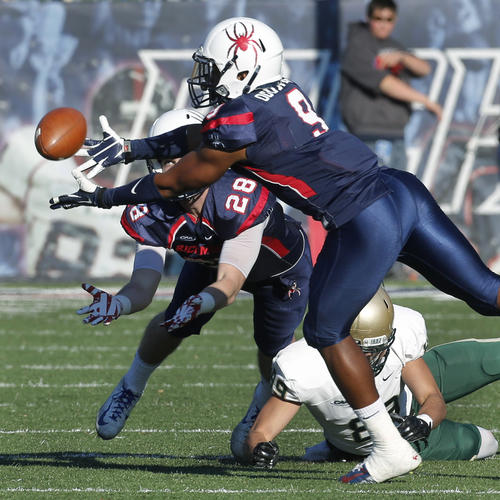 RICHMOND, VA. — The University of Richmond football team was dominant on Saturday afternoon, burying Capital Cup rival William & Mary (9-4, 6-2), 48-13, at Robins Stadium to claim a second round win in the NCAA Division I Football Championships.

UR earned the right to advance to the quarterfinals for the first time since 2009, when it won its only football national championship

The Spiders (9-3) will square off with No. 2 seed Illinois State Friday in Normal, Illinois at 7:30 p.m. ET, with the game televised on ESPN3. Ticket information will be released when it becomes available.

All-Colonial Athletic Association running back Jacobi Green collected 141 yards in the game and three rushing scores on 25 carries to pace the offense while QB Kyle Lauletta threw for 146 yards and rushed for two scores.

Lauletta completed 12 passes on a season-low 17 attempts and spread the ball around. Brian Brown led the team with four catches for 41 yards with James Pavik picking up three catches for 44 yards.


With his effort on Saturday, Green now has 1,426 yards for the season, which places him fourth all-time in the single-season record books. His 18 touchdowns rank third-all time behind Josh Vaughan and Tim Hightower who each collected 20 rushing scores in separate seasons.

Richmond DB David Jones was spectacular again opposite William & Mary (9-4). He began the afternoon with a 50-yard punt return that set up a score for the Spiders. It was the longest return for the Spiders this season and the longest since Justin Rogers had a 54-yard return in 2010.

Jones also broke two records with one play in the second quarter. The junior picked off Steve Cluley in the end zone to set a new single-season interception record (nine) and took it 100 yards to the house to register the longest interception return in Richmond football history.

The previous long was 95-yards by Tom Theodose in 1955. Jones is just the fourth player in FCS Playoff history to have a 100-yard interception return.

Brown now has 1,221 receiving yards this year, which are a new Richmond single-season record. The junior is already the first Spider wide out to go over 1,000 yards twice in a career and his 2,489 yards for his career already rank sixth all-time in the Richmond record books.

Just like the first tilt with the Tribe, Richmond won the toss and deferred to the second half.

The defense held William & Mary to a three-and-out and the offense took the field for the first time deep in Tribe territory after Jones’ huge punt return. Green ran for a pair then Pavik caught a 16-yard pass out of the backfield.

Green then ran for four more, Brown caught a pass for five and Green finished off the drive with a 3-yard touchdown run. With All-Conference PK Peter Yoder out again, Griffin Trau came on and converted the extra-point to make it an early 7-0 Spider lead.

William & Mary answered with a field goal but only after being stopped on second and third down from the Richmond one-yard line. Green started the next Richmond drive with a 49-yard rush, all the way down to the Tribe 28-yard line.

Seth Fisher entered the game for his first action since Oct. 17 at Rhode Island where he suffered an ankle injury and carried twice during the scoring drive for a total of seven yards. Green finished it off with a one-yard run at the goal line for his second score of the afternoon.

William & Mary closed the quarter in possession of the football and seemed poised to add points to its total when David Jones intercepted Cluley for the 100-yard pick-six that made it a 21-3 spread with 9:38 to play in the half.

The Tribe later scored a touchdown set up by a Lauletta interception but the Spiders responded late in the quarter with an eight play, 75-yard drive capped off by a 10-yard Kyle Lauletta tuck and run at the end of which the junior dove forward and lost the football after crossing the plane. The review awarded a touchdown and Richmond went to the locker room with a 28-10 lead.

After Richmond punted once and William & Mary added a field goal, Richmond started to take complete control of this one. Green ran hard and Lauletta completed passes all the way down to the William & Mary three-yard line where the quarterback put his head down and plowed into the end zone for a second time to push the Spiders ahead 35-13.

At the end of the third quarter the Spiders embarked on a touchdown drive that finished at the beginning of the fourth quarter with a Green, one-yard run, his third score of the day.

Richmond added one more score during the later stages of the fourth quarter with the game already in hand to complete the 48-13 effort.

The 48 points are the most the Spiders have ever scored in an FCS Playoff game and the second most in postseason history.

Despite the season-ending loss, W&M’s successful 2015 campaign included nine victories and a share of the Colonial Athletic Association title.

Richmond outgained the Tribe, 448-214, and piled up 302 yards on the ground. UR tailback Jacobi Green provided much of that production, as he rushed for 141 yards on 25 carries with three touchdowns.

Junior running back Kendell Anderson scored the Tribe’s lone touchdown and rushed for 63 yards on 14 carries. In doing so, he joined former W&M All-American Jonathan Grimes as one of just two players in school history to rush for more than 1,400 yards in a season (1,418).