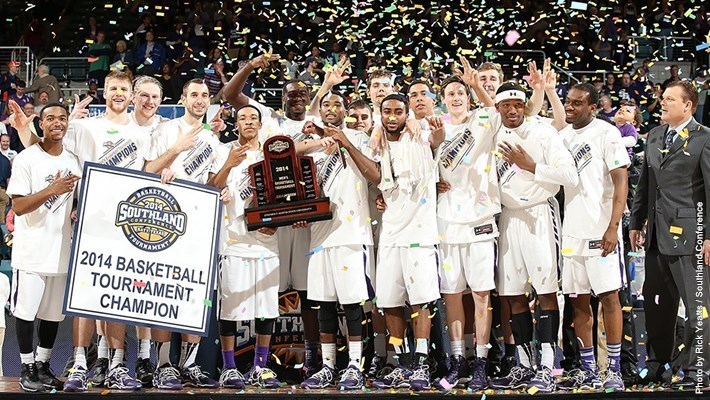 With the Southland Conference’s automatic bid to the NCAA basketball tournament on the line in 2014, that championship became a battle of Texas of a different sort.

Their two namesake universities battled for the Southland Conference championship, in front of a boisterous and rowdy crowd, and the big prize that comes with it, the elusive bid to the NCAA tournament.

This time Sam Houston did not win but Stephen F. Austin’s namesake university won the championship 68-49.

A three pointer by Sam Houston’s Will Bond gave the Bearkats their largest lead of the night at 18-12.

Then the Jacks tightened up the pressure of their man defense and loosened up the Kats with their screen heavy motion offense to take a 33-28 lead at the half.

A three pointer by Kaheem Ransom pulled the Kats to within 35-32, but then it was all Lumberjacks down the stretch.

A layup by Conner Brooks at the 7:07 mark culminated a 21-5 Jacks run that basically sealed the game.

A free throw by Desmond Haymon at the 1:32 mark gave the Jacks their biggest lead of the game at 68-47.

First year coach Brad Underwood then emptied the bench and the Lumberjack faithful were in celebration mode and ready to dance.

“This feels amazing,” said tournament MVP Thomas Walkup. “All of the hard work paid off. We showed up everyday and would just grind. It feels good to leave this place happy.”

The Jacks locked down SHSU on defense in the second half as they held the Kats to only six field goals.

“We were better on offense but the reason we were better in the second half was because of our defense.” stated Nikola Gajic.

Thomas Walkup paced the Jacks with 19 points while Deshaunt Walker tossed in 12 and conference player of the year Jacob Parker finished with 10.

Parker also grabbed a game high 12 rebounds as the Jacks out rebounded the Kats 35-23, with 11 of those rebounds being offensive rebounds.

Sam Houston failed to land a double digit scorer. Terrance Motley came off the bench to lead the Bearkats with 9 points. James Thomas and Will Bond both added 8.

Stephen F. Austin improves to 31-2 and currently rides a 28 game win streak, which is the second longest in NCAA Division I just behind Wichita State’s 34 game win streak.

While Sam Houston falls to 23-10. The Lumberjacks will find out their NCAA tournament pairing on Sunday at 6PM on the CBS NCAA selection show. The Bearkats now have to wait for their post season invitation which could be the NIT or more likely the CBI or CIT tournaments.