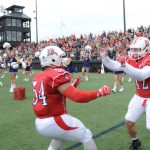 If you followed the NEC last season, you were treated to the exploits of some fantastic players that will be ending up in the camps of NFL teams this summer. Guys like St. Francis (PA)’s Lorenzo Jerome and Duquesne’s Christian Kuntz were well-known around FCS Nation. But championships are not only won with those guys […]