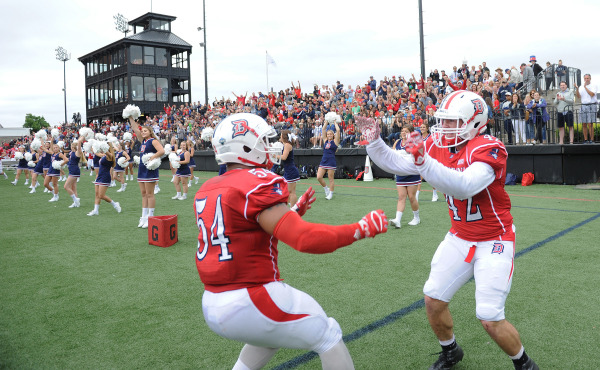 If you followed the NEC last season, you were treated to the exploits of some fantastic players that will be ending up in the camps of NFL teams this summer.

But championships are not only won with those guys – they win with the guys who sometimes come out of nowhere to become breakout players.

In the 2017 season, every team has a player who fits that description, and below we talk a potential breakout player from each NEC team.

On last year’s All NEC team, the conference selected as their 1st team return specialist St. Francis (PA) defensive back Lorenzo Jerome. What they neglected to mention in the press release was that the 2nd team return specialist, Sewall, not only outgained Jerome but also scored more touchdowns.

The Portsmouth, Rhode Island native only started five games at wide receiver, but once anointed as a starter he thrived, leading the Bulldogs in receiving yardage (522 yards) and scoring (7 receiving touchdowns, one rushing touchdown, one return touchdowns and two 2 point conversions). In 2017, he’s poised for way more production.

A two-year starter at safety, this Linden, New jersey native started every game for the Blue Devils and led the team in interceptions with three (with two of them returned for touchdowns). Teammate Randall LaGuerre gets a heap of recognition for being the tackling linchpin of CCSU’s defense, but Hinton shouldn’t be overlooked in their secondary.

Christian Kuntz got most of the postseason accolades last year for the Dukes defense, but it would be foolhardy to sidestep the accomplishments of Stone, who gamely moved from outside linebacker to inside linebacker in Kuntz’ senior season and as a result notched 73 tackles and 8 tackles for loss. If Stone has the breakout year as a senior some are expecting, the Dukes defense will continue to be a strength.

A 6’1, 230 lb linebacker out of St. Petersburg, Florida, Uhatafe notched 84 tackles and 3 1/2 sacks for the Colonials’ young team, while also forcing three fumbles and cementing his place in the interior of Robert Morris’ defense. If the Colonials are going to return to contention for the NEC title this season, it will probably be due to the emergence of Uhatafe as a leader on their defense. The 5’9, 185 lb spark plug for the Pioneers is returning for his final year of eligibility, and Sacred Heart fans are very glad he is. The Bellport, New York senior led the Pioneers in rushing with 737 yards and scored 7 touchdowns, and will undoubtedly be looked at to carry the offense in the early going in the wake of the graduation of quarterback R. J. Noel. Can he bust out and have a 1st team all-NEC type season?

Could Solano be an impact player that steps into the place of Lorenzo Jerome in returning kicks? The transfer for Fordham struggled through a couple injury-plagued seasons for the Rams but transferred for his final season to the Red Flash, where he could emerge as a big-play wide receiver and return man for St. Francis. In 2013 Solano returned 43 kickoffs for 909 yards. Could the Coral Springs, Florida native be able to repeat that production on the Red Flash?

The Rochester, New York native had spurts of great play with the Seahawks last season, eclipsing the 100 yard mark three times and ending up with 707 yards rushing and 7 touchdowns after emerging from a terrific spring. While much of Wagner’s preseason is focused on quarterback Alex Thompson and the passing game, it could be Knight’s performance that determines whether the Seahawks will be competing for a NEC title or not.