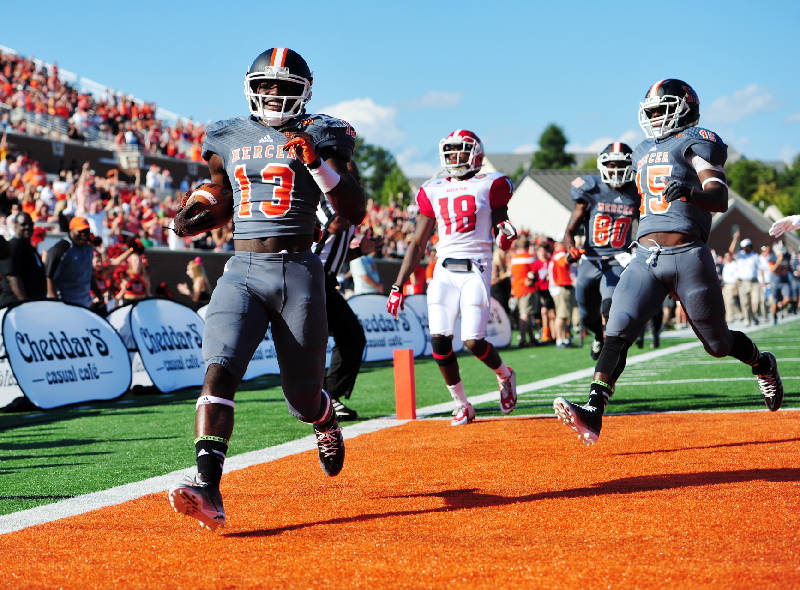 Some of the breakout candidates in the Southern Conference are “sleepers”, players with limited playing time in the past who could turn into stars this season. Others have been solid contributors, but are now ready to make an even bigger impact. Regardless, all nine of the players listed below are capable of being all-league performers, and all of them can make plays that win games.

Wofford has had a bit of a revolving door at the quarterback position in recent years (injuries have been a major factor), so projecting a Terrier QB to be a breakout player can be tricky, especially when he didn’t start a game last year.

That said, it is hard to imagine Joe Newman won’t see plenty of playing time this season.

The 5’11”, 177 lb. sophomore from Riverdale, Georgia only appeared in five games for Wofford last season, but he was a difference-maker late in the season. Newman’s 75-yard TD burst to open the second half against Youngstown State in the FCS playoffs was a good example of his big-play potential. Newman averaged 8.6 yards per carry in the Terriers’ option attack.

Furman’s incoming defensive coordinator, Chad Skaggs, employs a 3-4 defense. Luckily for Skaggs, he inherited an excellent noseguard. Jaylan Reid is a 5’11”, 274 lb. redshirt junior from Marietta, Georgia, who possesses the strength/quickness combination needed at that position.

There are a lot of questions for the Paladins this season under a new coaching staff, but Reid could provide some answers. He had six tackles (and a forced fumble) against The Citadel last season, and picked up four tackles and a sack versus Michigan State. Reid is also the reigning SoCon champion in the shot put.

He isn’t big (5’8″, 167 lbs.), but the redshirt sophomore from Roanoke, Virginia, is definitely a threat in the return game. Dermott had two receptions in VMI’s season opener at Akron, but didn’t make another catch for the rest of the season. His status as a potential breakout performer rests in part on becoming more of a factor as a receiver.

As a redshirt freshman in 2016, Jason Maduafokwa only started one game, the season finale against Samford.

Despite that, the 6’3″, 259 lb. native of Seymour, Tennessee led the Buccaneers in sacks (with four).
Maduafokwa’s sack-happy ways led to him making the SoCon All-Freshman team. With more playing time, and perhaps with the benefit of more help (as ETSU gradually increases its depth), Maduafokwa could put up even bigger numbers in 2017.

Most of the players on this list have never made an all-conference team. That is by design, as I define a “potential breakout player” as someone yet to become a star.

Chandler Curtis is an exception. As a freshman in 2014, Curtis (5’11”, 202 lbs.) was the first-team all-SoCon return specialist, after a spectacular campaign that included three punt return touchdowns and another TD on a kickoff return. He also caught 5 touchdown passes and threw in a rushing TD for good measure.

Then came the injuries. Over the past two seasons, the resident of Calhoun, Georgia has only played in eleven games.

If Curtis can rebound from two trying campaigns and play like he did as a freshman, he’ll be a breakout performer all over again. That may be a big “if”, but Curtis is talented enough to bear watching, especially if you are a fan of, well, the Bears. Redshirt freshman Brandon Rainey has yet to appear in a game for The Citadel, but I’m listing him as a breakout candidate anyway. Why? Because he may start the season as the Bulldogs’ B-back, a featured role in The Citadel’s triple option offense.

The 6’0″, 185 lb. Rainey was moved to B-back in the spring due to a series of injuries to other players. As a high school quarterback, he led his team to the 5A state title in Georgia and was named Cobb County player of the year. Rainey played wide receiver as a high school junior, suggesting that he has the athleticism and versatility to make the adjustment to another position.

As a freshman last season, Connell Young (6’0″, 200 lbs.) was a running back who also returned kickoffs and a couple of punt returns. He rushed for 155 yards and 4 TDs (including two against South Carolina), not bad for someone seeing limited action behind Detrez Newsome.

In the spring, the Greensboro, North Carolina native was switched to wide receiver, even though he only caught one pass in 2016. Head coach Mark Speir probably wants to get a promising offensive performer more playing time. Don’t be surprised if Young’s move to wideout pays dividends for the Catamounts.

After spending the 2015 season at Army’s prep school (USMAPS), Nash played all 12 games for Samford last year, starting once. He was named to the league’s All-Freshman team after recording three tackles for loss and one sack.

Nash is from Huntersville, North Carolina, and had at least two FBS offers coming out of high school. At 6’3″, 245 lbs., he could be the starter at the “stud” position on the Samford D-line in 2017, and might be ready to make a major statement in 2016.

This is a year of transition for the Mocs. Chattanooga has a new head coach and a lot of players to replace on offense, including two wide receivers (Xavier Borishade and C. J. Board) who combined for 93 receptions and 13 touchdowns. The two accounted for over half of Chattanooga’s reception yardage in 2016.

UTC has several candidates to replace that production, and one of them is Bingo Morton (6’2″, 215 lbs.). The redshirt junior from Atlanta only caught eight passes last season, but was a highly touted prospect coming out of high school (247 sports gave him a three-star rating).
It’s possible Morton just needs an opportunity to shine. UTC fans certainly hope so.

E.M. Winslow contributed this piece for the College Sports Journal.