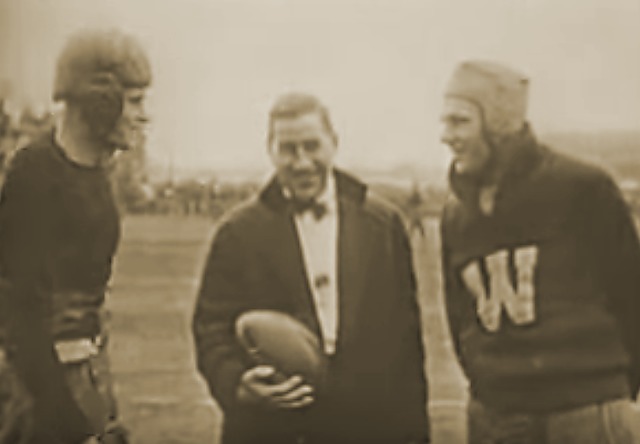 ATLANTA, GA. — As part of an ongoing series throughout the fall, The National Football Foundation & College Hall of Fame posts This Week in College Football History, which takes a look back at some of college football’s landmark moments over the last 147 years.

College Football Hall of Famer and Brown halfback Fritz Pollard became the first African-American to play in the Rose Bowl, gaining just 47 yards in the rain-soaked game. After a scoreless first half, Washington State got on the board on a three-yard run by Ralph Boone, followed by an Arthur Durham extra point. The Cougars extended their lead to 14-0 on a short run by Carl Dietz in the fourth quarter. Dietz was named the MVP of the game. Washington State, coached by Hall of Famer William “Lone Star” Dietz, finished with a 7-0 record, the last perfect season in program history. Brown, under Hall of Fame coach Edward Robinson, ended the season with a 5-4-1 record. Wallace Wade, who would have a Hall of Fame coaching career at Alabama and Duke, played on the line for Brown.

College Football Hall of Fame coach Jim Tressel and Ohio State handed Miami its first loss in 34 games in a double-overtime BCS Championship thriller in 2003. The Hurricanes struck first on a Ken Dorsey touchdown pass to Roscoe Parrish, answered by two rushing touchdowns by Buckeyes’ quarterback and 2003 William V. Campbell Trophy winner Craig Krenzel and tailback Maurice Clarett. Miami tailback Willis McGahee scored on a nine-yard run to cut the lead to 17-14, and Parrish dashed 50 yards on a punt return to set up Todd Sievers’ tying field goal on the final play of regulation. Hurricane tight end Kellen Winslow hauled in a short touchdown pass from Dorsey on the first overtime possession. Facing a fourth-and-goal situation at the Miami five-yard line, Ohio State caught a break on a controversial pass interference call that led to a quarterback sneak by Krenzel to level the score. Clarett put the Buckeyes ahead 31-24 on a short run, and the Ohio State defense batted down a fourth-down pass by Dorsey to claim the 2002 National Championship. The Buckeyes claimed the school’s seventh national championship and first since 2002 with a perfect 14-0 record. Miami finished No. 2 in the nation with a 12-1 record.

Tulane hosted College Football Hall of Fame coach Pop Warner’s Temple squad in the first ever Sugar Bowl in the first stadium built solely for football, Tulane Stadium. The Green Wave lost two first-half fumbles within their own red zone that led to two Temple touchdowns. Fullback Dave Smukler threw a seven yard pass to Danny Testa for the first score. Following the second score, Tulane’s Johnny McDaniel received the ensuing kickoff before tossing the ball to Hall of Famer Monk Simons, who dashed up the sideline for a touchdown. Near the end of the third quarter, halfback Howard Bryan produced a large gain, setting up a scoring run by Dick Hardy on the next play. Tulane completed the comeback victory after Temple defender Horace Mowery tipped a pass into the direction of Hardy, who took it in to the end zone. Temple finished with a 7-1-2 record, and Tulane finished 10-1, its winningest season until 1998.

Only twice in bowl history had two schools been selected to play in consecutive-year matchups, and College Football Hall of Fame head coach Ara Parseghian’s Notre Dame squad sought revenge after losing to Hall of Fame coach Darrell Royal and Texas in the 1970 Cotton Bowl. The Fighting Irish stuffed nine men on the line of scrimmage to hinder the Wishbone offense, resulting in 42 yards rushing and three fumbles by Longhorn fullback Steve Worster. Texas took an early 3-0 lead, but then Hall of Fame quarterback Joe Theismann took control of the game, connecting with 2015 Hall of Fame inductee Thom Gatewood for a 26-yard touchdown and plunging into the end zone on his own for a 14-3 lead. Notre Dame and Texas finished No.2-3 in the final AP Poll, respectively, with 10-1 records. The Longhorns also featured Hall of Fame offensive lineman Jerry Sisemore.

Despite the final outcome, the 1993 Fiesta Bowl started out as a defensive battle as College Football Hall of Fame coach Bill McCartney’s Colorado squad led 7-6 more than halfway through the third quarter before the scoreboard erupted with 29 points in a seven-minute span. Syracuse quarterback Marvin Graves scampered 28 yards to give the Orange a 19-10 lead. Colorado answered with a 16-yard touchdown strike from Kordell Stewart to Charles Johnson to cut the lead to 19-16. On the final play of the third quarter, Syracuse running back Kirby Dar Dar took a handoff on the ensuing kickoff and raced 99 yards for a 26-16 lead. Buffs tailback Lamont Warren rumbled behind the blocking of 1992 William V. Campbell Trophy winner Jim Hansen to pull Colorado within four with 4:28 remaining, but it was not enough as the Orange held on for the win. Syracuse finished with a 10-2 record and a No. 6 ranking. Colorado fell to 9-2-1 and No. 13 in the final AP Poll.

East Carolina’s Cinderella season continued with its fifth fourth-quarter comeback to down N.C. State in the 1992 Peach Bowl. Trailing 17-14 at halftime, the Wolfpack notched 20 unanswered points via quarterback Terry Jordan’s second touchdown pass, a scoring plunge by running back Greg Manior and a 52-yard option pass from fullback Ledel George to Charles Davenport. East Carolina finally responded when Pirate quarterback Jeff Blake scored a touchdown on the ground and another through the air. Down 34-31, East Carolina got the ball back with 2:37 to go, and Blake connected on four-of-five passes for 29 yards, including the game-winner to Luke Fisher with 1:32 remaining. The Pirates’ defense held strong in the final seconds of the game. With a program-best 11-1 record, East Carolina slid up to No. 9 in the final poll. N.C. State remained in the final poll at No. 24 with a 9-3 record.

Western Kentucky faced a tough Tangerine Bowl opponent in Coast Guard, who entered the game as the first undefeated team in academy history while allowing a program-low 42 points all season. The Bears’ defense, however, proved no match for the Hilltoppers and the Burt brothers, Jim and John. The two combined for 76 yards rushing to help set up both of quarterback Sharon Miller’s touchdown passes. Western Kentucky earned their third-straight shutout victory, ending the season with a 10-0-1 record. Coached by College Football Hall of Fame player Otto Graham, Coast Guard fell to 8-1-0.

South Carolina went the distance on the first possession, scoring on a 20-yard pass from Garry Harper to Zion McKinney. Missouri, however, took control of the game with a 17-point second-quarter scoring spree. After a Missouri field goal from Ron Verrilli, the Gamecocks fumbled the ensuing kickoff, setting up a 28-yard touchdown strike from Phil Bradley to David Newman. Bradley scored a second time on the ground to solidify a 17-6 halftime lead. Harper answered in the third quarter with an 11-yard scramble and a two-point conversion pass to McKinney to cut the lead to three. Led by linebacker Eric Berg, the Tigers’ defense shut out South Carolina for the rest of the game, despite College Football Hall of Fame tailback George Rogers racking up 133 yards for the Gamecocks. South Carolina fell to 8-4, and Missouri finished with a 7-5 mark.

Marking the 50th anniversary of the game, the Gator Bowl moved to “The Swamp” as the traditional Jacksonville site was being renovated for the Jacksonville Jaguars. Tennessee, winners of its last five, and Virginia Tech, losers of three of their last four, combined for a bowl record point total. Running back James Stewart became the Volunteers’ new career rushing leader and accounted for four touchdowns in the win. Future William V. Campbell Trophy recipient Peyton Manning threw for 189 yards and a touchdown, not long after being named the SEC’s Freshman of the Year. Fellow freshman signal-caller Brandon Stewart led two more scoring drives to build a 35-7 halftime lead. Coached by College Football Hall of Famer Phillip Fulmer, Tennessee jumped into the final AP Poll at No. 22 with an 8-4 record. The Hokies dropped out of the poll with an 8-4 record as well.

College Football Hall of Fame coach and NFF Board Member Grant Teaff closed out his 21-year career with an upset victory over Arizona in the 1992 Sun Bowl. The Wildcats established an early 10-0 lead on a Steve McLaughlin field goal and a seven-yard touchdown run by quarterback George Malauulu. Arizona’s defense, led by Hall of Famers Rob Waldrop and Tedy Bruschi, failed to stop Baylor on two big plays by wide receiver Melvin Bonner, who would claim game MVP honors. Bonner outgained the rest of the team 130-119 on touchdown receptions of 61 and 69 yards in the second and third quarters, respectively. Trailing 14-10, Malauulu was stuffed at the goal line on a fourth-and-goal situation. Two fourth-quarter field goals for the Bears sealed the win and a 7-5 record. Arizona wrapped up the season with a 6-5-1 record.

Considered a precursor to the college football bowl era, Cincinnati was challenged by the Southern Athletic Club following the 1897 season in a postseason game in New Orleans. Traveling with just 14 players, the Bearcats became the first school in Ohio to travel south for a postseason game. Accounts of the game have Cincinnati beating the Southern Athletic Club 16-0. The Bearcats finished with a 9-1-1 record, with the only loss coming at the hands of Carlisle (Pa.).

The Big Ten became losers of nine of the last 10 Rose Bowls as College Football Hall of Fame coach Terry Donahue and UCLA thumped Illinois in a rematch of the 1947 “Granddaddy of Them All,” which was the first official pairing of Big Ten and Pac-10 teams. The Bruins, sporting the worst record of any Rose Bowl participant, opened the scoring after a fumble on a blocked field goal return gave UCLA the ball on the Illini 14-yard line. The Bruins scored four plays later on a short pass form Rick Neuheisel to Paul Bergmann. Neuheisel tossed three more touchdown passes to tie the bowl record and give UCLA a 28-3 lead at halftime. The Bruins also racked up 213 rushing yards on the Big Ten’s best defense. UCLA’s defense didn’t allow a single rushing yard and forced six turnovers. The Bruins finished with an 8-4-1 record and a No. 17 ranking. Illinois, featuring Hall of Fame wide receiver David Williams, fell to No. 10 with a 10-2 record.