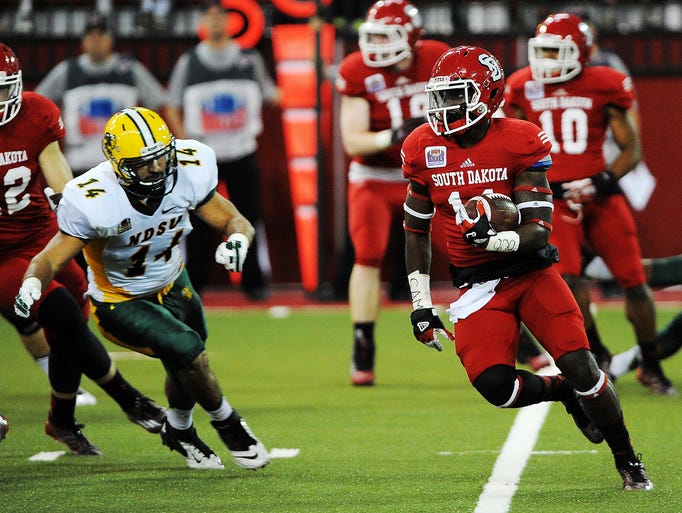 Editor’s Note: This story is courtesy of goyotes.com

The win ended the Bison’s 26-game home winning streak in MVFC play and ended the Coyotes’ 14-game conference skid. It was South Dakota’s first win inside the Fargodome in nine tries and the team’s first win in Fargo since 1978.

The Coyotes (3-3, 1-2 MVFC) scored 10 points in the game’s final five minutes and held the Bison (4-2, 2-1) scoreless in the second half, yielding 56 yards on the Bison’s five drives. South Dakota’s defense forced five 3-and-outs on 11 possessions for the game as the Coyotes outgained the Bison 395-320. NDSU came in averaging 33 points and 450 yards per game.

“This wasn’t a lucky win for us,” said South Dakota Head Coach Joe Glenn. “They didn’t fumble the ball to us. They didn’t throw interceptions. They didn’t get hurt by the officiating. They just got outplayed by a tough, gritty bunch that was bound and determined to win this game. They fought and scrapped to the final kick and came out winners and I couldn’t be more proud of these guys.”

South Dakota fullback Drew Potter hauled in an eight-yard touchdown pass from Ryan Saeger to cap a 15-play, 72-yard drive that tied the game at 21-21 with 4:47 remaining. It was the third collegiate touchdown reception for Potter and his only catch of the day.

The Bison ran twice for five yards, threw an incomplete pass on third down and punted back to the ‘Yotes with 3:20 remaining. The winning drive started on the South Dakota 29.

“The thing the coaches stressed was get the game into the fourth quarter and let’s see what happens, and that’s exactly what we did,” said Saeger. “The defense shut them out in the second half. Going into the fourth quarter we were down by a touchdown, they missed a field goal, and we just took advantage of a couple stops and did what we needed to do and then Bergner iced it for us.”

Saeger converted two first downs with his legs on the winning drive and Trevor Bouma added a 14-yard carry that got South Dakota down to the 27. Michael Fredrick ran to the Bison 16 on a first-down run and the Coyotes let the clock tick down to three seconds before calling timeout. The winning drive was nine plays, 55 yards.

“Our goal was to come here and play our best in all three phases of the game,” said Glenn. “The last couple weeks we’ve missed one part or the other.

“We showed that we could give them a battle. We knew that and played pretty darn good. We had to. We played a very good football team.”

Saeger completed 12-of-20 passes for 202 yards, three yards shy of his career high. He threw an eight-yard touchdown pass to Brandt Van Roekel with 10:38 left in the second quarter that cut North Dakota State’s lead to 14-7. He snuck in from one-yard out less than five minutes later to tie the game at 14-14. Saeger ran 16 times for 92 yards.

Saeger faked a quarterback draw and hit Bouma for a 73-yard completion to the NDSU 8 and Bouma carried to the one before Saeger’s sneak. Bouma caught two passes for 80 yards and ran 20 times for a game-high 94 yards.

North Dakota State quarterback Carson Wentz completed 16 of 28 passes for 195 yards. He threw a 37-yard touchdown pass to Darrius Shepherd to put the Bison in front 14-0 with 2:30 left in the first quarter. He led NDSU on an 11-play, 72-yard touchdown drive just before halftime. He hit Andrew Bonnet with a 7-yard touchdown to give the Bison a 21-14 halftime lead.

The Bison forced two turnovers, but netted two yards on the two ensuing drives. Both teams missed field goals near the start of the fourth quarter. Bergner missed a 47-yard attempt that would have cut the Bison lead to 21-17. Cam Pedersen’s first miss of the season followed, a 45-yard miss that would have made it 24-14 with 12 minutes left.

It was the second loss in the final seconds this season for four-time defending national champion North Dakota State, which was ranked No. 1 in the AnyGivenSaturday FCS Top-25 Poll. The Bison lost to Montana on the road to open the year.

NDSU has dropped two games in a season for the first time since 2010, its last non-national-championship campaign.

The Coyotes return to Vermillion and will host Missouri State (1-5, 0-3) next Saturday at 2 p.m. inside the DakotaDome.