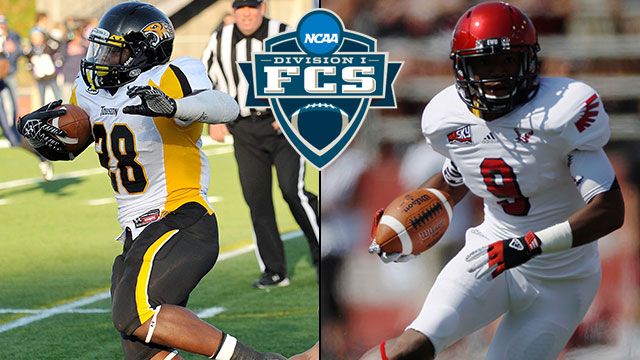 CHENEY, WA. — Towson coach Rob Ambrose watched his team work out Friday afternoon on the frozen, snow-covered surface at Eastern Washington’s Roos Field through the eyes of a child.

“I’m ready to play right now,” said Ambrose, with snow caking his Towson sweatsuit and continuing to whirl around him. “Who wouldn’t want to play in this?”

A couple of the children of Ambrose’s staff members fired a football nearby, bringing back memories for Ambrose of his days making trips to games with his father, a legendary Maryland prep coach.

“If we played in this stuff, we’d probably rush for 500 yards,” one member of the travel party said as the Tigers loaded onto busses after the workout.

But the snow storm at Friday’s practice definitely got the No. 7 Tigers (12-2) in the mood for football.

Conversely, there was just a smattering of snow and the trademark red turf was still showing when No. 3 seeded EWU worked out on Friday morning at 11 a.m. local time.

These two teams didn’t take long to put themselves on the FCS map this season.

Towson was the first team to start the record-setting streak of FCS wins over Football Bowl Subdivision squads with a 33-18 smacking of Connecticut on the opening night of the 2013 season.

Two days later, Eastern Washington toppled then No. 26-ranked Oregon State, 49-46, for one of the most significant FCS-over-FBS upsets of all time.

But the similarities don’t go much farther for these two talented teams.

Much like last week’s matchup between Towson and Eastern Illinois, this semifinal showdown features a contrast of styles between the physical, rushing attack and hard-hitting defense of Towson going against the wide-open passing attack and more finesse styling of Eastern Washington.

“They are a physical football team on both sides of the ball,” EWU coach Beau Baldwin said of Towson. “They are well-coached and know how to handle big games and win on the road. They are a tremendous challenge for us.”

Baldwin was particularly impressed by West, who is closing in on the FCS record for single-season yardage (he has 2,295 yards, 31 short of the 2,326 gained by Jamaal Branch of Colgate in 2003) after breaking the mark for rushing touchdowns (38) and tying the record for overall TDs (39) held by Delaware’s Omar Cuff (2007).

“After watching him, he’s as good as any running back I’ve seen in my career here at Eastern,” said Baldwin.

Duel-threat sophomore quarterback Vernon Adams fuels the Eastern Washington attack. Adams is third all-time in single-season TD passes with 53 and has passed for 4,600 yards, while rushing for 540.

Adams and West finished second and third respectively to Eastern Illinois quarterback Jimmy Garoppolo of Eastern Illinois when the Payton Award voting was announced on Monday night in Philadelphia.

Adams has a favorite target in freshman receiver Connor Kupp, who won the Jerry Rice Award as national freshman of the year after breaking the FCS freshman records for catches (85) and receiving yards (1,567), set by Appalachian State’s Sean Price in 2012. Kupp also has 21 TD receptions, tying him for the fourth-best total in FCS history and the best for a freshman.

EWU’s offense is balanced by running back Quincy Forte, who has 1,131 yards, including 392 yards in two Eagle playoff wins.

Another contrast is the experience level of the two teams.

Eastern Washington has participated in the NCAA Division I Football Championships three times in the past four years, winning the national championship 20-19 over Delaware following the 2010 campaign and reaching the semifinals for the second straight year.

The Eagles are 8-1 during that time frame.

“This is an extremely talented football team and this is going to be quite a challenge,” Ambrose said of EWU. “Everyone says we are suppose to enjoy this, but we aren’t satisfied. This team has a goal in mind and we won’t be satisfied with anything less.”

Towson, which has won 11 consecutive road games over a two-year span, has high hopes despite the fact the Tigers have made the playoffs for just the second time and has only three previous games of FCS postseason experience.

Eastern Washington, meanwhile, is 24-3 at home since installing the red turf at Roos Field and is 6-0 at home this season.

But this is a game that is likely to come down to which team controls the line of scrimmage.

“The line play on both sides of the ball has been outstanding all season,” said Ambrose. “That is one of the main reasons for our success.”