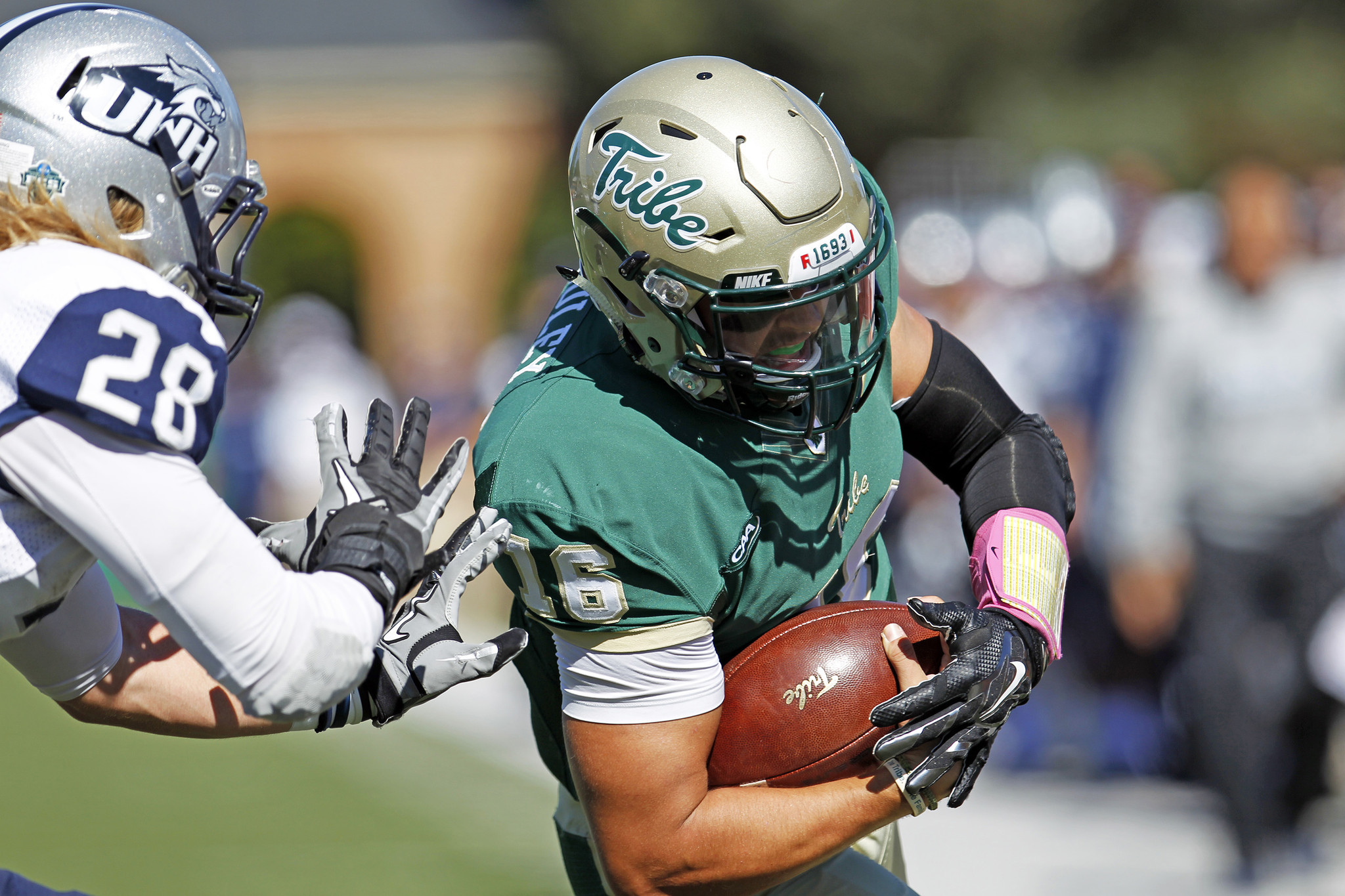 Editor’s Note: This story is courtesy of unhwildcats.com

WILLIAMSBURG, VA. — Dalton Crossan rushed for 109 yards, including a 37-yard touchdown, but the 19th-ranked University of New Hampshire football team was defeated 34-18 by 24th-ranked William & Mary at Zable Stadium on Saturday afternoon.

UNH, which entered the game on a two-game winning streak, is now 3-3 overall and 2-2 in the CAA. William & Mary won its second consecutive game to improve to 4-2, 3-1.

Crossan eclipsed 100 rushing yards for the second consecutive week and finished with 186 all-purpose yards, including a 54-yard kickoff return.

Sean Goldrich, in his first action since incurring an injury Sept, 12 at Colgate University, was 15-of-29 for 154 yards and two interceptions. Crossan led the Wildcats with six catches for 23 yards while Jordan Powell  recorded career highs in both catches (five) and receiving yards (53).

Casey DeAndrade recorded a game-high nine tackles, including one for a loss, and two pass breakups. He also had a 90-yard punt return for a touchdown. Hayden Knudson was also credited with nine tackles.

Special teams highlighted the first quarter for UNH as Trevon Bryant (St. Augustine, Fla.) returned the opening kickoff 64 yards to the W&M 36 yard line. The Wildcats’ offense was held to a 3-and-out, however, and the Tribe gained possession at its 12. New Hampshire’s defense yielded one first down but forced the home team to punt from its 38.

DeAndrade fielded Hunter Windmuller’s punt at the UNH 10, broke through the blocking bubble and found a seam down the middle of the field, then cut back to his left at the W&M 10 to avoid the last Tribe defender for a 90-yard touchdown return. Christian Breda kicked the PAT to give New Hampshire a 7-0 lead at 10:40.

Cluley capped the drive, which featured six carries for 45 yards, on a two-yard TD play-action rush in which he won the race to the left pylon.

On their next possession, the Tribe advanced to the UNH 28 and lined up for Nick Dorka, Jr.’s 45-yard field goal attempt but they were whistled for an illegal snap and opted to punt.

The Wildcats, who were held to -9 yards of total offense on nine plays in the first quarter, marched 80 yards on six plays on their first drive of the second quarter to regain the lead, 15-7 at 10:09. Goldrich’s 35-yard pass to Rory Donovan down the right sideline on third-and-11 extended the drive to the W&M 46.

Two plays later, Crossan took an inside handoff up the middle and raced untouched into the end zone for a 37-yard scamper — the longest run of the season by any Wildcat. UNH lined up in a spread formation on the PAT and Trevor Knight rolled to his right and lobbed a pass over a defender complete to Matt Torrey for two points.

Following a touchback on the ensuing kickoff, UNH began the drive at its 25 with 2:05 remaining in the first half. Consecutive Goldrich completions to Mike Kelly for 11 yards and Powell for 18 yards advanced the ball to the W&M 46 in just 17 seconds.

Two more completions to Crossan and Powell set up first-and-10 at the Tribe 34. Three plays later, Crossan’s five-yard run gave the ‘Cats a first down at the W&M 21 with 48 seconds on the clock. Goldrich’s eight-yard run made it first-and-goal at the 10 and he spiked the ball to stop the clock with 25 seconds to play.

The Wildcats snapped the ball on third down with five seconds left. Goldrich rolled to the right and threw a pass back to Torrey, who was alone in the front of the end zone but couldn’t corral the ball and UNH entered halftime trailing 21-15.

The Tribe began the third quarter with possession and was stopped on fourth-and-2 at the UNH 22 when DeAndrade met Anderson and the line of scrimmage and Akil Anderson came in to halt forward progress and give the ball to New Hampshire.

On that next drive, Goldrich marched the Wildcats into the red zone. Completions to Crossan and Neil O’Connor gained 23 yards to quickly give the ‘Cats first-and-10 at the UNH 49. Kelly’s 10-yard end around on third-and-5 at the W&M 33 extended the drive and, on the next play, Goldrich connected with Powell for a 13-yard completion to make it first-and-goal at the 10.

After a sack pushed the line of scrimmage back to the 19, a 12-yard end-around by Amechie Walker, Jr. set up third-and-goal. Jared Allison, who was flanking Goldrich to the left, took a direct snap but was stopped for a two-yard gain.

New Hampshire was held to a 3-and-out on its next possession. Breda mishandled the high snap at the UNH goal line, gathered the ball and punted a ball into the ground that DeAndre Houston-Carson picked up at the UNH 17 and returned to the 10. Cluley kept the ball for a five-yard score that increased the Tribe’s lead to 27-15 with 19 seconds to play in the third quarter.

UNH’s promising drive — the ‘Cats advanced the ball 17 yards on four plays — was stalled by a clipping call and New Hampshire was forced to punt. Breda’s kick was blocked by Houston-Carson to give the Tribe possession at the UNH 30.

On the next play, Cluley found DeVonte Dedmon and the 2 and he fought the last two yards into the end zone to push the home team’s advantage to 34-15 at 12:21 of the fourth quarter.

Crossan regained momentum in favor of the ‘Cats when he returned the ensuing kickoff out of the end zone 54 yards. A 19-yard pass play to Kelly followed by a 15-yard completion to Powell gave UNH first-and-goal at the 7. Breda’s 27-yard field goal pulled the Wildcats within 34-18 at 9:37.

New Hampshire got the ball back with 4:23 to play, but on first-and-10 at the UNH 43, Goldrich’s pass was intercepted by Zach Fetters at the 50 and returned 21 yards to secure the victory.

DeAndrade’s punt return TD marked the first by a Wildcat since Nov. 30, 2013 when Nick Cefalo scored on an 86-yard vs. Lafayette. The longest punt return in UNH history is 92 yards by Dave Wissman vs. UMass on Nov. 14, 1981.

The Wildcats’ next home game is Oct. 31 (1 p.m.) against the University of Rhode Island.