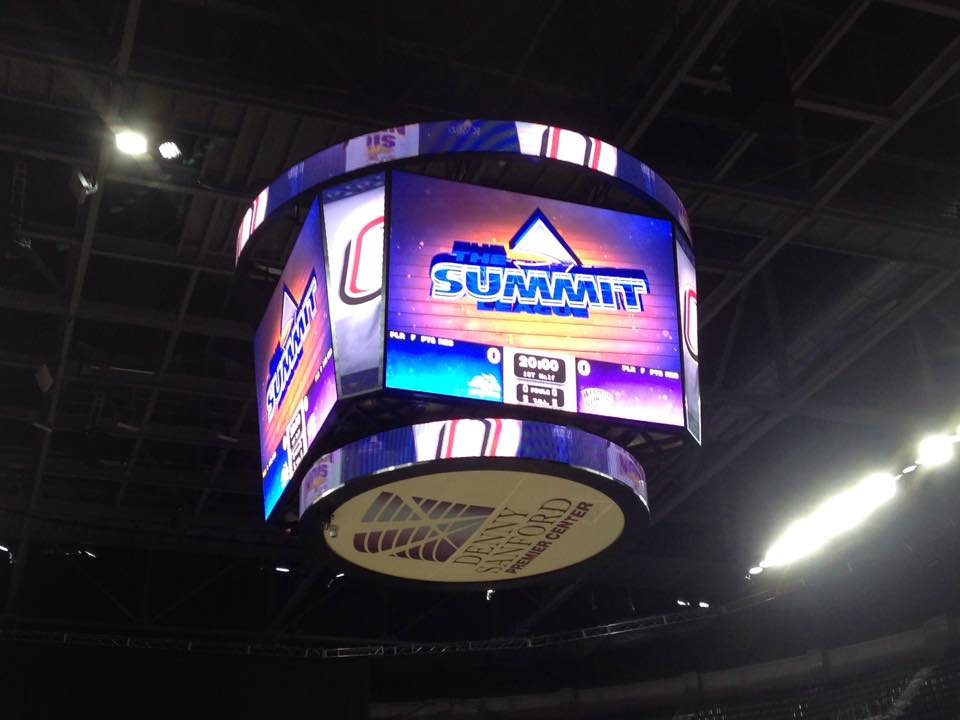 Douple was getting a quick dinner in the media room between tournament sessions and had a reason to feel joyous.

The tournament moved to Sioux Falls, SD seven years ago and has had a great run in the 6,878 seat Sioux Falls Arena, setting numerous tournament attendance records for both men and women along the way.

Douple’s moniker “March to the Summit” might have been a prophecy of things to come for the Summit.

The tournament moved into the brand new T. Denny Sanford Premier Center, next door to the old Arena and promply set the tournament women’s single session attendance record of 8,171.

The new mark eclipsed the previous record of 5,871 set last year during the semifinals. The 8,171 mark was by far the highest attended mid-major women’s tournament this year.

Douple is confident that this year will break the all-tournament attndance record of 21,158 set in 2013.

Top seed South Dakota opened up tournament play with a 78-70 win over the Fort Wayne Mastadons.

2013 tournament MVP Nicole Seekamp poured in 25 points and dished out 8 assists to lead the Coyotes (24-6) in a tightly contested game.

The Dons (9-21) used 21 points and 5 assists from Haley Seibert and 20 points off thebench from Kamilah Carter to hold a 34-33 lead at halftime.

Raeshel Contreras hit a 3 pointer to open the second half for the Coyotes to take a 36-34 lead. A steal and layup by Seekamp extended the lead to 38-34. Carter hit a 3 pointer for the Dons to stop the quick USD run.

The Dons battled back to finally take the lead 64-62 on two free throws by Seibert.

The number one seed has never lost a quarterfinal game. The eight point final margin was the closest for a 1 vs. 8 matchup since 2002 which was a five point margin.

South Dakota improves to 6-1 all-time in tournament history and is on a four game win streak.

The Coyotes will play the winner of tomorrow’s Western Illinois-IUPUI game on Monday at 12 noon CST.

The second seeded South Dakota Jackrabbits (22-8), who have won 5 of the last 6 Summit League championship tournaments, pulled away late in the second half to stop the Denver Pioneers (8-23) 79-61.

Megan Waytashek led the Jacks with 21 points, 8 rebounds and 3 assists and was 4-6 from 3 point range.

Mariah Clarin chipped in with 13 points and Macy Miller had 11.

A layup by Jordan Johnston gave the Pioneers their first of only two leads for the game at 17-15.

Waytashek scored 17 of her game high 21 points in the first half as the Jacks built a 41-34 halftime lead.

The Pioneers weren’t finished. After back to back 3’s by Morg Van Riper-Rose and Jordan Johnston, a Jacks turnover by Mariah Clarin turned into a jumper by Jacqlyn Poss that gave Denver its second and last lead of the day at 42-41.

The Jacks, who are 16-1 all time in the tournament, will play the winner of Oral Roberts-North Dakota State on Monday at 2:30.