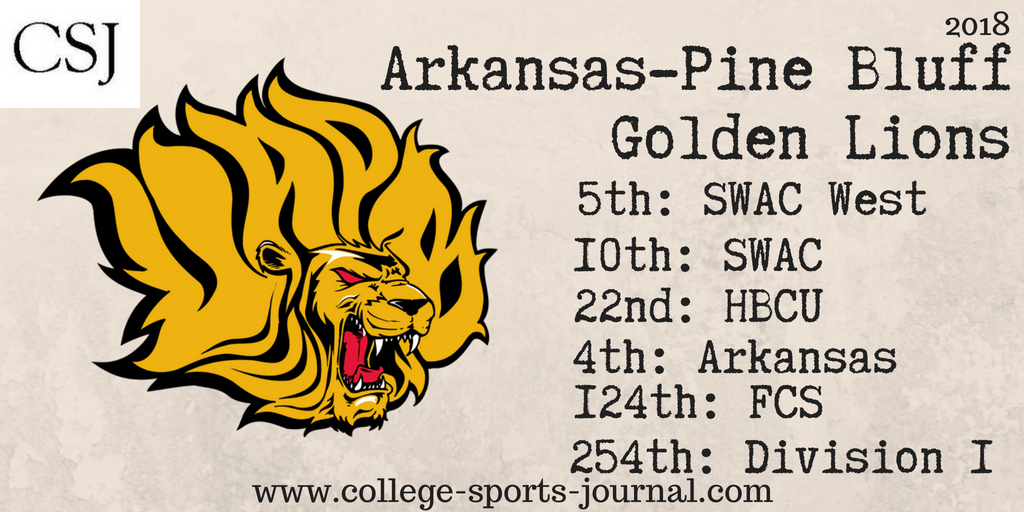 2017 In A Sentence: A fifth straight losing season (2-9, 1-6) ended a ten-year run of Monte Coleman as the Lions’ head coach and now Cedric Thomas takes over at his alma mater after being the defensive coordinator at Alcorn State.

Biggest Shoes to Fill: DE Tashad Charity was a second team All-SWAC performer in his last season in Pine Bluff. He recorded a team high 12 tackles for a loss to go with his 51 total tackles and added six sacks.

Key Player: The Lions may have not had the results they wanted last year but should have a formidable running attack headed by senior RB KeShawn Williams. He is the leading returning running back in the SWAC this year. He totaled 703 yards on the ground and averaged 5.6 yards per attempt in 2017.

Fearless Prediction: UAPB last won the SWAC West Division in 2012 and also won the SWAC title game that year. For new head coach Thomas, the Lions will need to improve their defense (gave up over 33 points per game in 2017). UAPB also plays just one FBS opponent (Florida International) after playing two such opponents last year (Akron & Arkansas State) and added an additional sub-DI team (Cumberland (TN)) on the schedule so expect the Lions to surpass the two win total from a year ago.