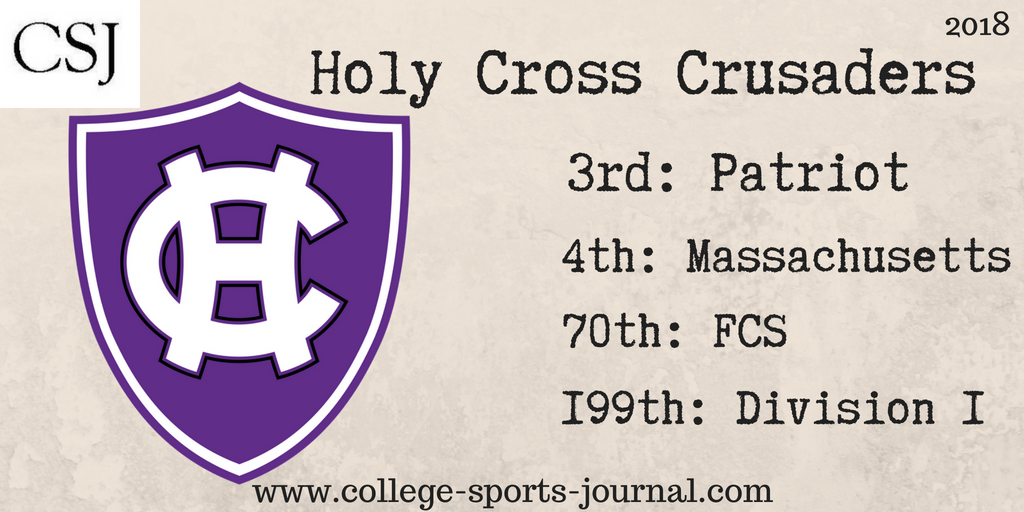 2017 In A Sentence: It was supposed to be a crowning achievement year for a veteran Holy Cross team, but despite some near-epic wins, the wheels came off in a deeply disappointing 4-7 season, with head coach Tom Gilmore getting fired halfway through the season.

Biggest Shoes to Fill: QB Pete Pujals was a tremendously talented QB for the Crusaders, a four-year starter who threw for 11,695 yards and 84 TDs, while rushing 511 times for 1,756 yards and 19 TDs. Not only is Holy Cross navigating a new head coach in Bob Chesney, they also need to replace more than 100 career TDs from their signalcaller.

Key Player: The new Holy Cross offense will undoubtedly be built on top of the efforts of Pujals’ top target last season, WR Blaise Bell, who caught 46 passes for 601 yards and 8 TDs. How Bell and whomever emerges as the Crusaders’ opening-day QB will be critical in moving things forward for Holy Cross offensively in 2018.

Fearless Prediction: In the month of September and October, Holy Cross faces the defending Patriot League co-champs (Colgate), a Power 5 team (Boston College), the defending Ivy League Champs (Yale), and a team that has made the FCS Playoffs for more than ten years running (New Hampshire), adding perennial Ivy League powers Harvard and Dartmouth for good measure. This would be a daunting schedule for a Patriot League team with a returning head coach and returning 15 or more starters, let alone this rebuilding Holy Cross team. A season hovering around. 500 with this murderer’s row of a schedule would have to be seen as a rousing success – if they can pull things together quickly, because they’ll need to.