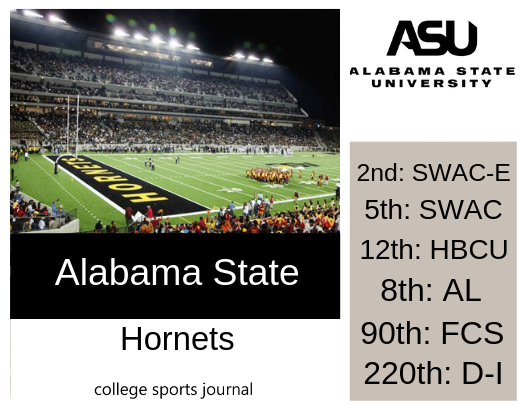 2018 In A Sentence: Alabama State’s shock 28-25 win over Alcorn State seemed to put Alabama State in a good position going into the second half of the year, even after a brutal schedule put the Hornets at 2-4. But a 27-10 loss in the Magic City Classic to Alabama A&M instead seemed to put Donald Hill-Eley‘s team into a spiral, having Alabama State finish with a 4-7 record.

Biggest Shoes to Fill: LB Dennis Roberts IV finished the season with 9 tackles for loss and 3 interceptions, and sealed the Hornet’s season-ended win over Mississippi Valley State with a game-clinching sack. The Hornets lose a few solid players on defense, but Roberts was the most consistently effective.

Key Player: A young Alabama State offense should be led this year by QB KHA’Darris Davis, who had some great moments last year but didn’t deliver consistently. His 2 TD performance at Alcorn last year delivered enough to get the Hornets the victory, and Hornet fans will be looking for more performances like tha. Only a junior, he has the potential to deliver more of those types of games in 2019.

Fearless Prediction: Alabama State has one of the weirdest schedules in Division I, with four out of their first five games at home, followed by five consecutive games on the road (though one is the Magic City Classic in nearby Birmingham, and another is a game at UAB, also in Birmingham). Two of their home games come against Celebration Bowl contenders Grambling State and Alcorn State, and their out-of-conference schedule versus UAB, Florida State and Kennesaw State is brutal. If everything falls exactly right – and the Hornets can beat Alcorn for a second consecutive year – they could be good enough to make the SWAC Championship game. If not, another 4-7 season could be in the offing.