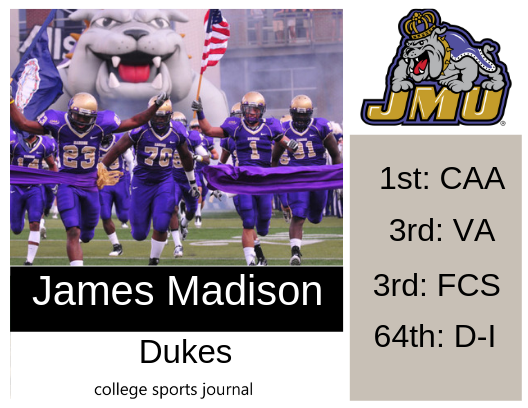 2018 In A Sentence: James Madison fell short of expectations, missing out on the conference title and losing in the second round of the FCS playoffs to Colgate. The Dukes struggled in the red zone and with turnovers. A 9-4 season was certainly a disappointment in Harrisonburg.

Biggest Shoes to Fill: James Madison returns all of its 2018 starters on defense except for one, DB Jimmy Moreland. Moreland was known as a ball hawk at JMU finishing his Dukes career as the all-time leader in interceptions (18) and pick-sixes (6). Affectionately known to the JMU fan base as Jimmy Effin’ Moreland, the DB was a 7 th round pick of the Washington Redskins and is currently excelling in training camp. Moreland’s spot on the Dukes’ defense will be filled by All CAA DB Rashad Robinson coming off of a foot injury.

Key Player: There is no doubt where the key is to the Dukes returning to the place they want to be: its QB Ben DiNucci. Coach Curt Cignetti officially named DiNucci as his starter for the 2019 season. DiNucci has to protect the ball better than he did in 2018 when he threw 12 interceptions, including 5 in the playoff loss to Colgate. DiNucci also showed flashes of brilliance with his arms and legs in wins against Rhode Island, Richmond and Towson.

Fearless Prediction: Its Frisco or bust for JMU and its fan base. The team has the talent and the experience to make another run at the title. Anything short of that will be considered a down year.