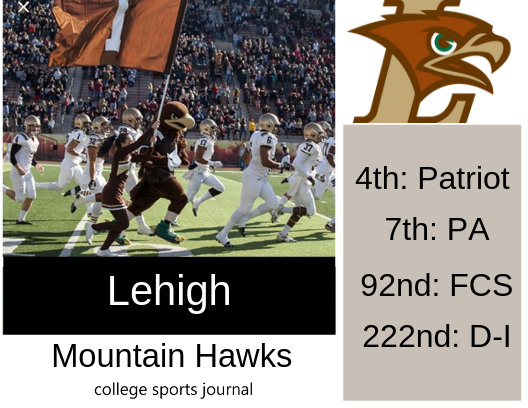 2018 In A Sentence: A disappointing 3-8 was salvaged somewhat with a 34-3 win against their long-time Rivals Lafayette. With the win, head coach Andy Coen retired as the winningest head coach in program history.

Biggest Shoes to Fill: Fighting through injury, RB Dominick Bragalone still managed to rush for 757 yards and 7 TDs, which was good enough to end up as Lehigh’s all-time leading rusher with 4,324 yards and 52 TDs. A four-year letterman, he will be sorely missed in the Lehigh backfield.

Key Player: With a rebuilding offense, WR Jorge Portorreal will need to continue to build on two very good seasons to have the Lehigh offense achieve that second gear it needs to return to the top of the Patriot League. He led the team last year on both receptions (55) and receiving yards (794), but needs to get into the end zone a bit more (only 3 TDs last year).

Fearless Prediction: Lehigh chose former Holy Cross head football coach Tom Gilmore as their head guy for 2019, where he inherits a team and a fan base that is not accustomed to 3-8 seasons. An instant rebuild, however, doesn’t seem likely with an offense replacing four-year lettermen at both QB and RB and three brutal early road games against Villanova, UC Davis, and Colgate. If Lehigh is to contend for the Patriot League title, they’re going to have to shock the world in Hamilton, New York on October 5th. If they don’t, a more realistic, modest goal to achieve would be a .500 record.