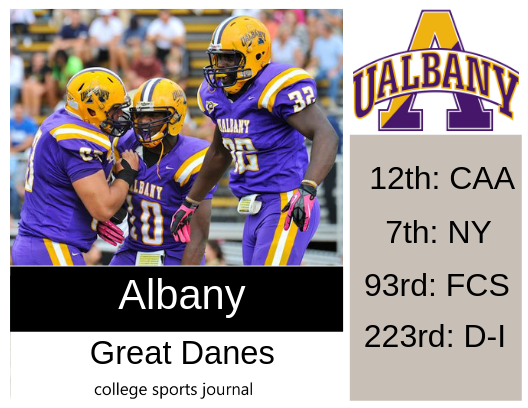 2018 In A Sentence: Albany had a tough season again in 2018, only winning three games and going winless on the road. The Great Danes struggled through a tough CAA schedule, but shocked the league by defeating in-state ranked rival Stony Brook on the last weekend of the season to go out on a high note.

Biggest Shoes to Fill: RB Elijah Ibitokun-Hanks decided to transfer for his senior season following a 2018 season where he lead the Great Danes in rushing with 757 yards. Ibitokun-Hanks played in only one game due to injury in 2017, but had a great 2016 where he ran for 1407 yards and was First Team All CAA. His transfer will be a big hole to fill for the Great Danes.

Key Player: One bright spot for Albany last year was the play of WR Dev Holmes, who led the Great Danes with 734 yards receiving and 5 TDs as a freshman. Head coach Greg Gattuso will need to lean on his young star, especially in the early going.

Fearless Prediction: Albany was at a talent deficit through last year, and 2019 looks to be another year at the bottom of the CAA for them as they break in a new quarterback. Their best hope is to ruin another team’s chances, like they did for Stony Brook last year.