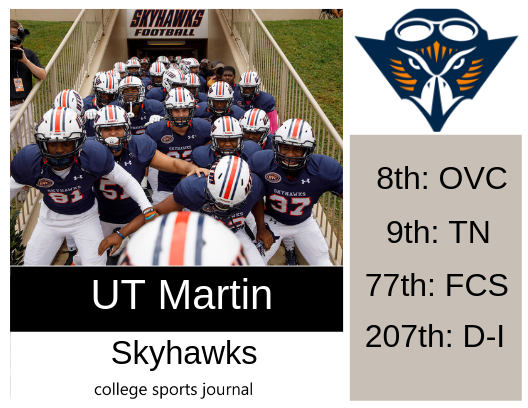 2018 In A Sentence: Tennessee-Martin struggled to a lowly 2-9 record in 2018. The culprit for the Skyhawks was generally their defense, which had a hard time getting off the field. The Skyhawks regularly allowed over 30 points a game as UT Martin went 0-6 on the road.

Biggest Shoes to Fill: When a defense struggles to create turnovers or get stops, the best way to combat that is to chew clock in the run game. Last year, the Skyhawks leading rusher was RB LaDarius Galloway. Galloway accounted for 540 rushing yards and five touchdowns in a crowded backfield that included 4 players with at least 45 carries. Galloway received more than 1/3 of those touches and added 28 catches in the pass game.

Key Player: QB Winn Dresser was the best of the three quarterbacks who saw action for the Skyhawks in 2018. Dresser completed an impressive 65% of his passes, but threw 9 interceptions in his 7 games of action. If Dresser can cut down on the mistakes, the Skyhawks offense should be improved. If Dresser struggles out of the gate, Shyhawk head coach Jason Simpson will look to QB Joe Hudson to pick up the slack.

Fearless Prediction: The Skyhawks are in for another forgettable season in 2019 as the top half on the OVC continues to get stronger.