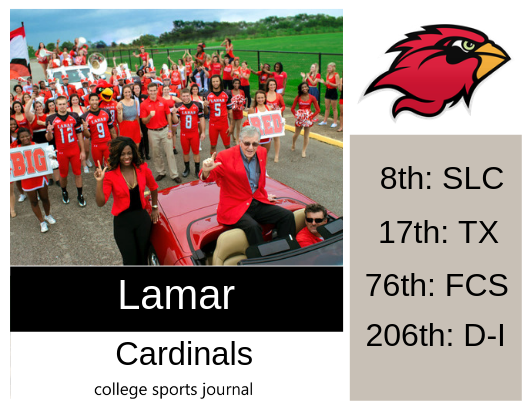 2018 In a Sentence: The Cardinals finished with its first ever FCS playoff appearance (first round loss to Northern Iowa) with a 7-5 overall (6-2 SLC) record–this after finishing just 2-9 in 2017.

Biggest Shoes to Fill: OT Garret Bowery was a member of Coach Mike Schultz‘s initial signing class at Lamar and was named the Southland’s Offensive Lineman of the Year in 2018. A junior college-transfer, Bowery and the rest of the Lamar offensive line was a big reason why the Cardinals ranked 12th nationally in rushing yards per game.

Key Player: QB Jordan Hoy was named as the Southland’s Co-Newcomer of the Year a season ago after replaceing injuried and now departed Darrel Colbert, Jr. A transfer from FBS Old Dominion, Hoy led Lamar to back-to-back road wins late in the season, and was named the conference’s offensive player of the week on both occasions. Hoy piled up 692 yards of total offense and seven touchdowns during those two games. He played sparingly in the season finale against McNeese, although it was Colbert who drove the Cardinals on a game-winning touchdown drive in the fourth quarter. Now a senior, Hoy will be the key to the success for the Cardinals to see if they can duplicate another playoff run.

Fearless Prediction: Lamar was a surprise playoff team a year ago and in the 2019 campaign are looking to do something that hasn’t happened in Beaumont since 1966 and 1967 – record back-to-back winning seasons. The Cardinals return 12 starters combined between offense and defense. Unfortunately for the Cardinals, only four of those starters return on defense. The Cardinals will likely score a lot this season with a potent offense but with an inexperienced defense, look for Lamar to give up a lot and that will result in dip in the win column.