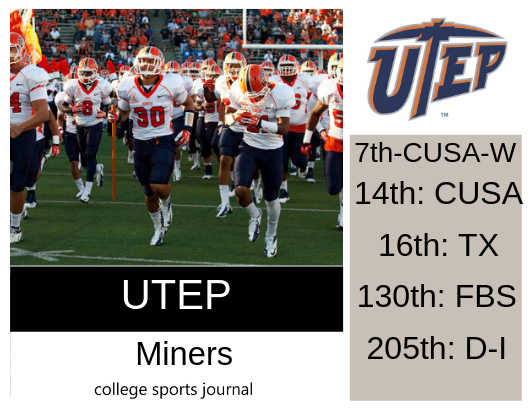 2018 In a Sentence: UTEP had an awful season in 2018, starting with an opening weekend loss to FCS member Northern Arizona. It never got any better from there, with the Miners only win of the season (1-11, 1-7 CUSA) coming against equally maligned Rice.

Biggest Shoes to Fill: RB AJ Hotchkins was the only real bright spot on an otherwise bad football team. The graduate transfer from Oregon had a great senior season with 126 tackles and seven sacks.

Key Players: With a team that struggled so badly in 2018 its hard to come up with one key player. The Miners will need a step up in effort all across the roster if they don’t want to repeat last year’s poor record. But if one player will be key to turn this team around it is QB Kai Locksley, who is now healthy after a severe ankle injury hampered his production last season.

Fearless Prediction: UTEP had a horrid season in 2018. Nothing that occurred in the off season indicates that the Miners will be any better than the worst team in FBS again in 2019.