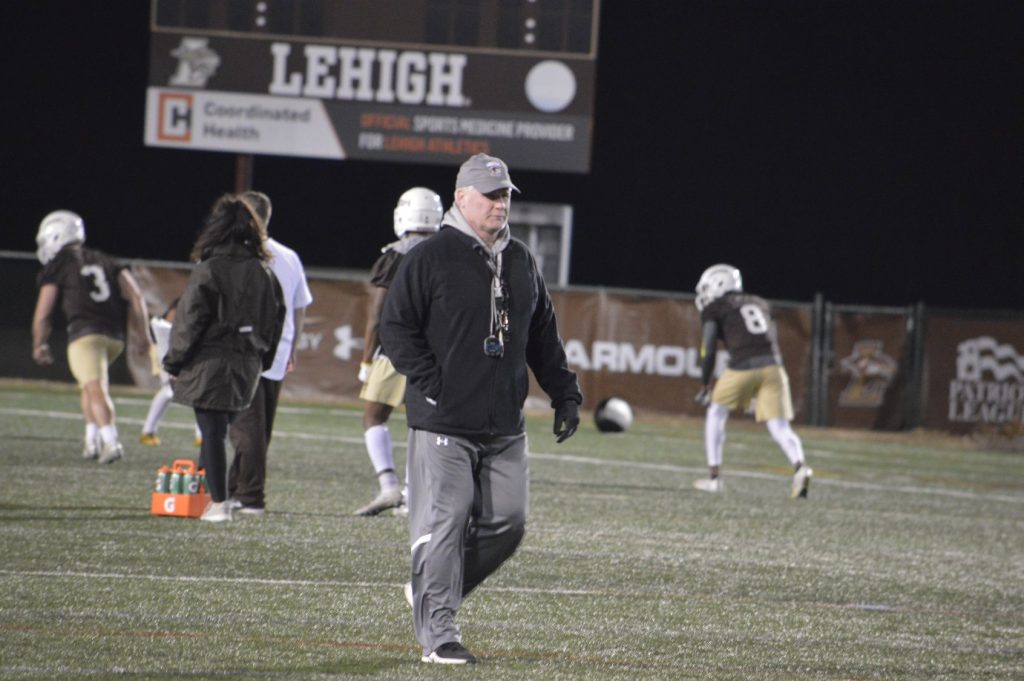 For Gilmore, hired in early January after a lengthy coaching search following the retirement of former Lehigh head coach Andy Coen, it was a welcome step back into the whirlwind of football coaching.

“In the beginning, there were a lot of different processes happening at the same time,” Gilmore told me. “I had to get on-boarded at Lehigh while I was trying to assemble a staff and rally our recruiting efforts at such a late date. I was traveling quite a bit but once the players reported in late January, we also had to get the off-season workouts kick-started.”

“When recruiting ended in mid-February,” he continued, “I finalized the staff and got the new members on-boarded, while evaluating our returning players through film study of last season. Once the full staff was assembled, we began to build the offensive, defensive and special teams playbooks.”

The challenges of being a Division I football coach – the recruiting, the staff-building, even the organization of setting up the program the way Gilmore wants it – are clearly something that he relishes, perhaps even a bit more so now.

That’s because midway through the 2017 season, Gilmore was fired at Holy Cross, a move that could have been something that ended his football career but instead appears to have brought his fire to a Lehigh football program that has seemed to truly need some sort of spark.

From the Patriot League And Back

In the beginning of the 2017 season, Holy Cross led FBS UConn for three quarters after falling late, 27-10. Two week later, the Crusaders blew the lid off of perennial CAA power New Hampshire 51-36, setting their record at 2-1.

With 5th year senior QB Peter Pujals, who would end up on the New York Giants’ practice squad and would ultmately play for the Atlanta Legends in the AAF, the Crusaders were seen, early on, as a real contender for the Patriot League title.

But Holy Cross would go from a very impressive 2-1 start to 0-3 against Dartmouth, Lafayette and Yale that led to athletic director Nathan Pine, who has since left Worcester for Air Force, to terminate Gilmore’s contract during the Crusaders’ bye week.

During the press conference announcing Gilmore’s hiring at Lehigh, questions surrounding what had happened in 2017 were unavoidable.

But as ever, Gilmore handled the questions with class and exuded that not only had he learned from the experience, the whole incident was now in the past.

Once he left Holy Cross, Gilmore joined the staff at Wake Forest as a defensive assistant, where he helped the Demon Deacons reach a bowl game. By his own admission, stepping away from being head coach allowed him to refocus on some of the things he loved about coaching away from the responsibility of being a head guy.

It was from that he was able to apply for Lehigh’s head coaching vacancy, refreshed and ready to jump right back into the Patriot League.

“You learn different methods,” he said. “on how to accomplish your goals. I certainly have learned many of those things over the years and appreciate all of those experiences I’ve had.”

As this Lehigh spring football season nears its final week, Gilmore exudes a feeling of organization over what could have been a chaotic process.

Changing head coaches is never a completely smooth process, but Gilmore, who knows exactly what it takes to run a Patriot League program, jumped right in.

That started by heading on the road for recruiting to add more recruits to the Lehigh incoming class, adding to the names from the early recruiting period back in December, when Coen was still the head coach.

“That was necessary because of the deficiencies in the roster due to graduation and attrition,” Gilmore said. “It is also the result of the staff making an incredible effort to reconnect with some prospects who were already on the board while finding others with whom we made a late push for the first time. We were successful in landing some really good prospects in each category and I believe that we yielded a good class.”

Overall, Lehigh secured one of the largest incoming classes in quite a while, with a significant number coming in the late signing period and beyond, adding about five names late in the process. Then there was the process of interviewing the existing coaching staff and filling out the rest of his coaching team.

“When recruiting ended in mid-February,”, he elaborated, “I continued to finalize the staff and get the new members on-boarded while evaluating our returning players through film study of last season. Once the full staff was assembled, we began to build the offensive, defensive and special teams playbooks.”

Gilmore retained one key member from the prior administration – offensive coordinator Scott Brisson – but managed to pull together a mostly new staff, with some names from his rolodex from his days at Holy Cross. One, running backs coach Anthony DiMichele, played under Gilmore.

“I’m very excited about the coaching staff,” Gilmore told me. “They are an intelligent, hard-working and high-energy group. They bring much to the table in terms of Patriot League experience and they are outstanding recruiters. Their care factor is extremely high, so I am confident that the players will quickly connect and with them.”

Just today, Gilmore put in place the final piece of his coaching staff, hiring WR coach Brandon Lemon, who was working as a graduate assistant at Notre Dame.

“I’m excited to have Brandon join our staff,” Gilmore said. “He fits in well with our current staff. He comes highly recommended from coaches I know personally, and will bring a lot of energy to this position.”

Finally this spring was a welcome move away from personnel decisions and towards what Gilmore loves more than anything – getting out on the football field to establish what he has in terms of returning players.

Part of that process is laying out his vision for the Mountain Hawk football program.

“The most important thing we are hoping to accomplish in spring ball is to establish good fundamentals in all phases of the game while establishing great work habits,” he told me. “We will install a modest amount of the schemes and try to build confidence in the base portions of the offense, defense and special teams.”

With Brisson returning as well as defensive coordinator Mike Kashurba, who was on Andy Coen’s staff last year and who worked with Gilmore in the past, there is some carryover from last year.

“We will strive to be great in everything we do,” Gilmore said. “That means we will do everything at the highest level possible but we will have great grit, great effort and a great attitude every time we get to work. We will strive to “raise the bar” in every way each time we are focused on football.”

“We will not be outworked but we will have a lot of fun at the same time,” Gilmore told me. That seems to work as a mission statement for Lehigh football.