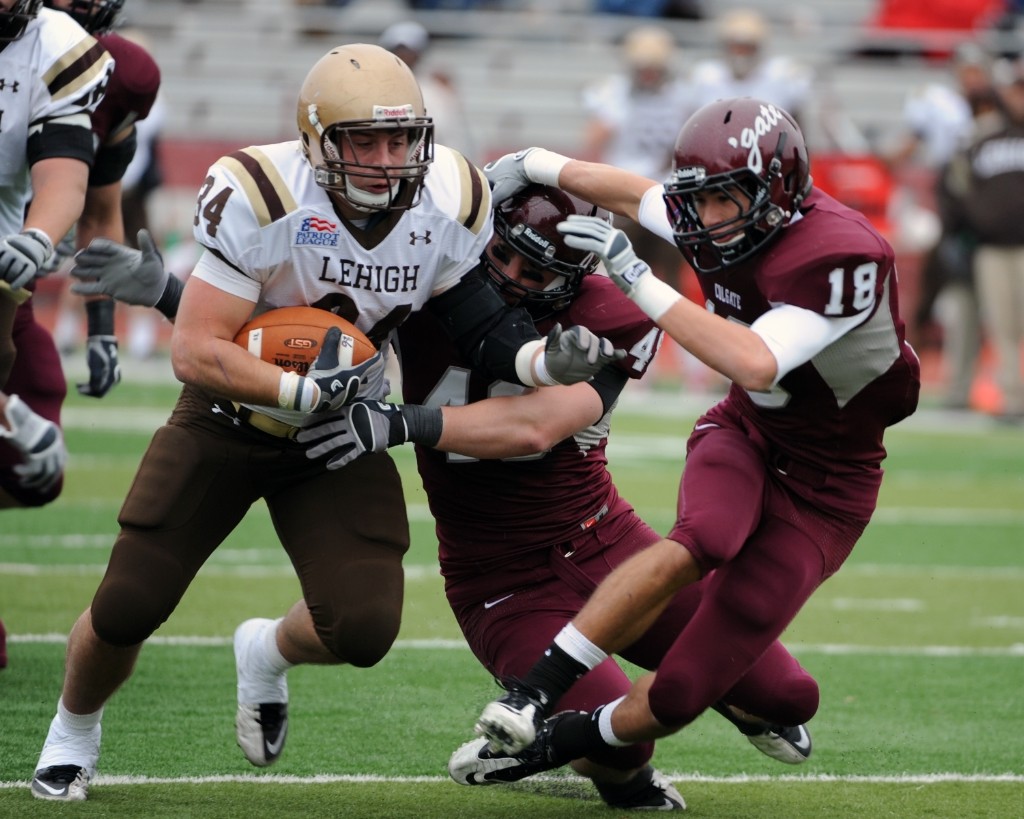 PHILADELPHIA, PA. — Before the season even started, Colgate senior running back Nate Eachus had to have looked at this home game at Andy Kerr stadium and thought it would be his best opportunity to put on a show.

The preseason Patriot League favorite for the Payton award didn’t say anything about – he’s too humble for that – but you have to believe he knew that the national TV coverage on CBS Sports Network, and Colgate’s traditional place in the Patriot League hunt, gave him a chance to show off his skills on a national level.

He did have a pretty good day in his final game against Lehigh, with a gutty performance befitting the Hazelton, PA native.

But it ended up paling in comparison to the guy doing the same job on the other sideline.

After Lehigh return man Jason Suggs set Lehigh up in good field position after a good opening return, and junior running back Zach Barket busted through the Colgate defense for a fourteen yard rumble on the second play from scrimmage, Lehigh stalled at the 38 and ended up punting.

Colgate then got the ball back, and embarked on a quintessential Colgate drive: 14 plays, 67 yards, with Eachus making timely runs and sophomore signalcaller Gavin McCarney making key passes and converting a key 4th down.

But, crucially, Lehigh would stop Colgate when it mattered – on third down.

Barket, though, wasn’t going to just sit back and let Eachus and McCarney steal the show.

On the very next drive, the Schuykill Haven, Pennsylvania native escaped for an eleven yard gain, and then a fourteen yard scamper to get into Colgate territory.

Having established himself as a serious threat, with three straight runs of more than ten yards, Colgate’s pass defense was forced to come up to keep an eye on the running game – which allowed Lehigh quarterback Chris Lum to hit wide-open tight end Jamel Haggins in the middle of the field for a 33 yard touchdown grab.

After a huge three and out on the Raiders’ next drive, Barket would feature again on the next drive, with a 12 yard run, and then a 39 yard counter trey where he’d explode around the block around right tackle and accelerate into the end zone to give Lehigh a 14-3 lead.

In Barket’s first five touches of the football, he had five runs over ten yards, and over 90 yards of rushing overall.

It was just the beginning of his breakout, 188 yard rushing, 4 touchdown day, where he would end up easily outgaining Eachus by the end of the first half.

“You had to be impressed by the running game.” head coach Andy Coen said afterwards, “All the guys did a great job running the football, and Lum did a nice job, with his leadership, getting us in the right place. I’m really happy with the offense.”

But Colgate would bounce back.

Raider wideout Chris Looney would make a spectacular grab for a touchdown, catching a perfectly-thrown pass by McCarney in an area where only he could have caught the ball.

And when Uglietto nailed a pretty 42 yard field goal, all of a sudden the score was 14-12, and the Lehigh offense would again need to respond to keep ahead of the Raiders.

Barket would hear his number called once again.

In a run that pretty much summed up the breakout day for the local high school legend, Lum would fake out the entire Colgate defense, fading right before lofting the ball to his left side, into the sure hands of Barket for a screen pass.

After kicking into gear, Barket would swim through several tacklers – carrying a few of them – into the end zone, where the ball would cross the plane for his second touchdown of the afternoon.

Barket, a record-setting high school running back who had 66 touchdowns his senior year, was starting to get familiar with the end zone in Patriot League play as well.

“I think we went punch-for-punch with them, which was really important,” Barket said after the game. “This game was a dogfight, and we hadn’t been in one of those in a while.”

In the second half, Lum would get some critical third and fourth down conversions to keep long drives alive, including a sneak on 4th and 1 and a perfectly designed pass to tight end Mark Wickware to set up Barket’s third touchdown of the afternoon, a 6 yard run off tackle.

“Any time you can win a game up here it’s impressive,” Coen said. “Our kids played well. Colgate played well on offense. They did a nice job keeping our guys off balance, but we made stops when we had to. Offensively we were pretty seamless in the second half. On our first four drives we scored three touchdowns and a field goal. Chris (Lum) did not have crazy numbers throwing the ball but we were very efficient throwing the ball. Today was another day with close to 500 yards of total offense, points so I’m very pleased with that.”

Yet Colgate, and Eachus, would not go away quietly into the night.

Matching the Mountain Hawks score for score, McCarney and Eachus did their level best to keep the Raiders in the game.

McCarney’s next drive, a quick-moving grinding drive, capped off an impressive 8 yard grab by Eachus for one score.

And after a Lehigh field goal, Eachus – also a high school legend in the Hazelton area as a highly touted multi-sport star – would score again in power 8 yard run down the right side.

Showing all of the grit that made him a Payton Award finalist, Eachus seemed determined to make his final tussle with Lehigh one to remember.

“We knew he was a good back,” Boyko said, “He posed a lot of challenges, but we stepped up when we had to.”

Lehigh head coach responded on the very next drive with something Lehigh hasn’t needed to do much of this year: grind out the ball.

Using a variety of rushers, the Mountain Hawks would grind out a drive with eight rushes and 42 yards.

Lehigh’s “O” line would allow all Mountain Hawk rushers to average more than 5 yards a carry, including a pretty 4th and 2 conversion where Wildcat quarterback Michael Colvin would elect to tuck the ball away keep on an option run, and surged ahead for a five yard gain.

Having established the run, it would be Barket, again, taking a screen toss and busting through the line to get his 4th touchdown on the afternoon.

“Zach was playing well and had [a dislocated shoulder] against Princeton,” Coen said. “We limited his play a bit in the last four games, but today was really the first time where we really said he’s the guy until he gets tired. He did a great job.”

“Playing with one arm isn’t the easiest thing to do,” Barket said after the game, admitting for the first time that his dislocated shoulder hampered him greatly during the month of October. “The more it heals, the better I’m becoming.

“This is typical Coal region weather, just like Friday nights,” Barket said, of the brisk, 41 degree cold. “I tend to get stronger as the game goes on, and it’s kind of my environment today.”

After Lehigh’s defense eventually stopped McCarney in Lehigh territory – even though two defensive penalties would keep Colgate’s hopes alive – it would be senior running back Matt Fitz, breaking through for a 44 yard run, and a 9 yard touchdown toss to senior wideout Jake Drwal, that would put Colgate’s upset bid to bed.

“This was our opportunity, on national TV, to rise up and show the world what we’re all about,” Boyko said. “We’ve got to keep the streak going.”

“You can’t blame the defense,” Eachus said after the game. “We made mistakes in the first half. I fumbled the ball. We gave a great effort, we got it close, but close isn’t good enough.”

“This will make us stronger going forward,” Barket added. “We’re going to have another point where we’re going to be in a dogfight in the fourth quarter, and we’re going to need our energy to close things out.”

“We’ll really be tested here, this next month, but I’m obviously very pleased about where we’re at right now.”