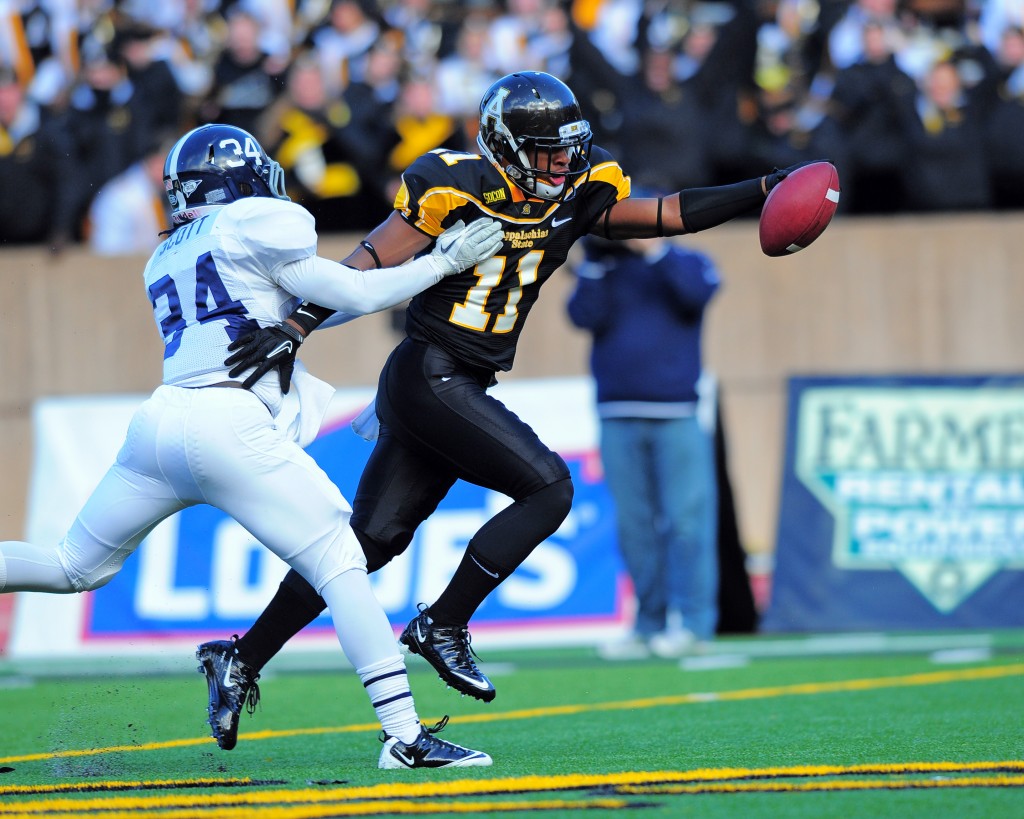 BOONE, N.C. — A year ago, Appalachian State felt the sting of losing to Georgia Southern as the No. 1 ranked team in the Football Championship Subdivision.

And on Saturday afternoon before 30,008 spectators at Kidd Brewer Stadium, it was No. 1 Georgia Southern experiencing that pain after a 24-17 Southern Conference loss that ended the Eagles’ seven-game winning streak.

The fifth-ranked Mountaineers (6-2, 4-1) held the Eagles to 201 yards of total offense — GSU’s lowest output since a 109-yard effort last year at Navy — and limited Georgia Southern (7-1, 5-1) to three points on three of four trips to the red zone.

“In the fourth quarter, it seemed like they lived down there,” said Appalachian State coach Jerry Moore. “I think the intensity level was where it needed to be today, that was the main thing.”

Trailing 17-3 at halftime, Georgia Southern rallied to tie a game that started with pre-game snow flurries, but settled into bright sunshine on a crisp fall afternoon.

J.J. Wilcox took a pitch from quarterback Jaybo Shaw and dashed around the corner for three yards to complete a 12-play, 60-yard drive on the Eagles’ first possession of the third quarter and Darrieon Robinson evened the game with his 46-yard TD punt return, breaking several arm tackles to make it 17-all a minute into the fourth period.

But Georgia Southern found it difficult to contain Appalachian State receiver Brian Quick all day long and Quick (four catches, 119 yards) hauled in his second touchdown pass of the game on the next ASU drive.

Moving from its own 33 to the Eagle 15 in eight plays, Appalachian State completed the game-winning scoring drive when a blown coverage left Quick free in the back of the end zone.

ASU quarterback Jamal Jackson (13-of-26, 222 yards and three TDs passing, 13 carries, 54 yards rushing), making just his third career start, rifled the ball to Quick, who managed to keep one foot in bounds and cradled the ball into his chest as he fell to the ground.

GSU defenders argued that Quick had not maintained possession, but two officials agreed he had held on and signaled the score that gave the Mountaineers a seven-point lead with 9:24 remaining.

Georgia Southern had three more chances to knot up the score, but the Eagles were forced to punt after reaching the ASU 48 and on another drive that failed at the ASU 46.

In between those drives, Georgia Southern let its best chance of the game slip away when cornerback Laron Scott intercepted a pass intended for Quick and returned it 26 yards to the ASU nine with 5:28 to play.

Jerick McKinnon was stopped for no gain on first down from the Wildcat formation and two Shaw passes fell incomplete, the second one when ASU cornerback Troy Sanders stripped the ball away from Wilcox in the end zone.

On fourth down, Shaw pitched to McKinnon, who threw an option pass towards Wilcox in the corner of the end zone. But ASU cornerback DeAndre Presley — until two weeks ago, the Mountaineers’ starting quarterback and last year’s Southern Conference offensive player of the year — swatted the ball away.

In the third quarter, ASU’s defense had made another goal line, holding the Eagles on fourth down from the one.

“We needed to play better, we needed to block and tackle and do all of the fundamental things we talk about every week,” Georgia Southern coach Jeff Monken said. “We missed a lot of assignments and those resulted in big plays for them.”

Just like last year in Statesboro, Appalachian State struck early against the Eagles. The Mountaineers needed only six plays to score on their first drive when Jackson beat a blitz and found Andrew Peacock alone for a 25-yard touchdown pass against another blown coverage.

On the ensuing kickoff, Scott nearly scored on a 78-yard kickoff return, but Sanders made a horse-collar tackle to save a touchdown and the Eagles had to settle for Adrian Mora’s 22-yard field to make it 10-3.

Appalachian State got the ball back with 1:29 left in the half after Demetrius McCray intercepted his second Shaw pass and Jackson beat the Eagles’ cover two zone when he found Quick behind the secondary on the ASU sideline for a 56-yard scoring strike to make it 17-3 with 17 seconds left.

“Really, it just came down to executing on both sides of the ball,” said Shaw. “In the first half, we definitely didn’t do it. In the second half, we had opportunities and didn’t capitalize.”