The road to any championship has plenty of parts that must be put into place at the appropriate time along the way. And in workmanlike fashion Monmouth methodically laid out the components while preparing to continue on the journey along that road.

Monmouth’s impressive 47-10 win over Campbell last week gave the Hawks the Big South Conference championship for the first time in the six years of competing in the conference. The win, coupled with their win earlier this season against Kennesaw State, means the Hawks will receive the automatic bid into the upcoming FCS playoffs when that field is announced on Sunday.

While an automatic bid into the playoffs went up in smoke in a big way for Kennesaw State still has a chance to finish in a tie for the Big South championship with a win on Saturday, coupled with a Hampton upset of Monmouth.

Or the Owls could finish second in the final Big South Conference standings with a win on Saturday. And that should be enough to lift the Owls into the playoffs for a third straight season.

Or they could be left out altogether.

KSU can ill afford a loss in the regular season finale against Gardner-Webb. If that happens, it could open the door to a realm of possible scenarios when the playoff field is announced Sunday. The Owls would finish the regular season with a 9-3 overall record, again, a mark that would normally get a team a postseason opportunity.

The playoff selection would have to certainly take a look at a number of polls that have the Owls at a wide array of spots. The recent FCS Coaches Poll has KSU ranked No. 9, while the panel of experts at The College Sports Journal has the Owls ranked No. 19 this week.

Also expected to be taken into consideration if the Owls do fall this weekend would be KSU’s strength of schedule. They lost 26-23 in overtime in the second game of the season to FBS member Kent State: that’s a plus. KSU also owns a pair of lopsided wins over Point (57-0) and Reinhardt (31-7) earlier this season. Both are members of the NAIA … that could be a negative in the eyes of the voters.

North Alabama, which is transitioning into football membership in the Big South in 2020, concluded its season last weekend. The Lions finished 4-7 overall on the year after defeating Gardner-Webb 34-30 on the road in North Carolina.

The 2019 season has not unfolded in recent weeks the way Campbell envisioned. But, despite three straight losses, the Fighting Camels still have a remote chance of advancing to the FCS playoffs.

Doing so may be contingent on several things converging in the right way and at the same time: an act of God and an act of Congress. Wait, let’s remove Congress from the mix, we know the speed in which it operates. Let’s replace it with something else: a win by Campbell.

That is first and foremost. A lot of finger-crossing may also help.

A CU win would improve the Camels to 7-4 on the season and give them a 4-2 Big South record. The two leagues losses would be against Kennesaw State (38-35) and Monmouth (47-10) in the last two weeks. Depending on how the teams currently ranked 20-25, and other teams receiving votes, in the recent coaches’ poll do this weekend and, of course, a Campbell win over Charleston Southern, the selection committee’s task becomes even more difficult. A Campbell loss means adios, good-bye to 2019 for the Camels.

Charleston South has already been eliminated from playoff contention, but still has incentive to finish the season with a win. That would move the Buccaneers into at least a third-place finish in the BSC standings and even their overall mark to 6-6. That would give them plenty of optimism heading into the offseason as CSU prepares for the 2020 season.

Campbell just might have the most balanced offense in the Big South this season. The Fighting Camels enter this week’s contest by averaging 182.3 yards per game on the ground and 196.7 yards through the air. Their total offensive output of 379.0 yards may be lower than some teams in the league but is something that certainly makes foes remain on their toes when devising a game plan to stop the Camels.

Key players: QB Hajj-Malik Williams operates the CU offense nicely and has accounted for nearly 2,500 yards of offense on the season. He has completed 136 of 237 passes for 1,898 yards and has thrown for 16 touchdowns against eight interceptions. Williams has also picked up a team-leading 590 rushing yards on 134 carries (4.4 ypc) and an additional seven scores. Teammate Johnathan Hawkins is not far behind. He has rushed 111 times for 481 yards (4.3 ypc) and six scores of his own.

Like Saturday’s opponent, Charleston Southern prefers going to the air with more regularity than pounding the football down the field the way the Big Ten Conference once glorified the run game and the accompanying dust.

But, unlike the Camels, CSU has a more profound success rate filling the air with the ball. The Buccaneers average 208.2 passing yards per game, significantly higher than the 142.3 yards per contest on the ground.

What do all the offensive numbers mean? Heck, maybe nothing. That’s why the game is played on the field instead of on paper.

We will see on Saturday if the numbers mean anything.

Key players: Jack Charles, like his Campbell counterpart, leads his team in rushing and passing the football. Charles has compiled a team-high 464 yards on the ground after carrying the ball 90 times (5.2 ypc) and has scored five touchdowns. Teammate Ronnie Harris is not far behind with 396 yards on 102 carries (3.9 ypc), but has yet to reach paydirt.

Rushing production falls off after that. Terrance Wilson has added 243 yards on 61 carries (4.0 ypc) and three touchdowns. In all, the Bucs have rushed for just 11 touchdowns this season.

Charles has completed 174 of 304 passes for 1,812 yards and 10 scores this season. He has 2,276 combined yards of offense for the Buccaneers. However, and it’s a big however, Charles has thrown more interceptions (12) than touchdowns (10).

Kameron Brown paces CSU with 39 receptions for 513 yards and seven touchdowns this season. He has appeared in nine of his team’s 11 games so far.

Campbell may have a collective chip on the shoulder after watching the possibility of a lofty conference finish slip away and hoping to take their frustrations out on someone, anyone. But, it won’t be easy: Campbell 31, Charleston Southern 30 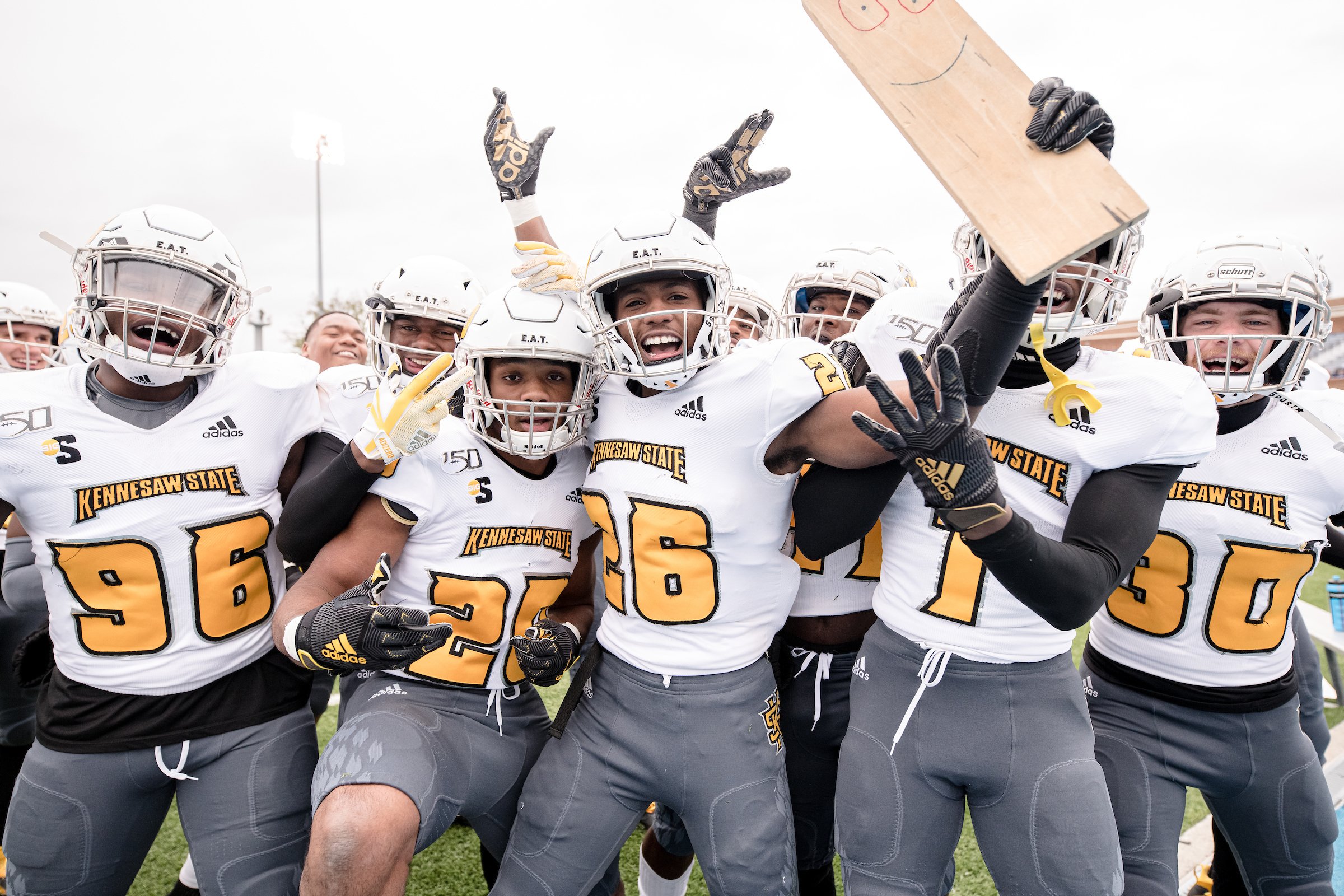 After sloshing through the rain, the mud and the muck, Kennesaw State saw its season end a year ago with a 27-17 loss at home to South Dakota State in the quarterfinal round of the FCS playoffs.

A return to the playoffs again is not a foregone conclusion as the Owls have plenty of question marks surrounding them at this point of the season.

Chief among those is the less than balanced offense. One of the best teams in the nation at running the football, the ability to pass the ball could best be described as the polar opposite. The Owls attempt fewer than nine passes per game this season and have completed an average of just four passes per contest.

Gardner-Webb has played well at times this season, but with so much on the line for the home team: Kennesaw State 35, Gardner-Webb 21.

Monmouth has turned the corner in a big way since an early season loss to powerful Montana. Now, the Hawks are moving forward with a full head of steam as they await the playoff announcement on Sunday.

Monmouth secured the first Big South Conference title in school history last weekend and has a chance, albeit outside chance, of earning one of the eight seeds and a bye in the first round.

The Hawks take a seven-game winning streak into Saturday’s game against the Pirates. Monmouth has not lost since falling to Montana 47-27 on Sept. 21 in Missoula. The Griz were ranked No. 19 in the nation at the time and are currently holding down the No. 3 slot in the recent coaches’ poll. Monmouth, ranked No. 12 in the same poll should have little trouble in extending its streak to eight games: Monmouth 42, Hampton 17.

Wins on the field have been few and far between for Presbyterian, but the Blue Hose should be able to end the season on a high note as they head into the offseason and prepare for a new chapter of PC football. The school will wrap up its stay in the Big South Conference on Saturday when St. Andrew’s University visits Clinton.

The Knights, who compete in the MidSouth Conference, are an NAIA team and should provide little opposition to the Blue Hose: Presbyterian 24, St. Andrews 10.