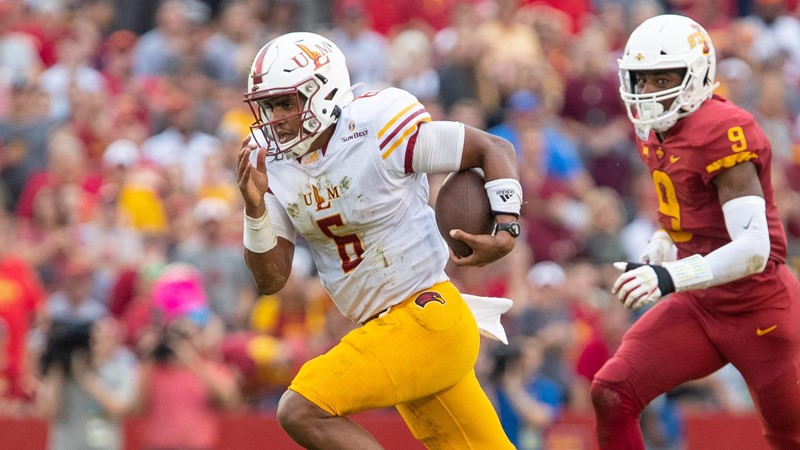 Six players including Caleb Evans from ULM, Malcolm Perry from Navy, Victor Tucker from Charlotte, Dustin Crum from Kent State, Ivan Pace Jr. from Miami (OH), and Jose Borregales from FIU have been selected as the College Sports Journal All-Stars for the week ending Nov. 25th, 2019 from the NCAA Division I FBS Group of Five schools. Caleb Evans, QB, Louisiana-Monroe, Sr., Mansfield, Tex.
Evans accounted for a season-high 415 yards of total offense and three scores to lead ULM to a 45-42 victory over Coastal Carolina. He completed 20-of-34 throws for a season-best 349 yards, two touchdowns and one interception. He hooked up with Markis McCray for a school-record 98-yard scoring play in the first quarter, and his 34-yard TD strike to Zach Jackson with 6:47 left in the fourth quarter proved to be the game winner. It marked Evans’ first 300-yard passing game of the season and ninth of his career. He completed passes to eight different receivers. Evans also rushed nine times for 69 yards, including a 32-yard TD run late in the third quarter. With his performance against Coastal, he became only the second quarterback in ULM history to eclipse these two career milestones: 9,000 passing yards and 11,000 yards total offense. 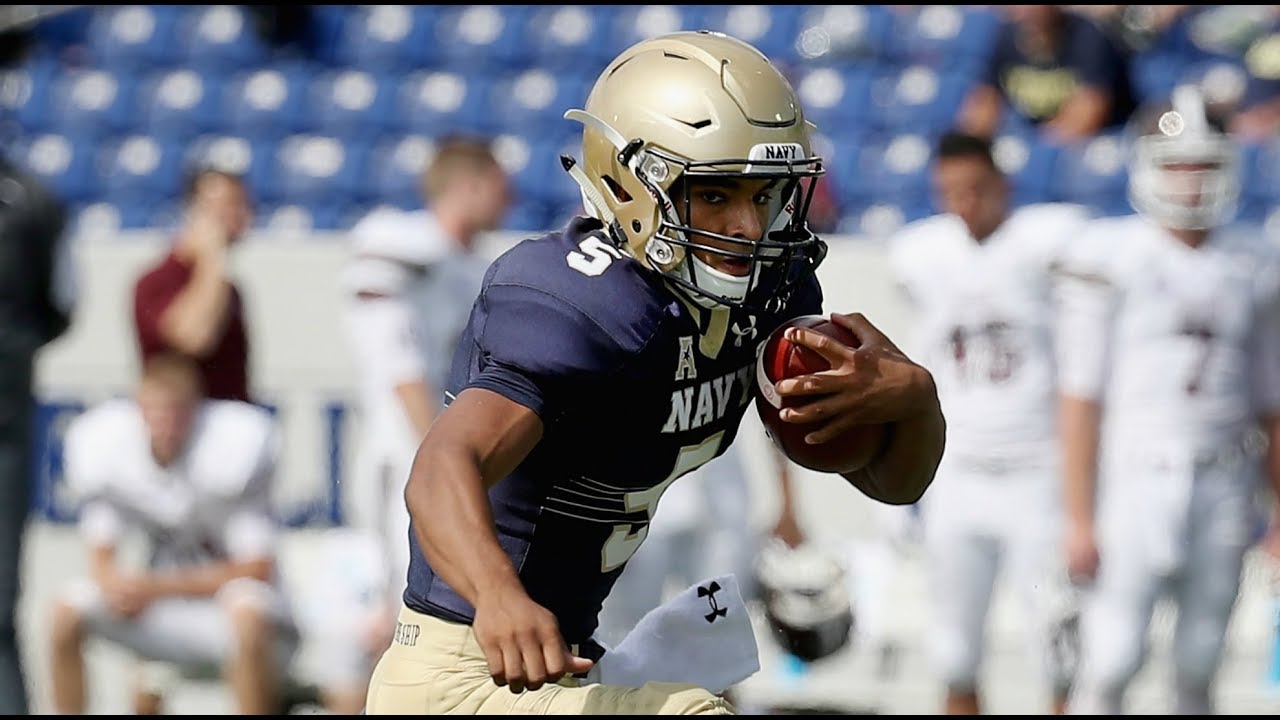 Malcolm Perry, QB, Navy, Sr., Clarksville, Tenn.
Perry helped Navy remain in the hunt for an American West Division title as he led the Midshipmen to a 35-28 win against No. 21 SMU. Perry rushed for 195 yards and two touchdowns on a career-high 38 carries, while he completed 9 of 15 passes for 162 yards and a TD. Perry’s 70-yard touchdown run with 6:11 left broke a 28-28 tie and capped Navy’s comeback from a 21-10 halftime deficit.

Victor Tucker, WR, Charlotte, So., Miami Gardens, Fla.
Tucker scored a pair of fourth quarter touchdowns as Charlotte rallied past Marshall to become bowl-eligible for the first time in school history. He also posted his fourth 100-yard receiving game of the season with five catches for 121 yards. All four of Tucker’s 100-yard receiving games have come against C-USA foes. He scored on a five-yard end around to give the 49ers their first lead of the game and then caught an acrobatic 25-yard TD pass on fourth and 10 with 48 seconds left to seal the win. It was Charlotte’s school-record sixth win of the season. 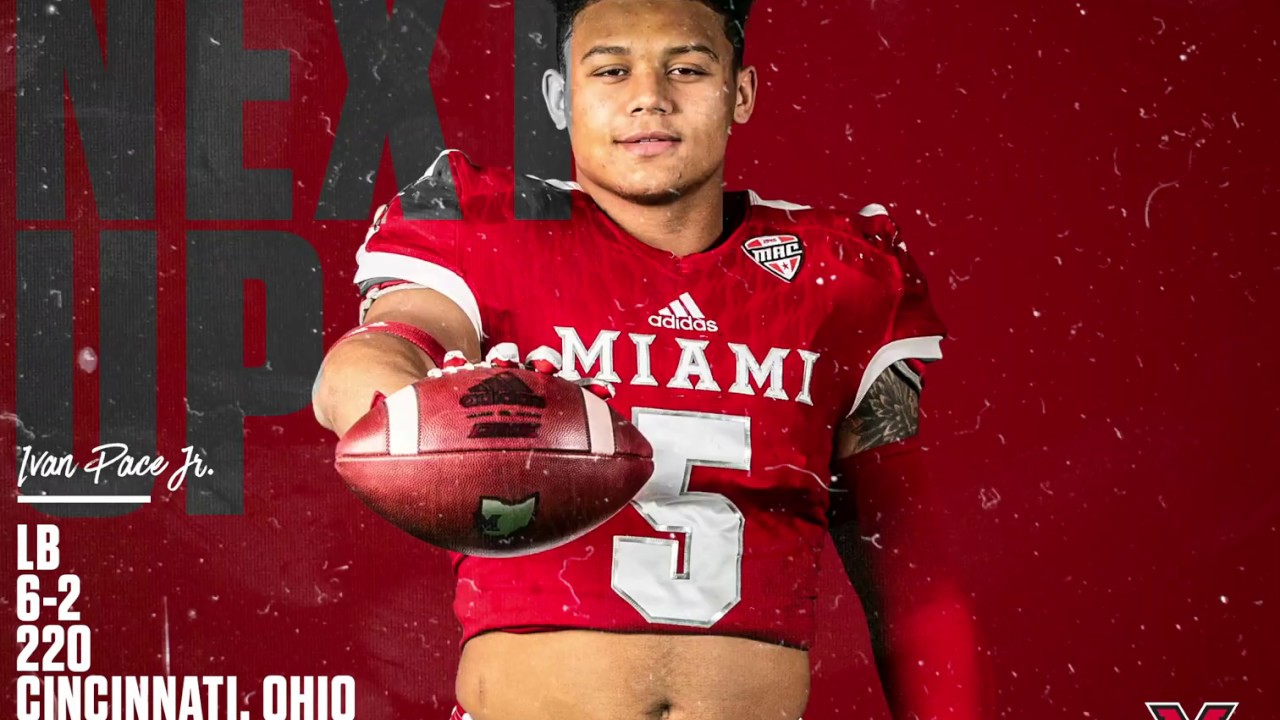 Ivan Pace Jr., LB, Miami (OH), Fr., Cincinnati, Ohio
Pace Jr. recorded six sacks in a 20-17 win over Akron on Nov. 20. The six sacks match an NCAA record for sacks in a single game. An accomplishment that has only been recorded three times in NCAA history, last happened back during the 2006 season. Pace, a true freshman, recorded those six sacks on just 18 defensive snaps played.

Borregales made three field goals in FIU’s 30-24 win over Miami (FL), with two being 50 yards or longer. The junior kicker hit from 29, 50 and 53, with the 53-yarder tying a school record that was set by Borregales last season. His three field goals early on helped build a 16-0 lead over the Hurricanes in the third quarter. In addition to his field goals, Borregales was 3-for-3 on extra points and had seven kickoffs for a 60.6 average with three touchbacks. Borregales now has 258 career points, tying FIU’s all-time mark for most points scored by a player.