Four players including Jordan Robinson from Sacramento State, Elijah Ibitokun-Hanks from Albany, Tyler Williams from Central Arkansas, and Cameron Stubbs from Dayton have been selected as the College Sports Journal All-Stars for the week ending November 13th, 2016 in the NCAA Division I Football Championship Subdivision. 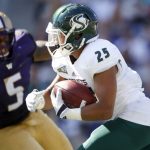 Robinson has been through many things as senior. However, in his final home game in Hornet Stadium, Robinson had a performance for the ages, rushing for 262 yards and four touchdowns, in a 42-35 Sacramento State win over Portland State. His touchdown scores came on rushes for 75, 40, 30 and 9 yards, with the final touchdown breaking a 35-35 tie, with 1:56 remaining. Robinson had the first 200-yard rushing game for Sacramento State since Bryan Hilliard in 2008, while earning 300 yards of total offense. 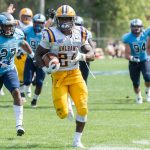 Ibitokun-Hanks rushed for a program-record 298 yards and three touchdowns on a career-best 39 carries as Albany rallied from a 22-0 deficit to post a 36-25 victory at New Hampshire. Ibitokun-Hanks’ 298 rushing yards broke Albany’s record that stood since 1975, while marking the third-best performance at the FCS level this season and the eighth-best in CAA history. All three of Ibitokun-Hanks’ touchdowns came in the second half, including a 13-yard run that sealed the victory over UNH with 3:19 remaining. With the effort, Ibitokun-Hanks upped his single-season total to 1,383 rushing yards which ranks fifth all-time at Albany. 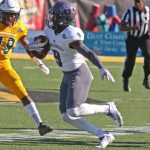 Williams had four tackles, broke up five passes and intercepted two passes in UCA’s eighth consecutive victory. Williams picked off passes on Nichols State’s final two possessions of the game to seal the 31-24 Bear win. Williams has a team-high four interceptions this season and is tied for second in the Southland Conference. His 19 pass breakups is No. 1 in the conference. 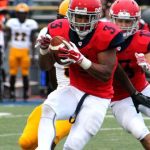 Stubbs returned four kickoffs for an average of 50.7 yards per return in the Flyers 59-31 victory over Marist in Pioneer Football League play. He had two 90-yard returns. His first was a 95-yarder that set up Dayton’s first TD one play later. His second came in the fourth quarter, and was a 90-yard return for a touchdown that essentially sealed the win. Stubbs leads the PFL in kickoff return average (28.7) and is fourth in FCS football. Even though his career average of 27.5 yards per return is the second-best in Flyer football history, the TD return was the first of his career.