Four players including Devin Hodges from Samford, Mike White from Marist, Ezra Robinson from Tennessee State, and Miles Bergner from South Dakota have been selected as the College Sports Journal All-Stars for the week ending October 16th, 2016 in the NCAA Division I Football Championship Subdivision. 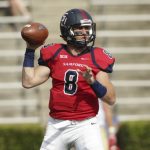 Hodges completed 35-of-50 passes for a career-high 435 yards in Samford’s 55-21 win over VMI on Saturday afternoon. Hodges also tied a career high with five touchdown passes in the win, as he connected on touchdown passes from 3, 5, 7, 9 and 16 yards out. Hodges leads the Southern Conference and ranks third nationally with 345.0 passing yards per contest. His 22 touchdown passes on the season rank third in FCS. 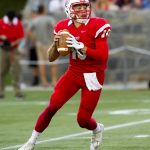 White accounted for all six touchdowns in Marist’s 44-41 PFL overtime victory at Morehead State, Saturday. He completed 18-of-31 passes for 377 yards and threw five touchdowns, including a 32-yard game-winner in overtime – one of four touchdown passes covering 20-plus yards on the day. White also had nine carries for 36 yards, including a 21- yard touchdown run for Marist’s first score of the game. His six touchdowns are the most a PFL quarterback has been responsible for in a game this season. In addition, his 413 total offensive yards are the second most in a single outing across the league this season. 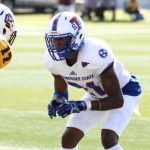 Robinson had two interceptions, including one he returned for a 93-yard touchdown in the second quarter, as Tennessee State topped Eastern Kentucky 35-28 to improve to 5-1 on the season. The senior stepped in front of a Bennie Coney pass to grab the interception which put TSU up 21-0 early in the second quarter; the 93-yard return is the fourth longest in the FCS this season. His other interception came with just over 10 minutes to play in the game and EKU at the TSU 8-yard line; Robinson grabbed Coney’s pass and helped TSU ultimately flip the field as the Colonels made a furious second half rally to came up just short. Robinson also added five tackles (4 solo) and had two pass breakups while helping keep EKU’s top wide receiver Devin Borders (5 touchdowns entering the game) out of the end zone. Robinson currently ranks fourth nationally in passes defended (1.8/game) and sixth in interceptions (0.7/game, 4 total). 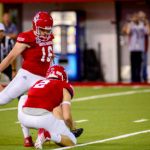 Bergner made four field goals in South Dakota’s 33-30, double-overtime win on the road at Indiana State Saturday including two 41-yard field goals in overtime. His 49-yarder in the first quarter made him the Coyotes’ all-time leading scorer. He also connected from 38 yards in the third quarter. His first kick of overtime tied the game and forced a second overtime. His fourth field goal turned out to be the game winner. Bergner stands atop the Coyote record book with 247 points. In addition to his place-kicking duties, Bergner had five touchbacks on six kickoffs and averaged 42.8 yards per punt. He pinned two inside the 20 and had two of more than 50 yards.