Four players including Gage Gubard from Eastern Washington, Eli Dunne from Northern Iowa, John Haggart from Stony Brook, and Connor Mitchell from Murray State have been selected as the College Sports Journal All-Stars for the week ending October 23rd, 2016 in the NCAA Division I Football Championship Subdivision. 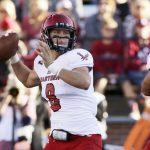 Gubrud put on a clinic against the Montana State in the Eagles 41-17 victory. He threw for a school-record 520 yards, finishing with 538 yards of total offense. Additionally, the sophomore quarterback had four touchdown passes, all to different receivers. In just seven career starts, Gubrud owns six of the top-11 total offensive performances in Eagles history, and five of the top 18 passing performances. .His 538 yards of total offense were second in school history to the 551 he had against Washington State on Sept. 3. Gubrud leads the FCS in passing yards per game (410.1) and total offensive yards per game (463.3). 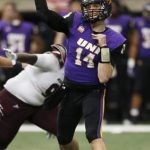 In his first career start, Dunne racked up a career-high 418 yards and two touchdowns on the way to a 61-7 win over Missouri State. Dunne’s first 12 passes of the game were completions. He finished 25-for-33 with no interceptions, getting a total of 10 players at least a catch in the game. He averaged 16.7 yards per completion, finishing the game with seven passes of 20-plus yards. He is the first UNI quarterback to pass for over 400 yards since 2009 when Pat Grace went for 445 against South Dakota. He also set the school record for passing yards in a game by a first-time starter with his 418 against the Bears. 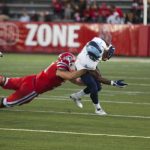 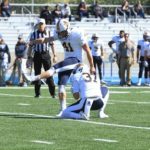 Mitchell set the Murray State record in going 6-for-6 on field goals as the Racers won for the second time, 40-38 at Ohio Valley Conference rival Eastern Illinois. Mitchell connected from 37, 36, 37, 49, 25 and 29 yards, and added two PATs to finish with 20 points. He was one field goal shy of the OVC single-game record. His career game boosted him to 14 field goals (in 18 attempts) this season, which is tied for the best in FCS.