Five players including Chase Edmonds from Fordham, Corey Avery from Sam Houston State, Taryn Christon from South Dakota State, Montrell Pardue, and William Will from Dayton have been selected as the College Sports Journal All-Stars for the week ending October 9th, 2016 in the NCAA Division I Football Championship Subdivision. 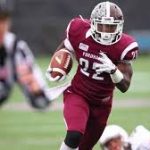 Edmonds broke his own single-game rushing record with 359 yards, while posting his third-straight four touchdown game in the Rams 58-34 win over the Leopards. Edmonds also broke the Patriot League career points record, surpassing former Colgate star Jordan Scott in the first half against Lafayette. His 21.1-yard average (359 yards on 17 carries) set the FCS single-game record by more than two yards per carry. 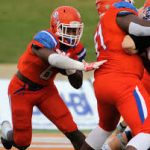 Avery set a career-high with 212 rushing yards on 17 carries and four touchdowns in Sam Houston State’s 63-48 win at UIW. The junior from Dallas, Texas (Carter H.S.), averaged 12.5 yards per carry. In the first half, Avery had 107 yards on eight carries while finishing the second half with 105 yards on nine carries. His first two touchdowns came on runs of 54 and 56 yards. Avery is currently 13th on the Sam Houston all-time rushing list with 1,956 career yards.

Christion set a SDSU school record with 466 passing yards and tied a career-high with five touchdown passes in the Jackrabbits 45-39 victory at Southern Illinois on Oct. 8. Christion completed 32-of-51 pass attempts in the game, connecting with eight different receivers. It marked the second week in a row Christion has thrown for five touchdowns as he upped his season total to a remarkable 20 against just one interception. 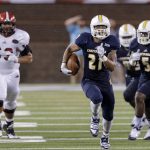 Pardue tied his career high with eight tackles in UTC’s 52-31 homecoming win over Mercer. He was credited with two tackles for loss, resulting in minus-11 yards. Midway through the third quarter, the sophomore stepped in front of Mercer quarterback John Russ’ pass and returned it 29 yards for a touchdown, which was his second career score after returning a fumble for a touchdown against Jacksonville State in 2015. 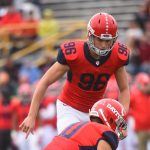 Will tied the Pioneer Football League career field goals record with his three-kick outing in Dayton’s 51-27 victory against Morehead State. He finished the day with 15 points, adding a 6-of-6 PAT outing to his 3-of-3 field goal effort. Will connected on a 20-yard field goal to give Dayton a 10-0 lead in the second quarter, then tacked on field goals of 38 and 49 yards on consecutive drives in the third. The 49-yard kick was the longest of his career and tied the longest kick in the PFL this season. Will’s final field goal also was his 49th career field goal, tying the Pioneer Football League record held by Drake alumnus and former NFL kicker Billy Cundiff. He also handled kickoff duties for the Flyers, his 10 kickoffs averaging 61.4 yards with five touchbacks.