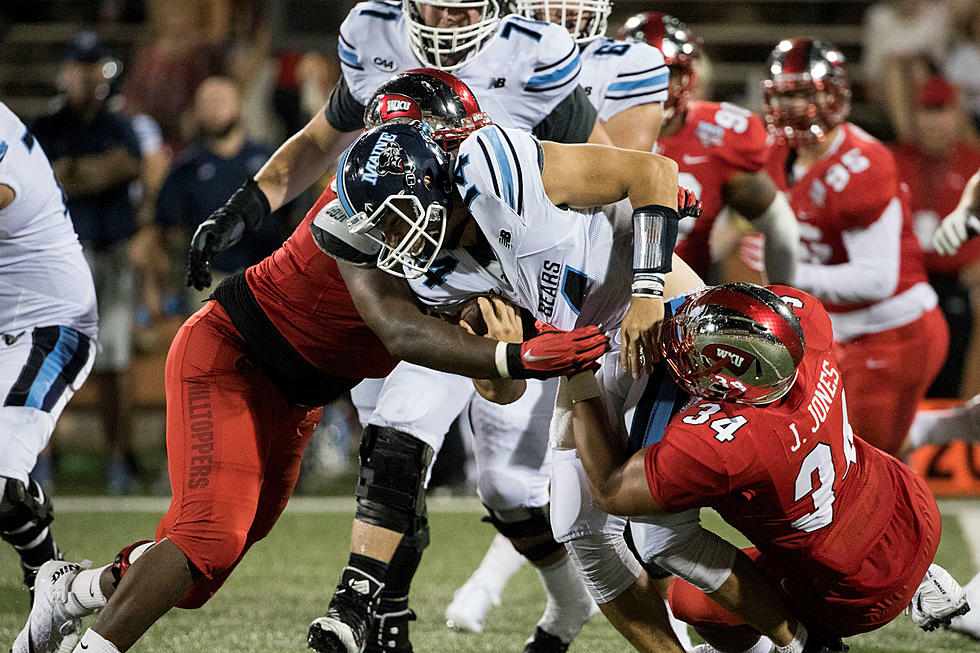 After two weeks, many teams are starting to show the FCS nation who they are. Some teams are racing up the ranking, while some are plummeting down after starting 0-2.

There was only one FCS over FBS win this weekend. Maine went down the Western Kentucky and defeated the Hilltoppers despite falling behind 21-0 early in the game. Samford did not ultimately come away with the win, but the Bulldogs but a huge scare into Florida State before falling late.

New Hampshire continued its poor start, losing to Colgate, while only mustering 3 points. Furman went into their matchup with Elon expecting to show they were a serious contender in 2018, but the Phoenix wound up humbling the Paladins 45-7

This weeks poll includes 6 teams from the CAA, 5 Big Sky, 4 MVFC, 4 Southland, 2 Southern and 1 each from the Ohio Valley, MEAC, Big South and Ivy.

The Bison had an early bye week this year. If asked, the coach Chris Klieman would rather have the off weekend later in the season. Nonetheless, the Bison will be ready for new FCS member North Alabama when they come to the Fargodome.

The Dukes only got one quarter of football in the books before weather forced the cancellation of their game against Norfolk State. James Madison wound up with the 17-0 win and will welcome Robert Morris to Bridgeforth Stadium in the home opener. The Dukes should roll easily this week.

Cade Johnson was out to prove that the Jackrabbits would not miss Jake Wieneke and Dallas Goedert as much as the pundits thought. Johnson had 9 catches for 138 yards including catching all four of Taryn Christion’s touchdown passes in a blowout win over Montana State. South Dakota State should win easily this weekend against Arkansas-Pine Bluff.

Lamar Reynard really hasn’t gotten going so far this season, but it hasn’t mattered to this point for the Aggies. The running game has picked up the slack for the offense including a 283 yard performance against Gardner Webb. A&T has a much deserved week off this week before starting MEAC play in week 4.

The Bearkats resisted a tough test from Prairie View in a shootout victory. The graduation of Jeremiah Briscoe was felt as new quarterback Mike Dare went 20-40 for only 169. Dare did add two touchdowns and also threw 2 interceptions. Sam Houston will have to be much better this week when North Dakota comes to town.

Behind 322 yards and 4 touchdowns from Gage Gugrud, the Eagles defeated Big Sky foe Northern Arizona in a game that was considered non-conference. Eastern Washington has shown that they are back in the picture after a bit of a down year in 2017. This week, the Eagles take on FBS in-state foe Washington State. A win here would catapult Eastern Washington firmly into the national title picture.

Kennesaw State put their opening week loss behind them and trounced Tennessee Tech 49-10. The Owls showed their identity, running for 507 yards and 7 touch downs. KSU was led by Chandler Burks with 3 touchdowns. This week the Owls take on Alabama State in what should be another lopsided win.

Samford nearly pulled off the biggest upset of the early season against Florida State. The Bulldogs had a lead in the fourth quarter before FSU scored a touchdown to take then lead and then ran back a Devlin Hodges interception for a touchdown to provide the final margin. Hodges threw for 475 yards and 2 touchdowns in the game. Most of the damage went to Kelvin McKnight who had 14 catches for 215 yards and both touchdowns. Samford should bounce back and easily defeat Mercer this week.

Villanova continued its hot start to the season by easily beating Lehigh. Zach Bednarczyk threw for three touchdowns and masterfully directed the offense. On the defensive side of the ball the Wildcats forced two turnovers and held Lehigh to just 176 yards of total offense. Villanova looks like a complete team. They get their first CAA test this week against an underappreciated Towson team. This game will be another stiff test for the Villanova defense.

Maine continues to be the story of the early season. One week after dominating New Hampshire, the Black Beats went to Western Kentucky and defeated the Hilltoppers despite falling behind 21-0 in the first quarter. Maine gets a week off before taking on another FBS opponent Central Michigan.

Nicholls was unable to pull off consecutive FBS upsets in a loss to Tulane that was never really close. That should not take any shine off the Colonels. They are a very good team. They will get a chance to prove it this week against McNeese State on the road. This game could help determine playoff bids later in the year.

Elon avenged its 2017 playoff loss in convincing fashion, dominating Furman 45-7. The Phoenix took it to Furman with a dominant run game and an efficient, yet effective, game from Davis Cheek. Elon opens CAA play on the road this week in a game they should win against Williams and Mary.

Weber State got back in the win column playing a much closer game that anticipated against Cal Poly. The Wildcats have a long way to go to remain in contention in the Big Sky. This week they face a tough test when South Dakota comes to town as part of the Big Sky/MVFC challenge. Weber could struggle to stay in the rankings over the next few weeks as the scheduled toughens up.

Wofford hammered VMI as anticipated last week. As usual, the Terriers used a number of runners in amassing 450 yards on the ground. Wofford also had 3 different players throw passes, combining to go 15-17 for 221 yards and two touchdowns. If the Terriers can add the passing element to their game with more regularity, they could be a tough team to deal with. This week Wofford travels out to Wyoming to match up with the Cowboys.

Montana started a little slow but wound up dominating Drake in the second half. Dalton Sneed threw for 278 yards, ran for 65 and added three touchdowns in the convincing win. For the second time this year, the Grizzlies will face an MVFC opponent when they travel to Western Illinois. If Montana wins this game, look out, the Grizzlies could be back in the national picture

Central Arkansas was able to defeat Murray State behind 301 passing yards from new quarterback Breylin Smith. The Bears are looking to repeat as Southland champions and will get a stiff test this week from Southeast Louisiana. SELA wants to be considered one of the top teams in the Southland and will give Central Arkansas everything they can handle.

Stony Brook jumped out to a 20-0 lead and never looked back against Bryant. The Seawolves got over 100 yards rushing from both Jordan Gowins and Donald Liotine to support quarterback Joe Carbone who struggled in the passing game. Carbone will have to be better for Stony Brook to be successful in the CAA. This week the Seawolves visit in state rival Fordham in a game they should win.

Austin Simmons is out to make everyone forget about Chris Streveler for South Dakota. Simmons had 462 yards and 4 touchdowns passing, plus 80 yards and a touchdown on the ground in a dominating win over Northern Colorado. There are even some whispers out of the MVFC that Simmons may even be better than Streveler. Lets see how he fairs this week on the road against Weber State, a game South Dakota should win.

McNeese easily defeated Houston Baptist in a game they should have won easily. The Cowboys are one of the teams bunched at the top of the Southland conference and have a shot to separate themselves on direction or another in a potential game of the week matchup against Nicholls State.

Illinois State dominated in all facets of the game against Eastern Illinois. The Redbirds are kind of a forgotten team in the MVFC landscape but they are out to prove they still belong. They are off this week but travel to Colorado State next week before getting into the MVFC schedule.

UC Davis followed up its win over San Jose State by blowing out perennial Big Sky playoff killer San Diego. The Aggies got 302 passing yards from Jake Meier. UCD is 2-0 without a huge contribution from superstar wide receiver Keelan Doss. They’ll get a pass this week when they lose to Stanford but the Aggies will have plenty of chances to prove they belong in the Big Sky talk after that

Northern Arizona lost the game to Eastern Washington, but they hope they have not lost their quarterback as well. Case Cookus left the game with an injury and to this point his future status has not been disclosed. The good thing for the Lumberjacks is that they have a week off this week which gives Cookus an extra week to get healthy.

The early season darlings of the FCS, Rhode Island put together a complete performance in a big win over Albany. JuJuan Lawson threw for 317 yards and 4 touchdowns to lead the Rams to their first 2-0 start in CAA play since 2001. This week Rhody takes on Connecticut. A win here would really shoot their star high.

Yale is predicted to win the Ivy League in 2018. To start the season, they travel to Holy Cross, a team they should beat. The Bulldogs have their eye on an undefeated season in the Ivy League and start their season ranked in the top 25