Skip to content
HomeCollege Sports JournalNCAA Division I SportsFCS FootballCSJ 2018 Week 9 Preview: Georgetown at Colgate, How To Watch and Prediction 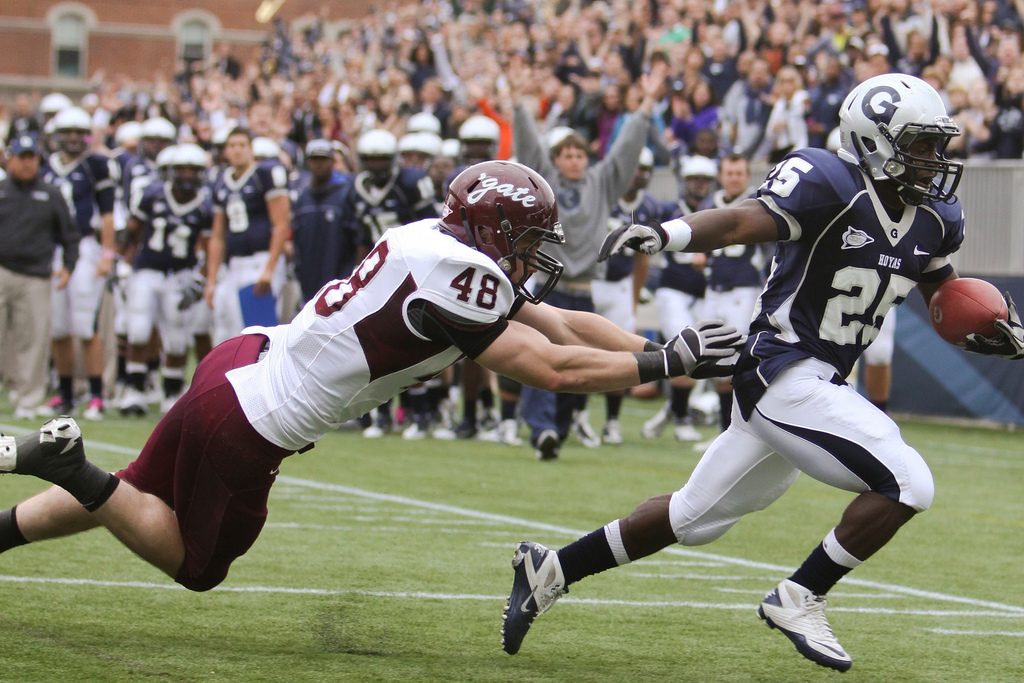 The Georgetown University football team plays its final road game of the season when it travels to Hamilton, New York to take on Colgate in a matchup of the final two unbeaten teams in the Patriot League.

Key Player: DL Khristian Tate is a 6’0 280 lb defensive end that is the latest of an impressive string of Hoya defensive ends that have come through Georgetown over the years, and he leads the Hoyas in sacks. Where he’ll need to be best this week however is stopping Colgate’s running game, where the Hoyas are only yielding 109 yards per contest.

Fantasy Bonus Baby: RB Jackson Safford got going late in the game last week against Lehigh, scoring two touchdowns in two overtimes and in the process getting up to 50 yards rushing. Can he get some yards and maybe a score against the stingiest defense in all of FCS?

It’s Showdown Saturday in the Patriot League, as Colgate and Georgetown face off with 3-0 conference records and first place on the line.

The Raiders are riding a streak of five straight games without allowing a touchdown. Colgate has outscored opponents 46-0 in the first quarter and 113-3 in the first half.

The Raiders lead the nation in scoring defense at 3.8, while Georgetown is tops in the country with 15 interceptions.

It’s also Senior Day in Hamilton, and the Raiders are recognizing 28 departing seniors in pregame ceremonies on the field Saturday.

Key Player: LB T.J. Holl is the closest thing this all-around stifling, no-name defense has, with 60 tackles (30 solo), 9 1/2 tackles for loss (3 sacks), 2 forced fumbles, a fumble recovery, and a blocked kick. He’s likely to be a huge disrupting factor to the Georgetown offense.

Fantasy Bonus Baby: Ageless RB James Holland has finally gotten healthy and leads the Raiders in rushing with 506 net rushing yards and 5 TDs. Though Colgate will rotate a bunch of backs, he’s definitely the top guy and if he gets going against the Hoyas, they’re in trouble.

Fearless Prediction: It’s tempting to predict a game with 6 safeties, based on the weather and the two stingy defenses, but at home, behind Holland, Colgate could be too much for the Hoyas. Colgate 24, Georgetown 0